Tea Addiction: A Warning from the Sixties

Back in the Sixties there was a massive band, called the Rutles. They took the world by storm, spawning imitators and competitors.  In a parallel universe, it's said there was a similarish group called the Beatles. I think I've heard of them, but The Rutles. Oh man, everybody had a few Rutles albums in the attic, or the basement. Mongolian Yak-herders, Bolivian coca pickers, eskimos, arapahoes, everybody knew the Rutles, you could walk into a jungle long house in Sarawak, or a labour-camp in Siberia, and be pretty sure that if you hummed a couple of bars of a Rutles tune, everybody would soon join in.

Today's generation have never heard of them. Why? Well. It was their discovery and subsequent heavy use of a controversial, yet not illegal, mind expanding substance.


Given the hard-core resistance to, and revulsion for Tea in the United States,
and the rumours surrounding its use, the band never recovered.
Posted by soubriquet at 3:00 pm 1 comment:

Well, it's likely some of my U.S readers won't appreciate this, but come on guys, how do you think we feel about Dick Van Dyke in Mary Poppins, or every other comedy (or unintentional comedy) which portrays false stereotypes?


Top gear... If you don't know the show (not the current north-american made franchise, the real one with Clarkson, Hammond, and May), then you won't know that the whole show's firmly tongue-in-cheek, and they play these kind of stupid stunts everywhere, especially here in britain. You might say they're lucky to be alive..... Hammond is, after a front tyre blew out on the rocket powered car he was driving for the show, in 2006, flipping it end over end at 280mph. As the other presenters said,  after several days vigil in the intensive care unit, they knew he'd be okay, because he took the impact on his head.

I posted the full episode of the u.s. challenge, back in 2007, but it was hosted then by google video, and that code no longer works.  Thanks KT in Australia for letting me know. This one's direct from Top Gear's own website, using the embed code they supply. Fingers crossed..... Publish...

The Clash of the Chap-Hop-Champions

Posted by soubriquet at 7:55 am No comments:

On Correlation and Causation

Over at Lola's Loves,  Lola tells us of a Russian scientist, reported in Pravda, as publishing a study that says "Men become impotent because of women's low-cut dresses and bare legs", this, he says is due to his study showing that in societies where women are dressed demurely, or covered head to toe, i.e. Islamic nations, there's a much lower incidence of erectile dysfunction and prostate problems.


I recently read a blogpost in which the author was pointing out the ways in which correlation and causation are  too often conflated.
He prints pairs of graphs with similar curves, and invites us to make connections between them, only, of course, the connections are nonsensical.
Seeing these connections, we're reminded that some more apparently connected graphs we see in newspapers and magazines aren't necessarily proof of what the writer's trying to claim. 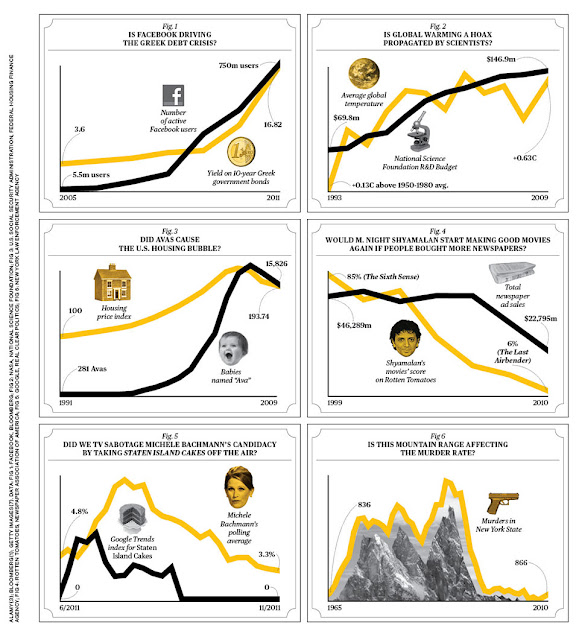 I think Pravda should consider these examples, when deciding if it's the view of ladies thighs, and cleavages that causes men's troubles in western societies. Poor ole Hugh Hefner.....

So recently, touring through my archives, a vast underground labyrinthine repository of scribbles, notes, photos, diaries, ideas etc, I found a clipping from the interwebs of 2008, on the evils of bread.

I'll stay away from the dangers of loaves and fishes. Here we go:

(Source unknown, I didn't write it).


In light of these frightening statistics, we propose the following bread restrictions: