Absconding, Absolution, and a Bridge. 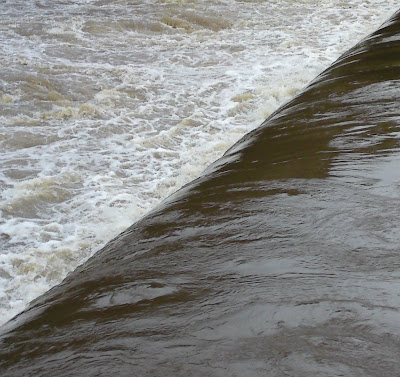 I absconded from the jobs I should have been doing on saturday morning.. I had a few groceries to buy, and that could have been done within moments of home, but I lost control of the vehicle I was driving and before I knew what was happening it had taken me out of town, onto the narrow lanes between the fields. At that point, well, I gave up, I could have yelled at it to turn around, and go home, but I just gave in, and sat back to see where it would take me.
Nobody explained this to me, I've always had manual cars, but when you get an automatic, well, it seems they just decide for themselves...
So before I knew it I was about ten miles from home, in Wetherby.  And in Wetherby there are a lot of places to buy books, and books are to me what shoes are to women. I can't help myself.
So I bought a few books. No, only a reasonable number, no more than I could carry in a large shoulder-bag...
Then I was feeling a little hungry, so I dropped in to the Wetherby Whaler fish'n'chip shop, for chips, scraps, curry-sauce, onion-rings and a barm-cake, and down the road to the river-path.  The river was carrying last week's storm water, and was quite busy, so I left it to do its job, and sat on a bench, browsing my new books, and eating. 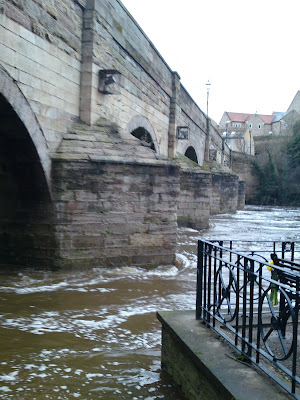 Not a bad place to pause.
The bridge has seen a fair bit of history. One of britain's major north-south routes passes here. Nowadays, the main highway bypasses the town to the east, but for a couple of thousand years, if you were travelling from London to Scotland or vice-versa, you'd cross the river Wharfe here. The Roman legions did.  The Emperor Constantine did.
There were other crossings, of course, roman forts abounded, but this route, this route became known as "The Great North Road". Yes, there are other Great North roads in the world, in America, Canada, Australia, New  Zealand, Zimbabwe, but all of them are subsequent to this one.
Back in the early 1200s, Wetherby had become a stopping place, a little town. There was already a weir on the river, and a mill, milling corn. (not maize, we didn't have maize back then)
There was no bridge. You had to get in there and wade. Not too difficult in a dry summer, maybe, but not so good the rest of the year. Both north and south of the river there would have been inns, because you might just have to spend the night, or a few days, or weeks, waiting for the river crossing to be passable.
Back in 1233, the Archbishop of York, Walter de Grey, decided there ought to be a bridge there. But who'd pay for such a costly edifice? not the church, it had to be the people, the travellers,  the noblemen, the merchants. They all had a vested interest in the crossing, and a bridge would secure the little town's fortunes, in much the same way as cities these days look to airports to ensure trade and income.
Some money was raised, but not enough, until wily Archbishop Walter came up with the great idea that anybody paying over a certain amount could apply to Walter to have all his sins up to date forgiven, expunged, forgotten. After that the money came rolling in, stone quarries either side of the river rang to the sound of hammers and wedges, and a handsome bridge arose.
Surely, though, I hear you say, not that bridge there? I mean, it looks old, but not that old? 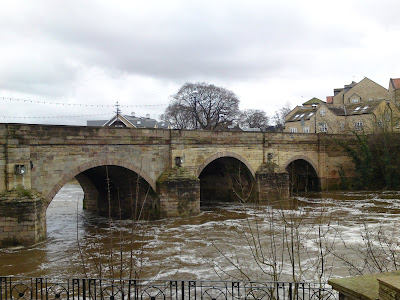 Well, yes and no. What you see here is quite young. After a flood damaged the original  bridge, it was repaired and the roadway widened, from ten, to twenty feet wide, in 1773. There's some more recently repaired stone-facing since.
Then in 1826 the bridge was widened again, this time on the downstream side.  You can also see where the original rise and fall of the roadway was levelled out, and a newer parapet made.
Still, if you go down to the water, and look carefully.... 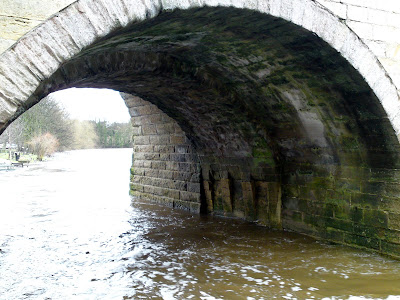 You can still see Walter de Grey's first bridge, tucked into the centre of the current edifice. 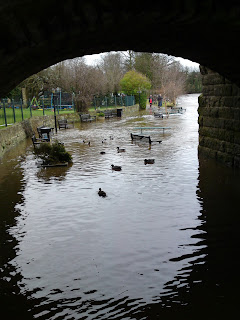 Normally, this is a quiet riverside stroll, with people sitting on the benches to watch the world go by, a quiet route from the riverside car park to the town centre. However, as it often does, the river has reclaimed the nothernmost arch for a while. but here it's peaceful enough for the ducks, finding shelter from the rushing river in the next arch over.
Oh. I fibbed. The car's not really automatic. It was me doing the running-away all the time.
Posted by soubriquet at 4:18 pm 9 comments: