Back a few years, there was a movie called 'Nights in Rodanthe', it starred, according to hollywood, Richard Gere and Diane Lane, but to me the star of the movie was the house itself.  The movie was a bit slow and lacklustre, and with a crummy ending.

Now, the house you see in the movie, is an illusion. Oh yes, it was based on a real house, but a real house heavily modified by the production department, all those blue shutters, the big deck, well, they went on for filming, and promptly came off again. I know this because I happened upon a pic on another blog, of the house standing, bereft, and forlorn, all alone on the sands.
Illusory or not, it's just the sort of house I'd like, all those different levels, high up look-out rooms with a view, deck opening out of the bedroom, external stairs... I'd like this house up on a hill, in a forest....
Or by the sea, but on a nice solid promontory, well above the waves. Quite honestly, the only word I can think of for someone who builds something like this on wooden pilings, in dunes, on a hurricane coast, is 'stupid'. 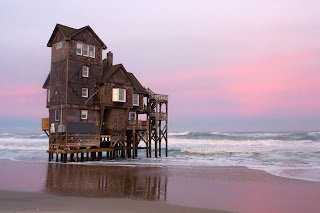 Not quite as in the movie, but I thought it looked similar. 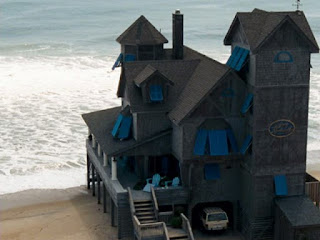 Lots of shutters and the deck improve it, I think. 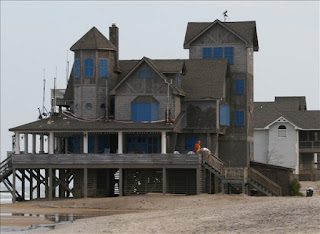 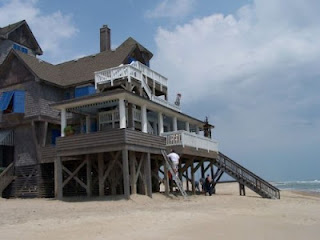 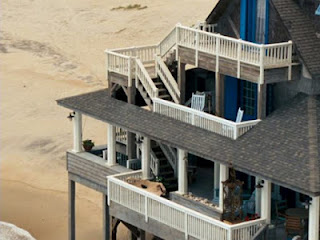 And now, the real thing. 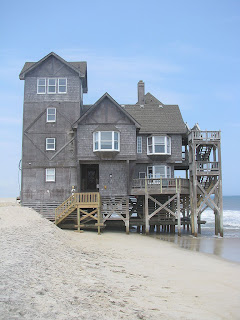 Battered by storm, and condemned. 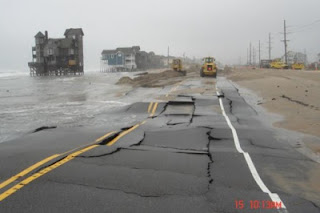 The house, which I though looked rather old and quirky, is certainly quirky, but hardly old. It dates back only as far as 1988.
Back then it did not have its feet in the ocean. Houses here are coming in for vociferous criticism, as some residents of the Outer Banks believe the houses themselves are contributing to erosion of the coast. This one, 'Serendipity', came in for a big share of that criticism, the owners, it was said, had bulldozed dunes in a futile attempt to save it. They put it up for sale, at a pretty steep price, but, surrounded by storm, its sewage tanks destroyed and water and electricity lines severed, it's hardly surprising that the market was not brisk. Local authorities had given it ten days, before it must be either moved, or demolished. However, a couple who were fans of the movie read of its impending doom. They offered a more realistic price, it's said.
And.... rescued it. 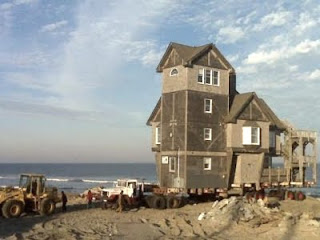 We just don't do this here in Britain, uproot and shift buildings. I've seen it in National Geographic, and in TV documentaries. I'm overawed by the teams in the U.S. who have the skills and patience to jack up a building like this, insert a steel girder raft, and wheels, beneath it, and then haul it with a WWII tank transporter to a new home. Amazing. 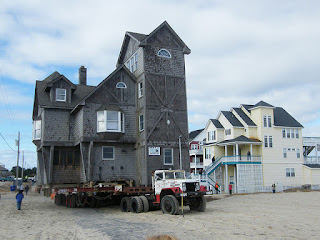 It has been moved to a new home, a little under a mile from its first one, and is being refurbished, and will, if the new owners have their way, end up internally and externally, pretty much as it appears in the movie. The real house's interiors actually look nothing like the movie, whose interior shots were all done in the studio.  But they will, soon.
You'll be able to rent it for your holiday, at an eye-watering price.
A couple of years from  now, though, who'll remember a less than stellar movie called 'Nights in Rodanthe'?

Here's some background from the Island Free Press.  And more.