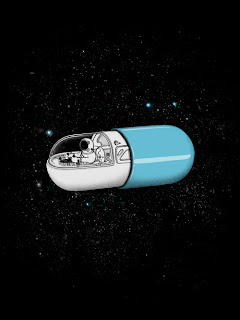 I'm swallowing antibiotics in capsules big enough to travel in. I think I'll fit one with a seat and an intergalactic propulsion system.
Over the last week, my left ear has been gradually  tuning in  to the cosmos,  registering strange popping sounds, clicks buzzes, gurgles, and general white noise. The tuning was really crummy, I never got to hear a full sentence or identifiable sound, but on sunday it started to be painful, not just annoying. On monday I went to work and was extremely wobbly, my balance was definitely odd and touching in front, behind or under my ear really hurt. Oh. And I was working twelve feet up, on a scaffolding tower. Or I was trying to. By 9 a.m., it was obvious that anything requiring balance or concentration or bending down, or turning around, was a bad idea. I decided to do the sensible thing, and call my doctor. Unbelievably, the receptionist said "Can you get here for ten-thirty?", instead of the "Earliest appointment I can give you is next thursday", which I'd been expecting.
So I wobbled into the office, told the boss I'd be gone for a while, and went to see the doc, who peered in my ear and said "You're fine, no sign of..... Ooh?" meanwhile I was gripping the chair with white knuckles and attempting not to squeal.
"Oh" she said. "Nasty. I'll give you some antibiotics, you might  need some over-the-counter pain relief."
What! Might? AAAAAAOOOOOOOW! She prodded my ear, which made me levitate with screwed shut eyes and thought I might... MIGHT need pain relief?
Anyway, I went to the pharmacy with the prescription, picked up a carton of space-capsules, and some ibuprofen, and went back to work. Whimpering (more like a whipped mouse than a man).
By yesterday evening I was seeing purple sparks and wondering if I could mix ibuprofen with vodka and pour it into the ear. Or clove oil. Or burning jet fuel, anything, anything.
I ended up just going to bed and trying not to move my head at all. I did eventually  fall asleep, and dreamed all sorts of horrible dreams. The mad doctor had my head clamped in a vise and was trying to drill into my brain through my ear, in order to implant a controller and turn me into a human robot.

This morning, the pain was subsiding a bit, and strange noises had resumed. The capsules make me nauseous, but it's preferable to the alternative.

This has been a shamelessly self pitying post, and unabashed trolling for sympathy. I know you're thinking "Stand up, man,  don't be a spineless, snivelling wimp!"
But today, that's me. Spineless as a jellyfish.
Posted by soubriquet at 1:20 pm 5 comments: