I Stole This Picture from the Interwebs 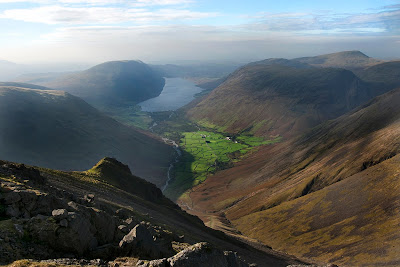 I'd love to pass the pic off as mine, but it's not.  The place? Wasdale, in Britain's Lake District, as seen from Great Gable. If you were to zoom in on the green bump a bit to the left of centre, you'd see a few tiny black specks, people. Down further away in that wonderfully green valley, those filigree dark lines are stone field-walls. The white blob on the right of the green is the Wasdale Head Inn, which, if you've made it to the top of Great Gable from the far side, is probably your destination. The last time I was up there  was quite a few years ago. We were planning a spot of ice-climbing, me having bought my little brother a book on ice-climbing for christmas. So, between xmas and new-year, off we went for the weekend.When we were up on the top, the clouds came in, and the snow. brrrr.
It took quite a while to get down in zero visibility, and to get to the pub.
The pub was vital, because my pal had told his wife he'd call at a certain time, and if an hour passed beyond that time, with no call, she was to call the fell-rescue team (he was a team leader in a different region).
How we cursed him as we scrambled and rolled down a scree-slope in the dark.
The pub was so welcome, the beer too. The landlord, seeing us scraping snow off ourselves, evicted a group of people from the table by the fire, saying we needed it more than they did.
And he was right, because we had tents to pitch, and had to store enough heat for a fifteen-below night.