Seen in the Sky Over Northern Norway, This Morning. ... Subtitle: Oh My God, We've Just Lost Power on the Port Reindeer! MAYDAY! MAYDAY! 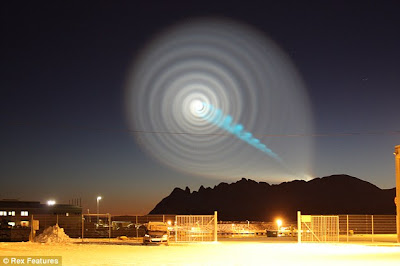 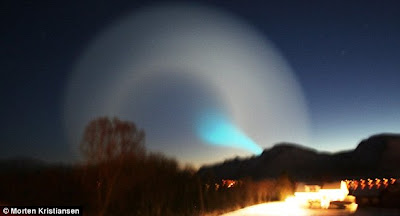 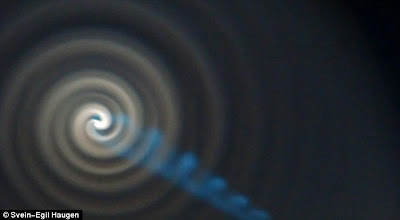 This lasted for, according to many witnesses, over a large area of northern Norway, about two minutes.
So far, nobody has come up with a definitive explanation.
The most persuasive one so far is that we're seeing the traces left by a Russian ballistic missile, spinning out of control, and ejecting a fine mist of fuel vapour as it spins. This vapour is sufficiently far into the upper atmosphere to be illuminated by the sun, long before sunrise occurs at ground-level, just as vapour trails from high flying aircraft are often illuminated in the pre-dawn sky. 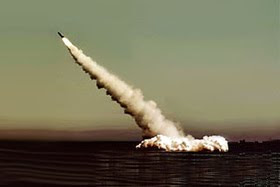 The Russian Navy is exercising in the White Sea, not so very far away, but..... the Russians deny any launches at or around 7:45 a.m. local time.

"Russia’s troubled Bulava submarine-launched ballistic missile will be test-fired on November 24. Of the 11 test launches that have been conducted so far, only five have been successful.

The missile will be launched from the nuclear powered Typhoon-class submarine Dmitry Donskoy, which is the only vessel in service with the Russian Navy capable of testing the new missile, RIA Novosti reports.

The Bulava was last test-fired from the Dmitry Donskoi in the North Sea on July 15, but self-destructed soon after launch due to a defective steering system in its first stage."

The Bulava is a 5,000 mile range intercontinental ballistic missile, with capability for multiple re-entry warheads. Somehow that seems like a return to the bad old days of the cold war. 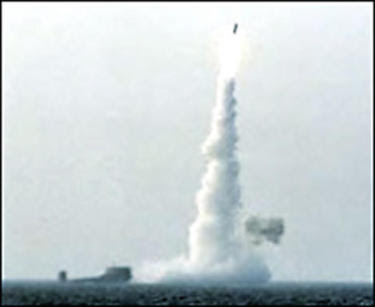 I'm sure things will become clearer in the next few days. But I wish I'd been there to see this strangely beautiful happening.

Update:- Russian Defence Ministry have today confirmed it was a Bulava missile, launched from the submarine Dmitry Donskoi. "It has been established ... that the missile's first two stages worked as normal, but there was a technical malfunction at the next, third, stage of the trajectory," a Defense Ministry spokesman said." 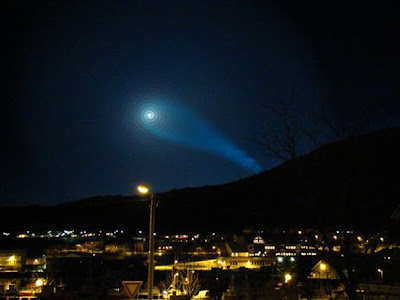 A very expensive light-show. Half of Russia's military budget has been going into these missiles, recently, and 8 out of 12 launches have been failures. In this case, a very visible one. The builder blames the failures on poor quality components coming from the 650 suppliers, and says this would not have happened under the soviet regime. Hm. And under the soviet regime, he might reflect, the chances are that he'd be lucky to get sent to a gulag.