Of the Allure of Clay

A comment on my blog from Gary made me think...
I don't really know Gary at all, I left a comment at his blog, and he visited mine. But in a way, I do know Gary, because I've read his words, and seen his pictures. But more so because we have something in common.


Thanks, Gary. It's time for me to figure out how to get back to making things out of mud.

Here are a few of my pots. These were made from clay out of the field behind the pottery, lovely throwing clay! Chrome-tin pink.. Note that it 'kissed' another pot, but hey, all's well that ends well, I like the little bald patch on the side! Teapots.. once-fired, glazed inside, oxide-banded outside. These were little one-cup teapots. My sister commissioned some as gifts for friends in the U.S., and interest in those was so good I started making tiny teapots as a regular item. Alongside giant ones. Thirty-cup teapots were popular too. Casserole, and salt-pig. the lip on the casserole acts as handles for carrying. I've been using this one on the oven for over thirty years now! 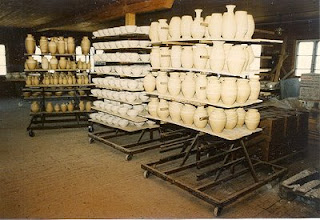 -Gratuitous Nudity, Almost Safe For Work. Umm some NSFW (or not safe for kids) words.


"I was asked in New York City, "Do you like my clothes?"
I'm talking to my tape recorder, walking down the road,
But on Friday night, I'm purified that my feet don't touch the floor
when the rubber meets the road, in between my toes,

Everyday is fucking perfect, its a paradise.
watch my life, like its a movie, have to watch it twice
a boy looks at a girl, and a girl looks like a pony
she gallops all day long, in between my toes
and every night, she's purified, she don't do that dance no more
when the rubber meets the road, in between my toes

I'm skankin, on the dance floor, I'm drunk off that hennesy
i ain't sober, i don't mix with coca cola, or soda
but right now i'm on a roller, i take a look over my shoulder
and i see this sexy thing, i think its time to walk my way over
so i shuffle on my heels, and bounce on my toes
I'm crazy and she knows, still it's all good i suppose
she nailed my face she backed it off
so I got behind her and i let it off
then we got thrown out an' the sun came out
so' i took her to my yard an' i racked it up

the lady starts to sing, but she ain't no disco dancer
she learned to shake her thing, in between my toes


"Fatboy Slim gets a lift from Iggy Pop, David Byrne, Dizzee Rascal, Martha Wainwright and Ashley Beedle on the debut album from his new project, the Brighton Port Authority.

The BPA's debut album, on which Fatboy Slim appears under his given name of Norman Cook, is further presented as having been culled from a series of tapes found in a cardboard box at "Brighton dockside warehouse".

A release date for the collection has yet to be announced, but "Toe Jam" will be out digitally July 7th via Cook's Southern Fried label."

Posted by soubriquet at 4:31 pm No comments:

A Car For Steve Steve, of "Bullet Holes in the Mailbox" has been looking for a car. Soubriquet Enterprises has sourced this low milage model, which benefits from low tire replacement costs, both active and passive anti-theft devices, a unique paint finish, and break-resistant windows.
It can park pretty much anywhere it wants, and is an excellent commuter model, being resistant to everyday abuses.
This car is not a bland sub-compact. This is a car for the assertive driver.