This time it's the sleepy little town of Chappell Hill. It's an old town, in Texas terms. The Red Dirt Girl and I were cruising homeward, from Brenham (previously), toward Houston, on U.S. Highway 290.  I was driving, and beginning to feel a little brain-numb. But then we passed a car-sale place, and I perked up, so we turned around to take a look. Now, sadly, I was not in a position to buy, but, dreaming is free, as, I think, Blondie sang. oh. yes, she did, by the wonder of the interweb, she can sing it right here on my blog.


So, we turned around, and went to look at old cars.  It was the Whiz Motor company of Chappell Hill 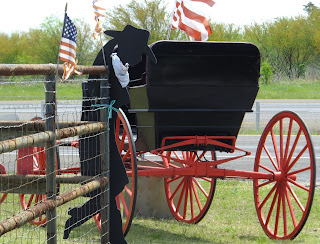 Outside the gate, there's the buggy that people like Henry Ford were competing against at the start of the motor-car era. This one is, I'd guess, a very late model, early 20th century, I think it's what was known as a Surrey, but without a fringe on top.

I'm saying that very much as a non-expert on horse-drawn vehicles, especially American ones, but what you see here is a pretty sophisticated piece of work, lightweight, agile, strong. Low unsprung weight. Look at the red parts, lightweight, slim wheels, very lightly dished. Note the axle camber, which leans them subtly outward. I'd better not get into the subject of chassis geometry. Cambered wheels go back a ling long way. but the really neat thing you see here is the suspension.  Three-point attachment, the rear of the body sits on a frame which is mounted centrally to the topmost of three multileaved semi-elliptical springs. Roads were rough, but this arrangement would allow a lot of movement up and down of either or both rear wheels, without transmitting most of that to the passengers above. 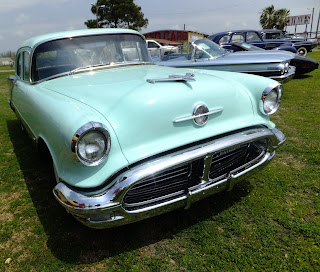 This would be altogether a smoother, lusher, ride. 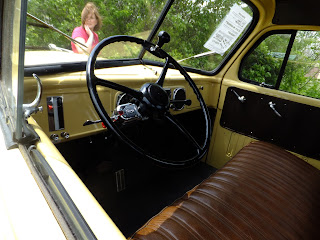 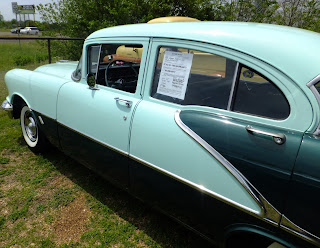 Via Nag on the Lake 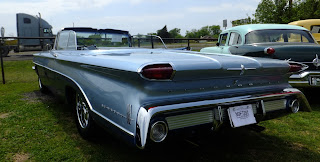 Or a car for the jet-age. 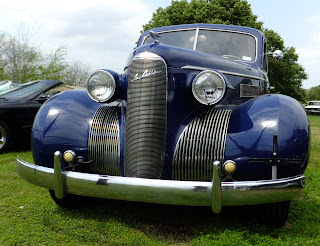 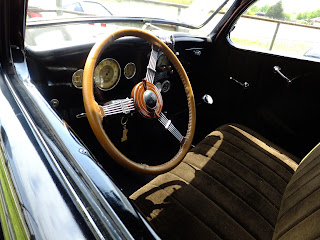 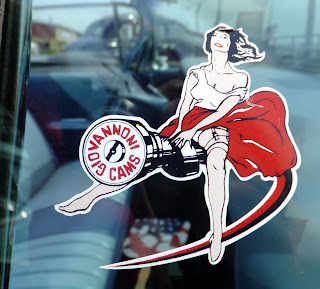 I never knew that a cam-shaft was such an exciting thing....


Editor's note: so it occurred to me to look up Giovannoni Cams, and I discovered Ray Giovannoni in  1959, one of the best when it came to getting more power out of an engine, Giovannoni Cams started out in Washington DC, but later moved his business to Daytona, Florida, famous for its motor races and record breaking speed-run attempts on the famous Daytona beach. 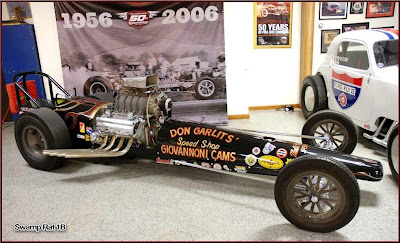 Don Garlits, legendary pioneer dragracer ran with Giovannoni Cams, for one season, in 1959, and broke world records: In his own words "When I got the call from Giovannoni and he said he’d give me $10,000 to change cams -- now, in 1959, $10,000 was a lot of money. You could buy two homes. It’d be like a quarter of a million dollars today. I called up Ed and told him what was going on, and he told me he couldn’t pay me $10,000 and that I should take Giovannoni’s money. Now the good thing about this is that the California cam grinders had just been sitting on their keisters, and Giovannoni did something to his cam, and the car ran real good. We came out to Bakersfield and ran 185.56 for a new world record and went to Fremont and went 187.10 for another world record, and the California cam grinders realized that this idiot from Florida must know something, so they all got on their camshaft programs and put together some pretty good camshafts, Then Giovannoni decided he didn’t like the business anymore, went back to Washington and opened some restaurants, and that was the last anyone ever heard of him."

That wasn't the last anybody heard of him. Whatever the reason might be that Giovannoni turned his back on the world of fast engine tuning, he took himself to further successes, founding a restaurant called "The Fish Market" in Alexandria, Maryland.

Isn't the internet amazing, I even found the guy who drew the sketch that became the logo...... 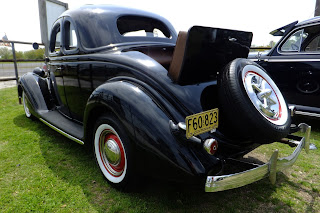 Car excitement over.... Though I can see how carrying ones passengers in the dicky-seat outside might be attractive to parents of squabbling kids... 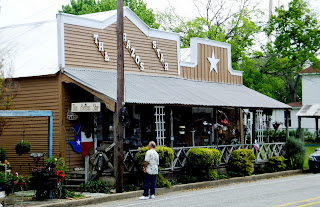 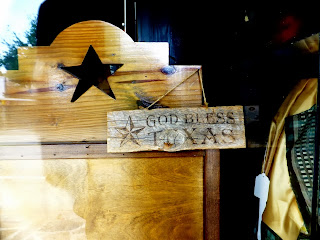 The little town of Chappell Hill has some nice old buildings, but it was not exactly buzzing with activity. 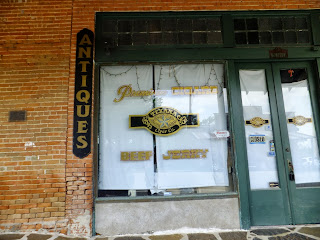 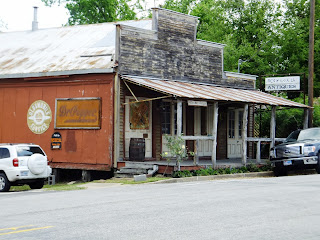 Quite a few buildings were apparently disused. 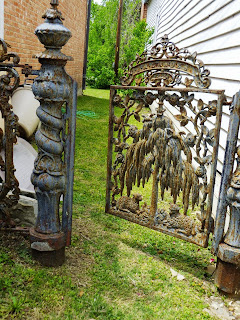 Something a little sinister, this gate should lead to the scary haunted mansion. 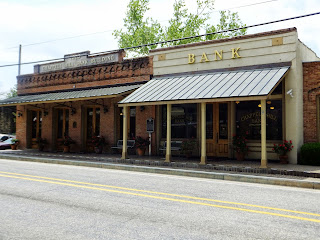 The bank actually has a notice on the door encouraging you to bring your gun along in.
I'm assuming that they're confident that they're better armed and have more firepower than any bad guys who might take up the offer. 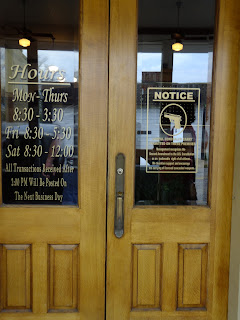 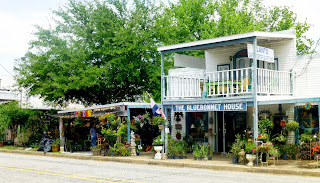 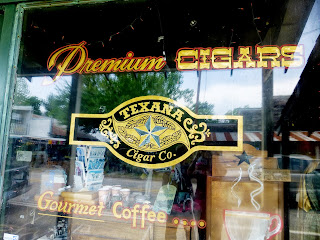 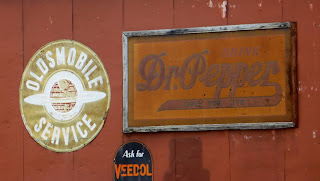 Get some very old oil for your very old car? 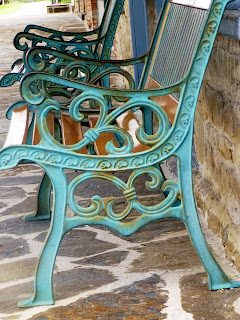 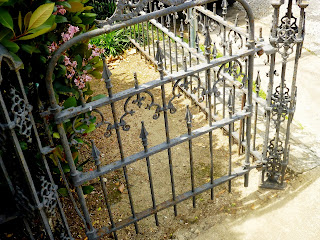 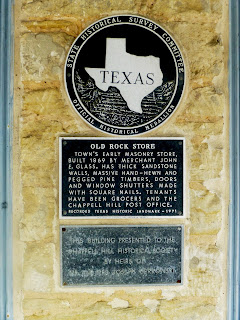 Historic building,  I have trouble not laughing at the reverence shown toward nondescript structures that were built about last thursday, I confess, but to be fair, this was the edge of the known world, around then. 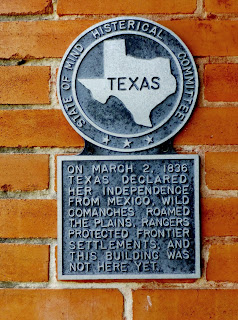 This plaque is more my flavour.