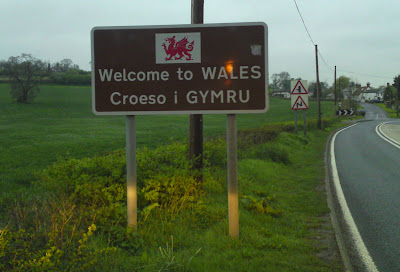 Croeso? with this weather? 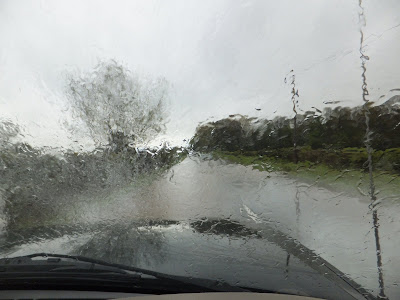 On friday, I left work a little early, and pointed my car south and west, toward Wales. Why? because my mother,  who died a little over a year ago, was a little Welsh dragon, born and bred in South Wales. No matter that she'd actually lived more of her life in Yorkshire, she was welsh through and through, and the coast of south Wales was ever in her heart. She'd decided, after long and careful thinking, a) that she wanted to be cremated, because worms would get her otherwise, shudder.... Burial at sea was out too, because of crabs and starfish and creepy things..., but cremation was fitting, she thought, for a small dragon. 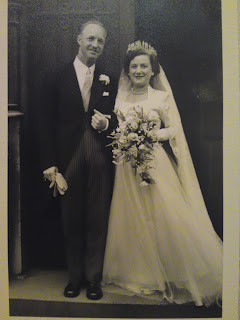 She decided her ashes were to be halved, and half of her was to be forever with her husband of sixty years, my dad, and the other half on the cliffs of the Gower, the coast she never really left. 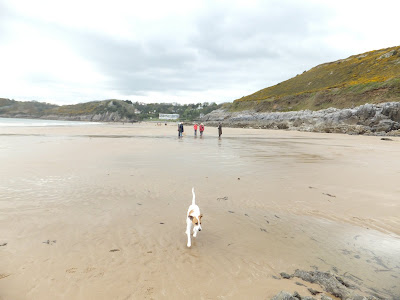 
Hence the four and a half hour drive, on a filthy rainy friday night. It's been delayed and postponed, until at last, most of her family could get together to say goodbye... again.
The grieving is over, that was a year ago. We got together to walk on the beach, exchange stories, and laugh. 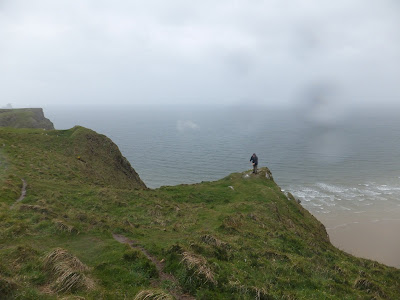 We could all, I think, hear her laughing as we set out into the gale, -freezing, torrential, rain. The plan had been to distribute the ashes on Worm's Head, a distinctive promontory attached to the mainland by a low-tide-passable causeway.
I started to strew the ashes, after we'd ascertained with a makeshift windsock, the likely spread, and safe areas in which to stand....
In moments, my coat was plastered with ash.
Amidst the laughter, my brother took over, and headed for a little outcrop, and attempted to hurl the rest into the gale...  He also got liberally coated.
After which we found a handy waterfall to wash our hands. 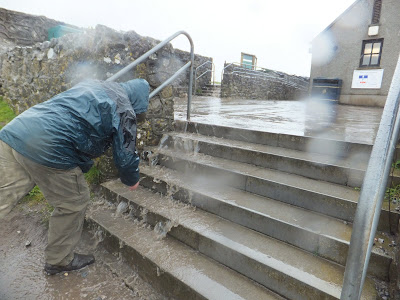 Luckily, I was able to borrow a dry, un-ashed coat before we went into the hotel, where a meal was booked. 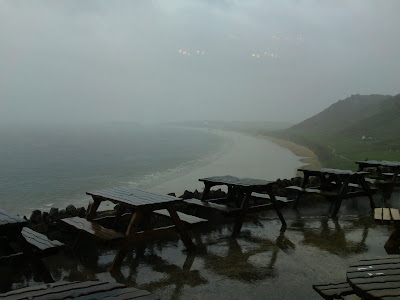 The hotel overlooks Rhossili Bay, where we holidayed as children, with our cousins.
It doesn't always look so grim, see here. 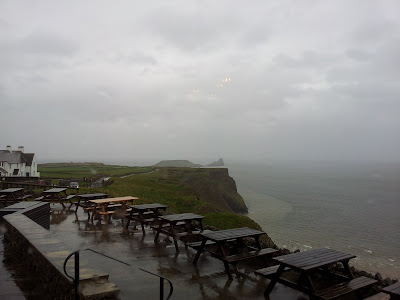 
It was good to meet up with our relatives, though we don't see each other very often, it's like coming home, we're never strangers when we meet. I learned a few stories, told a few, ate well, and then, of course, had to leave. Getting home was not easy. The storm had left an estimated 10,000 homes in south wales without electricity, my route home had to be changed because of fallen trees, power lines, accidents, flooding, flood debris... It took six and a half hours, and at one point my engine coughed because it was swallowing water... Not good with a high-compression diesel, an inch deeper and it might have meant a wrecked engine. Luckily, when the cough occurred we were climbing out of the deepest bit.

Agh!. Anyway, about three and a half hours later, I was home. Hot shower. Bed. Wonderful. She'd have worried about me driving in that horrible weather, my mum, my friend.

The Red Dirt Girl, my 'very special friend' wrote a piece about her. 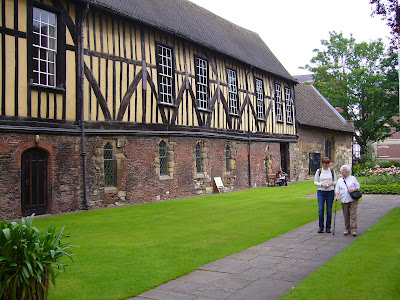 Here they are together, on a happy day out together in York.