I'll bet you all think I'm too lazy to write a proper blogpost?
Well, you're wrong, so wrong wrong wrong. Truth is I write dozens, hundreds, dozdreds even, that never get posted. "But how can that be?" I hear you ask, wonderingly.
Well, it's just that I write them in my head in the shower, in the kitchen, whilst driving to work, whilst at work etc. And of course, in bed, whilst not sleeping.
What happens to them?
Bzzzzzt! gone.
They exist for a short while, then get overwritten by my memory, or just fade away. Either way, when I do get to the keyboard I stare at it blankly and can't remember the extremely clever things I wrote in my head a few hours before. Anyway, the Red Dirt Girl has chastised me for not writing, whilst leaving blogpost sized comments elsewhere. That's part of it... I'm better when triggered by somebody else's topic. That's of no importance today, because we are going to reveal the antipodean heresy. 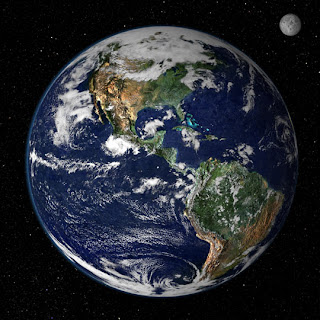 It's all about where is the opposite side of the planet. Any kid in England, knows, (KNOWS!) that if you dig a hole straight down and keep digging long enough, you'll find kangaroos, because directly below our feet, through the centre of the earth, is Australia. Any American kid will tell you that if you dig deep enough, you'll come out in China.
And these beliefs follow us toward  adulthood. I, of course, being inquisitive, questioned my geography teacher, who told me it would be New Zealand.


Bartolomeus Anglicus, "Bartholomew of England", as translated by John of Trevisa was an early conspirator in the whole antipodean thing. Back in the thirteenth century, the luxury of google earth was not available to learned scholars, possibly because there was no electricity to run their laptops.

Also, there was not really a great set of world maps, or even globes, being that:

So, it's no wonder that Bart gets it wrong when he thinks that on the opposite side of the globe to his feet are the Ethiopian's. Bartolomeus was english, though he wrote his book at Magdeburg, in Saxony.

But no matter. Not even if you take on board the concept that Ethiopia was not, to a mediaeval person, the country it now is, in north east africa, oh no. Ethiopia was the whole dark mysterious continent we now call Africa.

Thing is, if you dig from Magdeburg, you don't come out anywhere near africa.

But that's the point. If you dig from America, you won't come out anywhere near China.
Nor does will any English kid ever meet kangaroos tumbling into the tunnel.
Nor Kiwis.

The truth is, both kids, if kids could really dig for 7,296 miles through the earth, through rock, magma, molten iron, all of that, both would drown instantly as their shovels pierced the seabed above their heads.
Have you ever thought of the logistics? How your little sister would have to haul each bucket of earth on the world's longest rope, and tip the bucket out before lowering it for the next shovelful?

So, how can you know where are your antipodes?
I puzzled about it whilst brushing my teeth, and dental floss gave me the answer. If you have enough dental floss, and know the earth's circumference....
Well, if you have a globe, and enough dental floss to circle it at the equator, then halve the resultant piece, then, if you stretch that floss tight, holding one end at a spot equivalent to your current location, the other end is at exactly the opposite spot on the sphere. To do this in full scale you'll need half of 24,901 miles, or 12,450.5 miles.
(But you might need to adjust for mountains...) 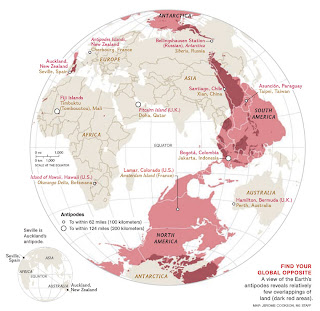 It gets more difficult.. The earth is not a perfect sphere. It's more of an oblate spheroid, but not even precisely one of those. In fact, there is only one word that gets it perfectly right, it's a geoid.
Nobody can argue with that because the definition of geoid is 'earth-shaped'.
I like that. Perfect... "What shape is the earth?"  "It's earth-shaped!".


Oh. And if you did have a hole all the way through the planet, clear and unobstructed, and filled with only a vacuum,  (no friction) and you stepping into into it, in your space-suit with air supply and ipod, how long do you think it would take you to free-fall to terminal velocity, and rise, decelerating until you arrive at your antipodal point?

Answer in the comments.
(in a vacuum, you'd rise to the opposite of your start position, then return, if there was no friction, you'd do this forever, a perfect pendulum... What do we remember about pendulums? (pendula) Ah. Equal time per arc.
(The earth's spin, and all forces other than the earth's gravity, are imagined to have no effect on your straight-line path.)

no, I don't expect you to calculate it, I certainly couldn't and I'm not expecting that any of my readers will be physicists and rocket-scientists.
But I'm told that there is a calculated result and it's nowhere near what I'd have guessed.


Is that enough? my poor typing finger hurts.