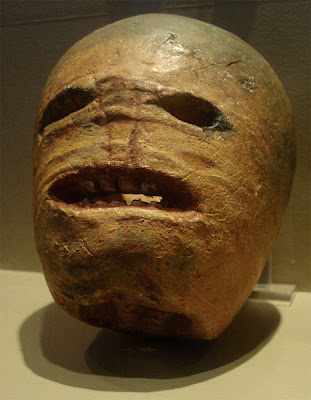 Halloween, the eve of All Hallows.

When I was a kid, we carved lanterns. Not so often from pumpkins, they're an american import. Traditionally, they'd be carved in england from root crops, like turnips. And by strange coincidence, as country-living kids, we'd get turnips. or swedes. And we'd stick a candle inside, and tie a string handle, and go out, fearfully, into the dark. We'd have been primed with stories of witches flying on their broomsticks, with their black-cat familiars, we knew this was the night when the souls of the damned roamed abroad.

You could blacken your face with soot, and go sing at neighbour's doors. For on this night it was unwise to turn a stranger away without a gift to appease what might be an angry spirit. Country people used to make "soul-cake", and kids would get gifts of cake, and a drink.

Tomorrow would be All Saints Day, All Hallows, but this day, All Hallows Eve, was also known as all souls. The restless souls, freed from the dark enclosure of the grave, would roam, seeking home and hearth.

The origin of all this? the pagan festival of Samhain.
The end of warm days and light, the onset of the dark, and the cold claws of winter.
Our ancestors built bonfires this night, sought to appease the spirits, pray for survival through the winter. Burnt offerings. And perhaps the forgiveness of the spirits of slaughtered adversaries. That turnip lantern, that grinning pumpkin, is a nod to the days when the lanterns were skulls.
Hallow e'en lanters were not always friendly cheerful toys, they were once somewhat more sinister.

In America, (originating in central america, not the U.S.), was the pumpkin. Easier to carve, a friendly orange colour, it became the skull of choice, and here in Britain, it's also taken over.
As has commercialisation. We carved our own, and had dripping wax and stubby candles. Now you can get a nice clean plastic pumpkin, with battery operated lighting, and a push-button for a sound-chip to make it cackle or moan.
Our kids get ready-to-wear costumes. All the characters of horror movies from the Mummy to Dracula will be out and about. They're not staring fearfully into the shadows beyond their lantern's light, as we were, no, they're toting their loot-buckets, and effectively, begging, door-to door.
I loathe trick-or-treat. It's a relatively recent import, heavily promoted by retailers.
Kids know nothing of Samhain. They don't think of how pervasive the dark used to be, how can they? Their world has streetlights everywhere.
Nor of the real fears our ancestors had of the spirit world.