Throw it Back, Quick, We're Already Over Quota! 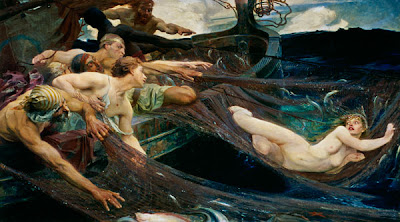 Having posted this, yesterday, I'm looking at the picture and thinking a little more what a disturbing image it is. I've always liked sea pictures, and been fascinated by the way in which painters portray water, but am also fascinated by the stories told in paintings.
Semiotics again, the undercurrents, the unstated, the stories not voiced.
There's no way we now, in our time can read this painting as the viewer of the painter's time did.

The painting is "The Sea Maiden" by James Herbert Draper.

'A song of drag-nets hauled across thwart seas,
And plucked up with rent sides, and caught therein
A strange-haired woman with sad singing lips'

There was,  at the time, something of a fascination with mermaids and sirens, amongst painters, and Draper painted a number of paintings of mermaids, sirens, water-nymphs.
We're in the late Victorian era, 1894, when this painting was exhibited at the Royal Academy.
In the era, whilst ladies were buttoned and covered, chin to toe, the market for classical or fantasy nudes was huge. Households where man and wife possibly never saw each other naked,  proudly displayed pictures like this, and bronze nudes, which often became strangely shiny where hands caressed.

The girl in the picture is a strangely amalgamated young lady, her body is that of  a Miss Bowry, but the face is that of Ethel Warwick. I can't be sure, but I wonder if that's the Ethel Warwick whose portrait is in the National Portrait Gallery in London, she who became an acclaimed actress, and a feted beauty.

The men in the boat? Luigi De Luca, Domenico Mancini, Angelo Colarossi and others. They were italians, from Rome, professional artist's models, and this group of ruffians appear in the works of many artists of the era

The painting, I would describe as disturbing, though I joked about it. We see the hunters and the hunted, our mermaid is fearful of those reaching hands, the men rapacious and lustful, the next few  minutes bode ill for all.
I think it's pretty clear they're not about to wrap her in a warm blanket and give her a cup of hot cocoa.
The cost to all will be high.
A mermaid is immortal, but has no soul, until she couples with a human male. Yet her embrace is fatal to men, her kiss contains poison. Men are entranced by her, and in that trance lies their doom.  So she, in the near future, will be in possession of a fishing boat, the men, one by one, will meet their fate and slip, senseless, beneath the waves.
How, I wonder will it play out? She can not return to the sea, for she will be pregnant, and must have her child upon the land, can she sail the boat? Speak the language of humans? Because she must come ashore, find a home, be a human  woman.
It may be, in the future, posing perhaps as a shipwreck victim cast ashore, speaking no english, she'll meet someone, start a new life, no longer toxic to her lover, she'll raise children, but some stormy night, she'll feel the pull of the tides, a day will come when she walks into the breakers, and swims again, back, far away, back to her sisters. 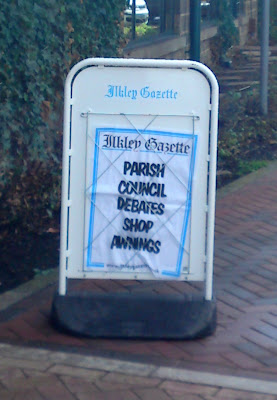 In Ilkley this probably classes as excitement. There's probably an awning in Brook St. with stripes that are a quarter inch too wide....
Posted by soubriquet at 6:54 pm No comments: