The Scientific Editor of this blog was delighted today to hear on the BBC news that scientists at the Large Hadron Collider, near Geneva, have found "tantalising hints"of the Higgs Boson. They haven't actually seen one yet, but as I said in the title, it's elusive. It probably only comes out when it's pretty sure nobody'll be observing it.
So what have they found?

Soubriquet Labs once had a similar problem, something was stealing food, chewing through wrappers, desecrating cheese.
How did I confirm it? Droppings.
I can confidently predict that the Cern scientist have found Higgs Boson poo in the Large Hadron Collider. 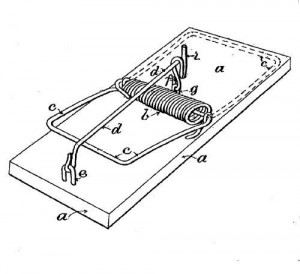