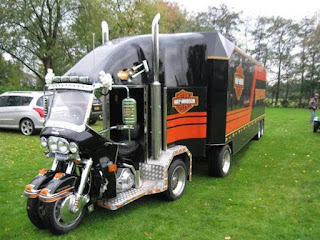 A slight explanation, found via a reverse image-search:  A comment by 'Michael'-

"This was initially built as "The Nine Wheel Harley Rig". It was built in the late 80′s by Kenneth Kilpatrick of Huntsville Alabama. I see from this photo It has since been modified to incorporate a second front wheel making it now ” The Ten Wheel Harley Rig “. The tractor is a modified Harley Davidson FLT. The interior of the trailer is nicely finished. Kenneth did receive license from HD to utilize their paint scheme and logo. I am told, at Harley Davidson’s expense, Kenneth has been able to show his rig in several countries around the world "

This thing beats me completely. It's a masterpiece of semiotic confusion, I admire, absolutely, the craftsmanship, the effort, the vision, that the maker put into it. But my poor brain bashes against the 'why?', like a moth crashing repeatedly against a lighted window.

It's like a Thai tuk-tuk on steroids.
Or a toy truck on pink sparkles.
Or the sort of inexplicable artifact that haunts my more problematic dreams. Hold on... is this real? Am I about to wake? 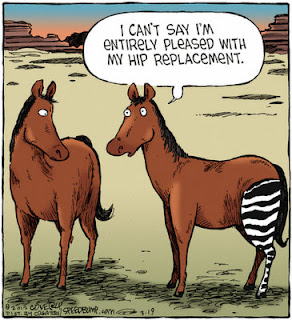