Olympic Cheating: Even the Horses are in on it! 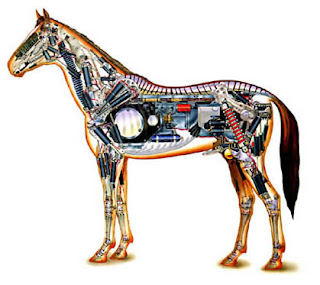 "After high-profile doping offenses by Irish riders at both the 2004 and ’08 Olympic Games, Horse Sport Ireland officials embarked on a massive campaign to eliminate such infractions from Irish sport. In 2004, Irish rider Cian O’Connor won individual show jumping gold but had the medal revoked when his horse Waterford Crystal tested positive for prohibited substances. There was a scandal when the horse’s B sample was stolen before it could be tested, but in June 2005, the FEI stripped O’Connor of his medal and disqualified the Irish team, which had placed seventh, from the ’04 Olympic Games."
via
You couldn't make this stuff up.
Stolen horse-pee!
About as unlikely as cup-peeing fairies 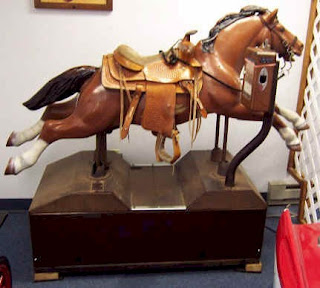 My feelings about cheating in sport are pretty rigid.
Get caught just once and that should be the end of your career.
Either that, or as one wag suggested, have a third, cheat's Olympics:
And in number three, well, you're free to sniff coke, inject rocket-fuel, transfuse kangaroo-blood, wear motorised skates, and nobble the competition. Whatever you like, to gain an unfair advantage.

Like strewing chocolates in front of half-starved gymnasts, for instance.

The Everything Goes Olympics would no doubt have a fair number of competitors dying from the overindulgence in  bath-salts, or whatever, but we could have a special extra section for morticians, and taxidermists, to collect those whose bodies couldn't take the increased stresses.

Extra
It seems Oscar Pistorius will be running in the Olympics, not the Paralympics, on his carbon-fibre prosthetic blades. I'm overawed at what he's done, to be a world class athlete, but I don't think this should be happening. Different studies disagree as to whether his blades are an enhancement or a handicap. However you look at them, they're a significant disparity.

Yes, have a race with blades versus feet, but recognise you're not playing like against like.
Posted by soubriquet at 3:28 pm 7 comments: