Pots For the Kitchen From the Shed! 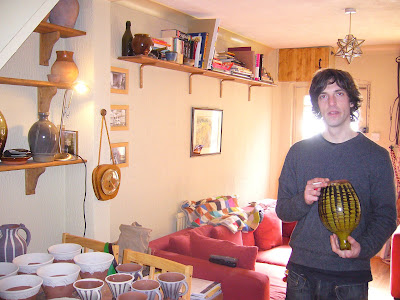 A couple of weeks ago, I had to be in Stratford on Avon for a meeting, and it occurred to me to contact potter and blogger Matt Grimmit, who lives in Evesham, not too many miles further on.
As some readers may recall, I was once a potter, made my living that way for a lot of years in three different countries, and to my knowledge, pots made by me are in at least twenty-three countries.
Somehow, I had lost my way, and became disillusioned, -I suppose it was the growing realisation that there would always be people who balked at paying a fair price for a hand-made piece, yet would pay significant money for mass-produced stuff, bashed out by a machine, by the thousand.

But in recent times, I've been more and more drawn back to a craft I love, to the act of creating things out of clay that will last for centuries. And I miss the people too. Potters are of many differing sorts, they make all manners of wares, some call themselves ceramicists, and ceramic artists, I'm not so concerned with those, but more with the artisans, the true potters who feel themselves to be part of a community.
I love to see ancient pots, and see in them the indents left by a maker's hands, and I know, I can see the moves he made, the grips, the finger positions, I know that that roman and I would, in the absence of words, have a common language.

Matt Grimmitt is one such potter. Although his great-great grandfather was a country potter, who worked at Winchcombe pottery, and taught a great deal to Micheal Cardew, Matt was no potter, he was at one time, a pro-skateboarder, then worked for a food distribution company.
Three or so years ago, he took a pottery course, and was hooked on clay. It is hard to believe that he started so recently.

I'd seen Matt's blog, "Pots for the Kitchen From the Shed", and liked what I saw there. So I'd emailed him, had his reply, and thought, if I could go on to Evesham, we could meet, and I could buy a pot from him. So it was, I thought, I'll turn up late morning, see some pots, go for a pub lunch and a pint, then set off on the road north again. 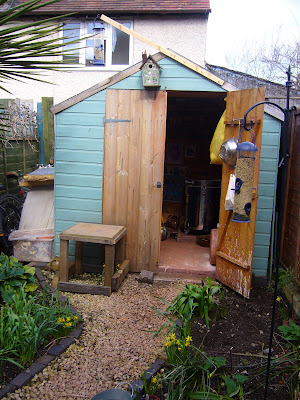 The Shed
I arrived about eleven to a smiling welcome, and a pot of tea, out to the back to visit the pottery... which proves you can work in a small space and get results. What a treat, what a pleasure to see Matt's collection of pots, works by friends, bric-a-brac store finds, ancient shards from a welsh stream, and to hear his enthusiasm for the craft. Matt's work is both uniquely his own, and also deeply grounded in the olde-english slipware traditions, you can see in his shapes, decorations, the curve of a handle, the detail of a rim, echoes of mediaeval shapes, and when he talks about them, it is clear he is amassing a deep resource of knowledge, from many sources, which give him a core set of beliefs, a knowledge of his place in this art, he is constantly learning and experimenting, and his pots show a spirit and liveliness that many much longer established potters would struggle to attain. 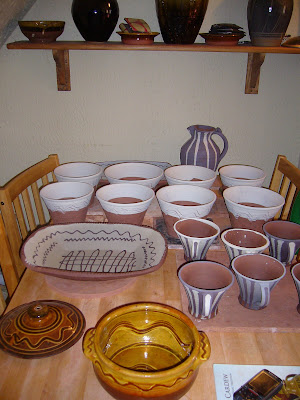 Matt's partner, Tig, shares his enthusiasm, which is a good thing, because their home is a treasure chest of pottery, (and a workshop too, the living-room is used as workspace too). Their crafts sit side by side, in harmony, Tig grows and sells plants, and also makes delicious smelling soaps, which I have two goody bags of, packaged in small hessian sacks, they smell and look so good it seems like sacrilege to actually wash with them. 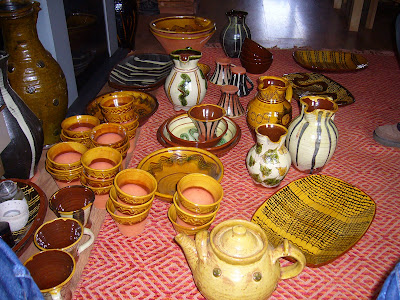 Websites: Matt "Pots for the Kitchen From the Shed"
Tig "Future Primitive" blog, and her very impressive and beautifully displayed Online Shop.

We talked and talked, more tea, Tig came home and joined us, we had lunch off slipware plates, more tea... (great stuff, tea, the fuel of the british!)... We talked of pots and potters, and places where evidence of past makers surfaces in ploughed fields, of roman tiles, and villas... 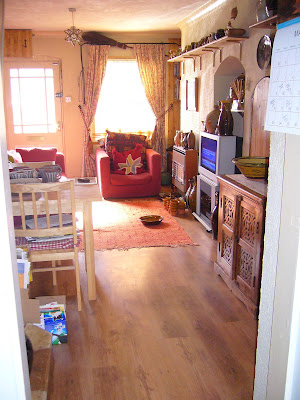 Amongst all the pots in the room I spotted a small pink pig! sadly, I failed to photograph it, but using the skills I have copied from Antiques Roadshow, I was able to identify it as a genuine Gary Rith pig!
Yes, a pottery pig made by the great Gary Rith, potter, blogger, jokester, of Ithaca, N.Y., another guy I'd love to visit.
Gary's blog never fails to make me smile, he is just so full of enthusiasm and good humour... um humor, I mean. I like the fact that Gary is deeply unpretentious, and a great antidote to the over-serious, self- reverent "ceramicists". His pots too are truly his own, speaking of skill and enjoyment, but most of all, a sense of fun. His work is populated by pink pigs, zebras, beagles.....

When we decided to go to a pub, that was when I discovered I'd left my lights on for the last few hours. Luckily, I carry a set of jump-leads... and the Land Rover carries a second battery, to power the winch... (which my feet are resting on as I type, I keep meaning to strip it down and fix it back on the front end).
I'd expected a brief visit, yet it was nine hours after I arrived that I set off northwards again, with my purchases, and also some gifts, much appreciated.

It's the first time (Apart from my beloved) that I'd met anyone i've encountered in the artificial world of the internet. And I'm so glad I did. I felt as though I'd known them for ages, and was amongst friends, which seems strange, based on this medium of the blogworld, yet for whatever reason, it's true.

Thank you again, Matt and Tig, for a very enjoyable day.
Posted by soubriquet at 6:36 pm 4 comments: 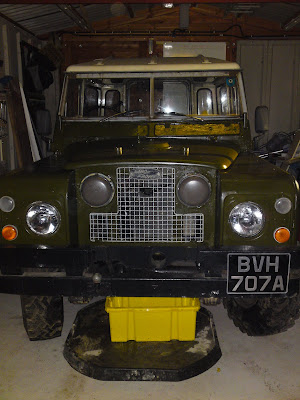 As we all know, this is the mantra of the infernal combustion engine. Suck, Squeeze, Bang, Blow, and all will be well.
Project Shed has been nearing completion and was, last friday, so imminently there, that I booked it in for an M.O.T. test. (ummm. for those not from the U.K., MOT stands for the Ministry of Transport... All britain's cars of over three years in age need this test every year in order to be allowed on the roads.)
The green thing has been off the road for a few years, and over the last two or so, I've been working on a major rebuild, assisted by my very good friend Ken. These pics were taken in his garage where the most recent works were the replacing of all the brake components, pipework, cylinders, brake shoes, fluid, etc. So all of a sudden, we were ready. A quick coat of new military green paint, and some fresh fuel, a brief test up and down the road, and then the test. Soon be road-legal again.
Fzzzzzt!
"Where's that water coming from?", asks Ken.. Just as we're about to set off. True enough, theres a splashy trail out to the road.
We roll it back in, and I crawl under with a torch.. Rusty stains down the side of the engine block tell a story, and not a good one.

When engine blocks are being cast, there's a sand core inside, to create a space around the cylinders, as the casting cools the sand core is broken up and flushed out of holes in the side of the block. The holes are machined smooth and round, and cup-shaped steel plugs are pressed into place. In the U.S. these are sometimes (erroneously) referred to as "frost plugs", because if the water in the block freezes, they are often pushed out by a column of ice, leading people to think that this is their purpose, to act as a pressure relief for freezing. In fact, ice expands in such a manner that despite those plugs moving, the ice can still burst the cast iron block. This is all a digression, by the way.
Core plugs. That's what they are. They're made of mild steel, and corrode more readily than cast iron. 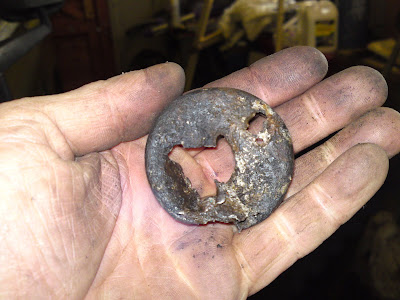 The ones in this engine were probably the originals, and in that case, have been doing their job since 1962. Ove the last couple of years the engine has been filled and drained several times, and often without the corrosio-inhibiting advantage of anti-freeze additives. At the first sign of rust spotting on those plugs, someone, during the rebuild.... oh, okay then, it was me... thought to fill them with a tough epoxy filler, claimed to be equal to the job of repairing cracked engines.
J.B. Weld, it's called. It is NOT equal to the job of plugging core plugs.
Where are the culprits?
Good question. A camera phone could see them, but no direct sight was possible. No chance to fix them without taking off the exhaust, the inlet and exhaust manifolds, carburettor, starter motor, alternator.... 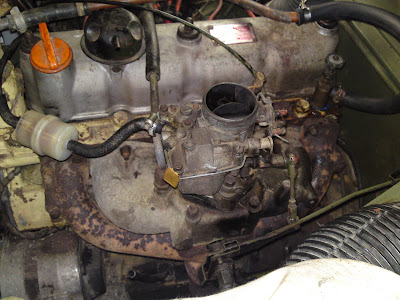 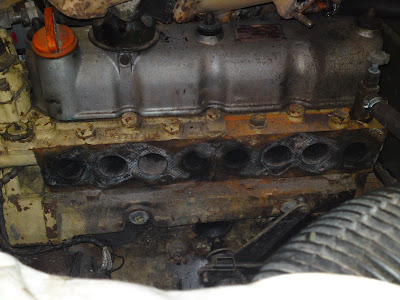 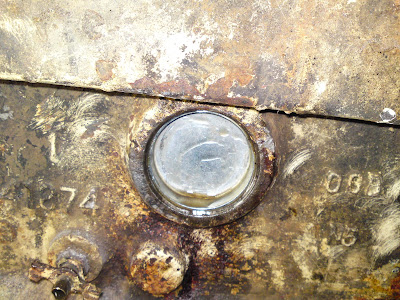 It took almost a day, including buying spares, then reassembling and test-running.
The beast is being entered in the national off road trials, I'm determined. The last one it was in was in 1995, and my little brother broke the gearbox, getting to a point up the side of a quarry somewhat further than I had reached, and being one of the few that day to clear that section. Most of the others that reached that point were V8 powered, not a clattery two and a quarter litre four cylinder engine. 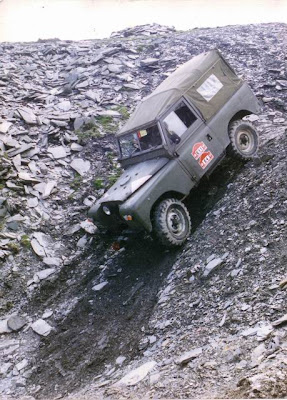 The box ran with the broken first gear for several more years, but there's a fresh set of cogs in there now.

All being well, one evening this week, we'll be celebrating the end of the rebuild.
Posted by soubriquet at 4:42 pm 2 comments: