Just a few words on ash. Here in Britain all aviation is shut down, as it has been since very early on thursday morning. Why? because of a cloud of volcanic ash,  hurled into the sky by the icelandic volcano known as Eyjafjallajökull.(Ash is actually a rather incorrect name for it. Ash, I think of as the residue left after combustion. This is not residue after combustion, ejecta might be more correct, mineral matter, spicules of basaltic glass. One airport "spokesman" was rambling on about ash and soot. He seemed to think the air was full of soot too. What a muppet. He will be earning vastly more than me of course, so I'll try not to feel too critical of his lack of understanding about the events which have closed down his industry. Maybe he's really good at powerpoint presentations.)
Journalists around the world are tripping over their tongues trying to say Eyjafjallajökull. There are a myriad different versions out there. Once upon a time, the BBC had a pronunciation department whose job was to make sure newsreaders didn't make fools of themselves. Would it be so very difficult for the TV stations to call the Icelandic embassy, or Icelandair, or anywhere they can find an icelandic person, to ask for the correct pronunciation?

Eyja means "islands", (Ay-ya) fjalla (fya-tla( means mountain, jökull (yer-kutt) means glacier, or icecap,  "Ay-ya fya-tla-yerkutt", there's a slight "l" sound on the end, not a full-fledged "l",  not quite "tl", just half an "l" sounded. That's as near as I can get. From memory.
I'd imagine it got its name when early norsemen saw it as one of the first sights of land to the west of Norway, they thought it islands, then, closer, saw it was a mountain on a bigger island, covered in ice.
The volcano is in the mountain, beneath the glacier, and so the active crater first caused a huge icemelt which flooded rivers and washed out roads. 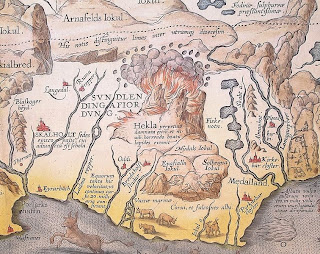 Another Icelandic Volcano, Hekla,
as described by Abraham Ortelius in 1585
The latin text "Hekla perpetuis/damnata estib. et ni:/uib. horrendo boatu/lapides evomit" means "The Hekla, perpetually condemned to storms and snow, vomits stones under terrible noise."
The blast of the eruption coincided with  a period of calm weather, low winds, so up there, from 10,000 to sixty thousand feet in a broad swathe across the north atlantic, scandinavia, and western europe the air is filled with highly abrasive dust. It melts onto, and clogs jet engines. It stops them. Which is not a thing you want to be present for.
It will abrade the surface off glass windscreens, leaving a plane flying blind, it will block instruments. So aviation has shut down, totally.
It's strange. Looking up, we see clear blue sky, not a trace of any visible cloud. Yet its up there. My car is covered in a fine film of dust. No more than if I'd driven a half mile of dusty farm road.
Yet there are no lines in the sky, no vapour trails. No faint, far-off rumble of jet engines throttling back as they line up on the airport.
No police helicopter clattering about in the night sky. No yellow air-ambulance rushing busily toward the helipad a couple of miles to the west.
No little planes, no weekend pilots, no military heavy-lifts.. It's only when they're not there that you notice how much a part of the daily scene are machines flying in the sky.


Just close by to this eruption is the sleeping giant, Katla.
If Katla erupts, this one will look like a pimple in comparison. There's also a lot more ice depth over it, so the mudflows and flooding will be far more aggressive.
I've flown over volcanoes a couple of times, as I think I posted about before, close enough for the skin of the plane to become too hot to touch inside the cockpit. And close enough for the noise of things hitting the plane to be louder than the engines. Both were propellor-driven, not jets, but I'd hate to think of how rapidly that stuff was clogging the intakes.
The wings, in which the fuel tanks live, were even hotter.
I loved living in Iceland, even though it was often cold, wet, and windy, it's a beautiful country,  sitting over the junctures of two tectonic plates, it's the place where the Mid-Atlantic ridge is exposed above the surface of the ocean, where you can see geology in action, land forms that can change in a matter of days- minutes, even.
Where you can see new-born rock, hold it in your hand, the magma of our planet's interior.

And right now, some of that's sifting down out of the sky, all over northern europe.

A KLM  Boeing 747 flew into ash over Alaska in 1987, all four engines stopped. They were successfully restarted at 14000ft, and the aircraft landed safely, but the less than six month old plane suffered $80 million in damage, including all the engines having to be replaced.
Posted by soubriquet at 8:05 am 12 comments: