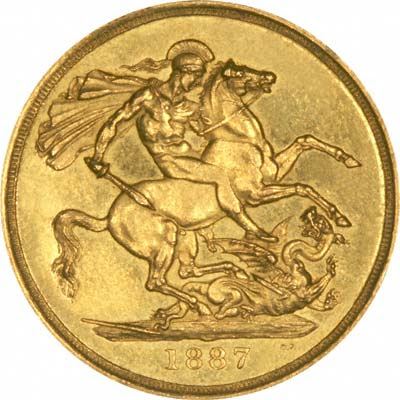 A Gold Sovereign, Queen Victoria on the face , St George on the obverse.
(The image reminds me of a story...*) 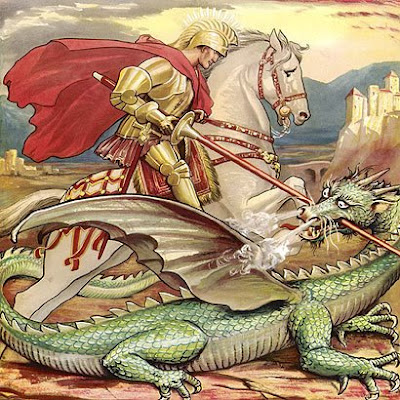 St George is the patron saint of England.. And April 23rd is St George's Day

"St. George was a knight and born in Cappadocia. On a time he came in to the province of Libya, to a city which is said Silene. And by this city was a stagne or a pond like a sea, wherein was a dragon which envenomed all the country. And on a time the people were assembled for to slay him, and when they saw him they fled. And when he came nigh the city he venomed the people with his breath, and therefore the people of the city gave to him every day two sheep for to feed him, because he should do no harm to the people, and when the sheep failed there was taken a man and a sheep. Then was an ordinance made in the town that there should be taken the children and young people of them of the town by lot, and every each one as it fell, were he gentle or poor, should be delivered when the lot fell on him or her. So it happed that many of them of the town were then delivered, insomuch that the lot fell upon the king's daughter, whereof the king was sorry, and said unto the people: For the love of the gods take gold and silver and all that I have, and let me have my daughter. They said: How sir! ye have made and ordained the law, and our children be now dead, and ye would do the contrary. Your daughter shall be given, or else we shall burn you and your house.

When the king saw he might no more do, he began to weep, and said to his daughter: Now shall I never see thine espousals. Then returned he to the people and demanded eight days' respite, and they granted it to him. And when the eight days were passed they came to him and said: Thou seest that the city perisheth: Then did the king do array his daughter like as she should be wedded, and embraced her, kissed her and gave her his benediction, and after, led her to the place where the dragon was.

When she was there S. George passed by, and when he saw the lady he demanded the lady what she made there and she said: Go ye your way fair young man, that ye perish not also. Then said he: Tell to me what have ye and why weep ye, and doubt ye of nothing. When she saw that he would know, she said to him how she was delivered to the dragon. Then said S. George: Fair daughter, doubt ye no thing hereof for I shall help thee in the name of Jesu Christ. She said: For God's sake, good knight, go your way, and abide not with me, for ye may not deliver me. Thus as they spake together the dragon appeared and came running to them, and S. George was upon his horse, and drew out his sword and garnished him with the sign of the cross, and rode hardily against the dragon which came towards him, and smote him with his spear and hurt him sore and threw him to the ground. And after said to the maid: Deliver to me your girdle, and bind it about the neck of the dragon and be not afeard. When she had done so the dragon followed her as it had been a meek beast and debonair. Then she led him into the city, and the people fled by mountains and valleys, and said: Alas! alas! we shall be all dead. Then S. George said to them: Ne doubt ye no thing, without more, believe ye in God, Jesu Christ, and do ye to be baptized and I shall slay the dragon. Then the king was baptized and all his people, and S. George slew the dragon and smote off his head, and commanded that he should be thrown in the fields, and they took four carts with oxen that drew him out of the city.

Then were there well fifteen thousand men baptized, without women and children, and the king did do make a church there of our Lady and of S. George, in the which yet sourdeth a fountain of living water, which healeth sick people that drink thereof. After this the king offered to S. George as much money as there might be numbered, but he refused all and commanded that it should be given to poor people for God's sake; and enjoined the king four things, that is, that he should have charge of the churches, and that he should honour the priests and hear their service diligently, and that he should have pity on the poor people, and after, kissed the king and departed." I apologise to my longer term readers, Having just realised how late it is, and things yet to do, I cheated and lifted text from two years earlier in the blog. But I bet you'd forgotten it if you ever saw it.

* A Norse god came riding one day. Galloping up to the town gates, he pounded upon them and demanded entry. As the naked rider rode into the town square a curious crowd gathered, (never having seen a naked Norse god in their town before)The rider shouted, challengingly,

A voice in the crowd replied

Posted by soubriquet at 5:41 pm No comments: 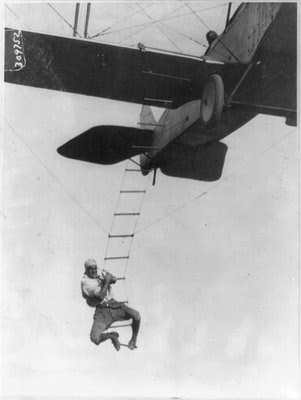 Ireland's Ryanair is famous for it's cheap, no-frills approach to air travel. It was recently reported that they were considering a charge for using the toilet aboard their flights.
They charge for everything they can think of.
Grit in the Gears has been pondering the difficulties facing airlines, and has come up with this invention, which, it is hoped, will save millions of pounds when scaled up.
Yes, ladies and gentlemen, you saw it here first. No landing fees! A huge part of the cost of air travel is the landing fee charged by airports.

Using Professor Soubriquet's patent Aerial Ladder Embarc-Disembarc system, passengers can be landed and picked up without the plane ever touching the runway. Accuracy in lobbing the luggage is proving to be elusive, so we recommend you just wear all your clothes and stuff your pockets with the rest.
Bookings are now being taken.

Posted by soubriquet at 5:28 pm No comments: 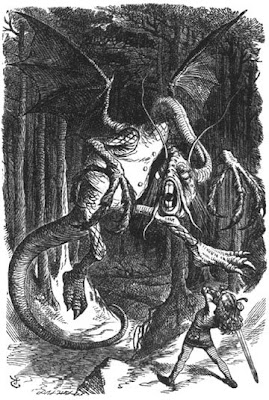 `Twas brillig, and the slithy toves
Did gyre and gimble in the wabe:
All mimsy were the borogoves,
And the mome raths outgrabe.

"Beware the Jabberwock, my son!
The jaws that bite, the claws that catch!
Beware the Jubjub bird, and shun
The frumious Bandersnatch!"

He took his vorpal sword in hand:
Long time the manxome foe he sought --
So rested he by the Tumtum tree,
And stood awhile in thought.

And, as in uffish thought he stood,
The Jabberwock, with eyes of flame,
Came whiffling through the tulgey wood,
And burbled as it came!

One, two! One, two! And through and through
The vorpal blade went snicker-snack!
He left it dead, and with its head
He went galumphing back.

"And, has thou slain the Jabberwock?
Come to my arms, my beamish boy!
O frabjous day! Callooh! Callay!"
He chortled in his joy.

`Twas brillig, and the slithy toves
Did gyre and gimble in the wabe;
All mimsy were the borogoves,
And the mome raths outgrabe.
(from Through the Looking-Glass and What Alice Found There, 1872)

The Pobble who has no toes
Had once as many as we;
When they said "Some day you may lose them all;"
He replied "Fish, fiddle-de-dee!"
And his Aunt Jobiska made him drink
Lavender water tinged with pink,
For she said "The World in general knows
There's nothing so good for a Pobble's toes!"

The Pobble who has no toes
Swam across the Bristol Channel;
But before he set out he wrapped his nose
In a piece of scarlet flannel.
For his Aunt Jobiska said "No harm
Can come to his toes if his nose is warm;
And it's perfectly known that a Pobble's toes
Are safe, -- provided he minds his nose!"

The Pobble swam fast and well,
And when boats or ships came near him,
He tinkledy-blinkledy-winkled a bell,
So that all the world could hear him.
And all the Sailors and Admirals cried,
When they saw him nearing the further side -
"He has gone to fish for his Aunt Jobiska's
Runcible Cat with crimson whiskers!"

But before he touched the shore,
The shore of the Bristol Channel,
A sea-green porpoise carried away
His wrapper of scarlet flannel.
And when he came to observe his feet,
Formerly garnished with toes so neat,
His face at once became forlorn,
On perceiving that all his toes were gone!

And nobody ever knew,
From that dark day to the present,
Whoso had taken the Pobble's toes,
In a manner so far from pleasant.
Whether the shrimps, or crawfish grey,
Or crafty Mermaids stole them away -
Nobody knew: and nobody knows
How the Pobble was robbed of his twice five toes!

The Pobble who has no toes
Was placed in a friendly Bark,
And they rowed him back, and carried him up
To his Aunt Jobiska's Park.
And she made him a feast at his earnest wish
Of eggs and buttercups fried with fish, -
And she said "It's a fact the whole world knows,
That Pobbles are happier without their toes!"
Posted by soubriquet at 12:28 pm No comments:

Krazy Kat from 1916, the Great War was raging, daring young men in flying machines were zooming through the sky, Krazy is in love with Ignatz mouse, and Ignatz responds by throwing bricks....

Gary Rith posted Felix the cat on his blog, which reminded me just how much I love these oldies.
When I was a kid, I always had interesting stuff in my schoolbag, like a miniature steam engine, a gyroscope, a telescope..... I was famous for it, being a collector of eclectica, a romancer of rivets, my bag was known as Felix's magic bag... (no, I was Not known as Felix...) (um... sometimes they called me The Professor, other times? oh. well, ya know... My favourite book was "The Wind in the Willows", and I was the Mole).
Posted by soubriquet at 12:03 pm 4 comments:


Yes, I know it's politically incorrect. But this was 1922.
Word of the day. Rotoscoping. No, I'm not going to explain or spoon feed you with a link. ( you can use google if you need to)
This little movie shows several very clever examples of rotoscoping. Hollywood does it with computers now.
Posted by soubriquet at 11:57 am 1 comment: