I posted this in 2006, but having been looking in the archives, I thought it worth dusting off and reposting, because it still makes me smile. And I love the engine sounds.

Seen today, as I was wending my way across town. The building it's on used to be a pub, but is now split into apartments, mostly, I surmise, occupied by students, as it's firmly in the student/low-rent ghetto.
When it was a pub, I was sub-contracting, back in the early nineties, for a local building contractor, and the workers all used to finish early on a friday, I seem to remember it was at three in the afternoon, We'd all retire to the Little Park (the name of the pub) and drink beer whilst waiting for the boss to turn up and hand out envelopes of crisp new banknotes. Some of the lads would be there from three until they were chucked out after midnight. By then their wages would be significantly decreased.
The pub was surrounded by the meaner parts of town, across the road was a gym, famed for drug dealing, though I'd imagine you could buy almost anything in the pub.
There was a riot there around that time, cars overturned and burning on the street, police pelted with firebombs. It was claimed the other pub nearby, The Newlands, was being used by the police as a centre for covert surveillance of local criminals. The Newlands didn't survive the riot, it was burned to the ground.
That evening, I was out in the area, about half a mile away, with friends, having a meal at an Indian restaurant (Ayesha on Victoria Road), when we got home, the phone was ringing, my pal's girlfriend in a panic, calling from Wales to see if we were alright. "Why?", we asked, and were told that the riot had been on the television news at ten, with film of fire and flames, and riot police, and mobs, and.... we'd wondered why there were so many police vans going past the restaurant, but otherwise? The disturbance was far smaller and more localised than the press ever implied. Most of the people there were probably reporters and camera crews.

You could pretty much guarantee that at some point in the friday afternoon session the table would be visited by some thug offering a still warm VCR (remember those?) or a car stereo, or a nice t.v., or some tools, fresh out of a rear-door wrenched van.
No, it was NOT the done thing to trot to the pay-phone and call the police. (we didn't have little phones in our pockets back then), not if you wanted to retain all your limbs and be able to walk.
However, one afternoon, a dodgy trader tried to sell Big Mick his own hammer-drill, and Mick was not amused. A trail of blood, broken glass and destruction ensued. The thief was pursued outside, to where his accomplice was waiting in a car. By then, about twenty builders and contractors were spilling out of the pub. The car was set about, with boots and then sledgehammers,  then overturned onto its roof. The two thieves were treated in similar manner. I thought it a good idea to set off home, and not to know anything about the ongoing mayhem.
I was not surprised, when a couple of years later, the pub was all boarded up and for sale with planning permission for conversion to several dwellings.
The area's not so run down now, a lot brighter. I still wouldn't leave a car parked there though. 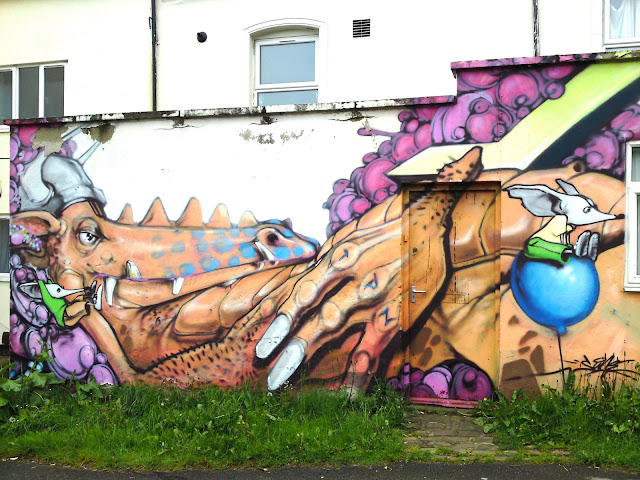 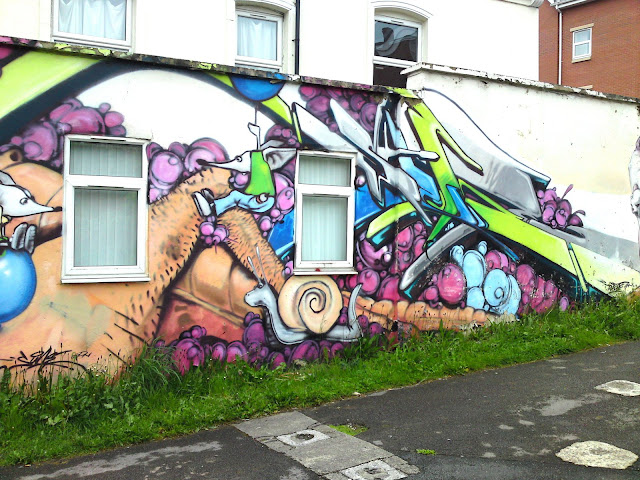 My limited abilities with image-stitching glued these together into a panoramic single. There was another pic, of another figure at the far right, but I accidentally deleted it. Oops. 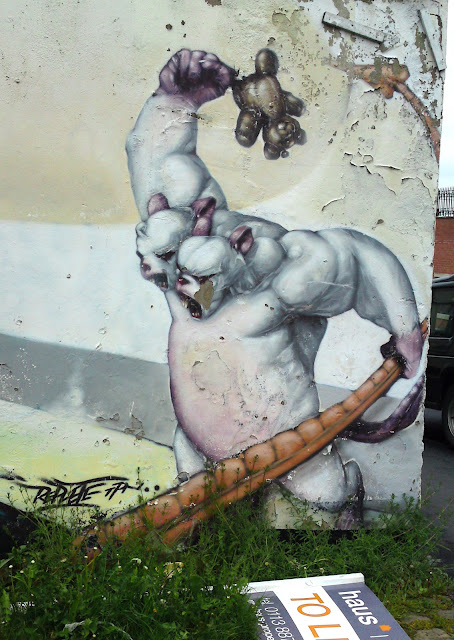 Found it! He's bashing the dragon's tail with a teddy-bear.

Painting by 'Sune' and 'Replete'

Posted by soubriquet at 4:15 pm No comments: