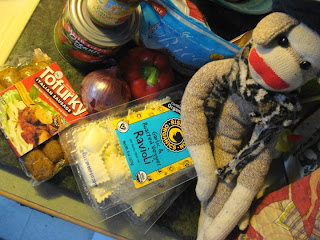 Gary Rith has been hanging wit' the monkees recently. His new partner in crime is a sock monkey called Georges Le Soq.
Little does he know that there's a monkey in my kitchen cabinet. He's a famous monkey, in show-biz, you know, but it all got a bit much for him, he had a rather unfortunate.... What? oh. sorry, Munkey, I won't go into detail, I promise, nothing about the screaming....
So, anyway, he packed a small bag, left the metropolis and travelled north, where he rents living space in the kitchen cabinet.. What's that, Munkey? squalid? what do you mean, squalid? Oh. Well. I did clean the kitchen in July. It's not due for a while. Well I'm busy. NO! tapping at a keyboard IS real activity, Munkey, look, go make us a cup of tea, eh? 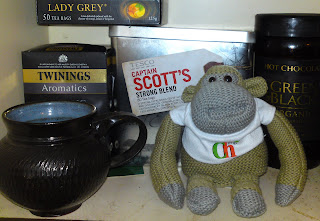 Seen here is Munkey, relaxing at home (next to a cup by The Real Harray Potter- Andrew Appleby, of Fursbreck Pottery, Harray, Orkney. Go to his site if you're a pottery lover).
In Munkey's earlier career, he became famous, with his pal, Al, advertising a digital television service which rather famously went dramatically defunct even before it was launched. Monkey went missing for some time, the stress of being associated with such a hugely failed launch was too much for him.
However, he returned, and he and Al teamed up again, working on a tea advertising portfolio.things seemed to be going well for them.

Until the restaurant debacle.. and the start of the screaming...

So, a month or two back, I heard a knock on the door, and a wet monkey muttered, "I've come about the room"
"What room?" I said.
"The room you advertised in the 'Gazette' ".
"I didn't advertise a room"
At this, the monkey started to cry, brandishing handfuls of paper money "I can pay, I don't need much space, really, I... I... I've got nowhere else to go..." At this he started sobbing. Huge, gulping sobs, and I, cruel though I am, thought again. I put my foot back on the floor, that foot that was poised to launch the wet knitted monkey far out into the street, and for a moment, my heart softened. I snatched the suitcase full of money,  "That'll do as a deposit!", and I showed him to his room.
We get on alright. I'm tired of bananas. He cooks a good chili.
Posted by soubriquet at 6:34 pm No comments:

Ever Clicked Something by Mistake?

-And lost an age's worth of thoughts down the plug-hole?
It happens to me all the time. Some of you may have noticed that I seem to do more writing, when I have a comment to make on somebody's blog, than I do in writing my own blog. I used to lose blog posts too, an hour or two's worth of  writing, uploading pics, rewriting, and then Pfssttt! gone.
When that happens, I'm often too demoralised to continue, I think, well, I'll return to that tomorrow. But I don't because my creativity, my indignation, whatever it may have been, has been burned out in that first write.


Which brings me to the point of this post. I use Firefox as my browser.  I was installing the plug-ins and add-ons that I find indispensable and I found one that's just brilliant, the cat's pyjamas, the bee's knees, the dog's b..... er, well. it's very good. No more losing the contents of a comment form, Like when you hit the button to post the comment, and.. it doesn't, it's not posted, but it's gone from the comment form.  This gadget saves everything you type into a comment-box, and should you hit "back", or delete, or go by accident to a different page, returning to a white, empty comment box, a couple of mouse-clicks will restore your typing, bring the dead comment back to life. (it saves on your own computer, not on the web, and will encrypt your musings and password protect them should you be using a shared computer).
That's why it's called Lazarus. No blogger, or blogsurfer, should be without it. Especially the clumsy ones, like me.