My immediate response was to say "Don't be silly".
I told them to look up bats, and the handling thereof, on the interwebs,  and then call the correct, properly trained and equipped people.
I've caught and ejected all manner of unwanted visitors before... rat, mice, pigeons, a sparrowhawk, various stray dogs and cats, but never, to date, a bat. What I do know about bats is that they're more than a little likely to bite, if cornered, they bite easily through leather gloves, and a bite from a bat is to be treated as potentially rabid. The treatment for anybody even suspected to have been exposed to rabies is no joke.

The notes we found said "If the bat has come into physical contact with a human, or is found in a room where a person has been asleep, the bat should be captured and handed over to the government veterinary officer for investigation."
Full face shield, cut resistant sleeves, stout leather gloves...
So, this time,  I turned down the opportunity for adventure, left the batmobile in the batcave, and let the RSPCA sent a bat-trained guy out to catch it.
I was still sent out to find out how it got in... that was easy. The office muppets had left a window open overnight.
Posted by soubriquet at 4:14 pm 7 comments:

It's been a **itty week, I'm still struggling, health-wise, from after-effects of flu, and other troubles. I've had an over-active immune system all my life, asthma and eczema. Something or other, possibly the flu, has triggered the eczema, which means I itch all over at the moment. And for the last month or so too. I see my consultant dermatologist in two weeks time, and my general practitioner is being a bit cautious. I should invoke my free pass to see the consultant earlier, but I'm trying not to cry wolf too often. I'm eating antibiotics that I think are probably designed for horses, judging by the size of the capsule, and applying scarily strong steroid creams. It's not really working, kinda holding it back a bit. I think a seven-day dosage of oral prednisolone would get it under control, but my doc's not receptive to that idea. I'll call the specialist tomorrow and see if i can get a blood test before my appointment, which will increase my chances of getting some sort of solution on the second of february.
All this means not much sleep, not much sleep means weakened response to imfection, it goes in circles.
So. a shitty week? Yes.   My mother's diagnosis with Alzheimers has led to her getting a better alarm monitoring system. But she keeps fiddling with the wristband emergency call button. Twice last week she's knocked it off her bedside table, and the monitoring centre sees that as her having fallen, so they call me and I crawl out of bed at two in the morning, drive the couple of miles there, and find her fast asleep, no emergency at all. Last week there was an emergency, she did fall, and had 24 hours in hospital.
Yesterday, I got the call in the early afternoon. She'd pushed the alarm button, and the monitoring nurses couldn't understand what she was saying, so I raced up there to find her.... asleep.
When i asked her about the alarm call, she had no recollection  of it. Nor of the phone by her bed ringing as I tried to get through to her.
So I called her surgery's out of hours service, got a nurse who took me through a many-questioned checklist, and the conclusion was that she was confused, but showing no obvious symptoms of stroke or heart trouble, no obvious fall injuries.
So they sent a doctor out, and six  hours after the original incident she was on her way to hospital.
Luckily, my brother went along with her, so I managed to get a bit of sleep. Today? well, I've been told to ring back, early afternoon.
And my phone's dead. Luckily, I have a spare. But, whilst talking to the doctor last night, the display went blank, and the phone quit. But it wouldn't charge, and when I eventually had it connected via usb to the computer, it would appear to start up, but had no display. I connected to the manufacturer's site, downloaded the diagnostics package and the software repair/re-install package. But it's still dead.
So tomorrow I have to get a replacement organised, I have it insured via the service company, so that should not be a problem.
Maybe I've bashed it just too many times.
Earlier in the week, the shit was deep. Tuesday. A tenant called to say smelly water was coming up out of a manhole on the car-park.
And it was. Very smelly. I had to lift eight other manholes, mostly heavy  cast-iron ones, to figure out where that comes from and runs to. We have a drainage plan, not to scale, and fifty years or more old, showing all sorts of buildings and settling tanks all over the yard, which are no longer there. I instigated, about ten years ago, an underground survey, cameras and radio-tracing of the active drains. Unfortunately, our directors have filed that very expensive document under "lost", so the only way to do it is to lift covers and try sticking drain rods into anything that seems to go in the right direction.
Having done that, the rods go so far, and are getting stopped by something solid, like bricks, or a collapsed pipe. We call up the big vacuum tanker, but they send a little pressure-jetting tanker, which, surprise surprise, huffs and puffs and fails to blow the house down. The driver for the big blue tanker is on another job, and the only other guy licenced to drive it is on a ski slope in austria.
So we book the big blue one for the following morning, eight thirty. We're used to it not arriving on time, but at ten, when we ask where it is, we're told it's stuck. In the middle of the road junction outside the fire-station. Run out of diesel.
And restarting a truck when it's run dry is not quite as simple as chucking a gallon in and turning the key until it fires. Eventually, just as I was leaving for my eagerly awaited chicken in black bean sauce lunch at the chinese cafe, my phone rings... The tanker's just arriving at gate 3. Wonderful.  First job is the  suction side. I won't post the pictures of what was in the six-foot deep chamber under that manhole lid. It wasn't pretty. Or sweet-smelling.
Then there's the big jetter, to pull debris out of the pipe, both up and downsteam. A couple of bricks, a few bits of concrete. Where they've come from is anybody's guess until we can get the crawler camera into the pipes.
Wash down the yard, jet both legs of pipe until running clear, job done.
Have a wash, go to cafe. 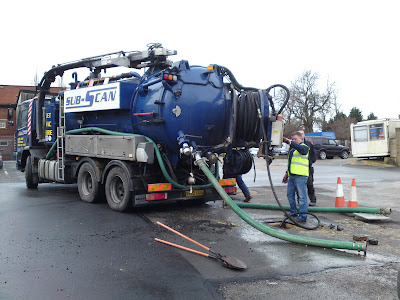 Whilst the brick debris in the 9" drain was probably the locus of the blockage it wasn't the cause. The cause is the person or persons who are flushing disposable cloth wipes. They're what snagged on the brick and caused a plug of fibre cloths to form in the pipe, thus blocking it totally, causing a six foot deep chamber to overflow, causing a couple of hundred yards of pipe to fill, causing drains elsewhere to overflow and stink.
Next week I'll be tracking back to find the culprit.
Ignore the label that says "flushable". If it's stronger than wet toilet paper, it shouldn't enter the drains. ever.
As a test, take a couple of sheets of toilet paper, put them in water, stir. See? They break up into pulp almost immediately. Now try that with a "flushable" wipe.
Most people think that pretty much anything that flushes out of sight is gone forever. Now look at that tanker. Imagine how much that tanker, a backup van, and three men, charged at a minimum of one half day will cost.
Plus the best part of a day of my time, plus I'll need to set a new manhole lid and frame, as we broke it trying to get it out.

We also had raw sewage pouring down the yard and out of the gate onto the road for 24 hours, some of that sewage entered a little stream that runs through peoples gardens.
And all that's only a little bit of my week.

Update: visited the old lady in hospital, she's in a better state today, knows what day it is, where she is, and what's happening. She was happily chatting to the similarly aged lady in the next bed, the nurses tell me they're bullying her a bit to get her to drink more, as dehydration is partly suspected.
A CT scan is booked tomorrow to check out the lymphoma, hopefully that will say it's defeated. They'll also be looking for any evidence of a mini-stroke.

Also got my phone replacement sorted, a new one will be delivered to my work address between 9 a.m. and 1p.m.

Good thing I've got a spare though.
Posted by soubriquet at 5:20 am 5 comments: