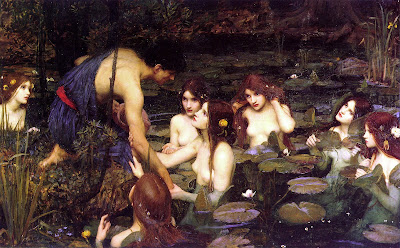 Hylas and the Nymphs (1896)
John William Waterhouse 1849-1917
Following on from my earlier theme of mermaids, sirens, and other seductive aquatic maidens, it would be remiss if me not to give some space to the freshwater variety.
in the first picture I posted we saw a hapless maiden being hauled from the depths by a crew of brawny fishermen, and I suspected that her wishes might not be altogether respected. Then I posted Odysseus, bound to the mast, as the seducing sirens board his ship, the fearful crew desperately hoping their wax-plugged ears would save them from being seduced by the maidens' song, and then destroyed.
Here we see Hylas, the son of King Theiodamas of the Dryopians.... Or maybe not. Heracles, (or Hercules, as he is also known) had an adulterous affair with Theiodamas' queen, and she bore a son,  Hylas, famed for his beauty.
Heracles and Theiodamas fought, and Theiodamas was killed. Heracles took Hylas, and raised him as his son.
The two of them were part of the crew of the Argos, they were Argonauts, proud heroes, sailing from adventure to adventure. The Argos anchored in a quiet bay at the isle of Mysia, and the captain, Jason, sent some men ashore to find food and fresh water. Hylas was a water boy.  And he happened upon a pool, a beautiful pool of clear water, a pool of lilies, and so, Hylas knelt, to scoop up the water, but, in a moment, he was surrounded by naiads, nymphs of the pool,  they rose up out of the water, entranced by his beauty, oh, those girls had perhaps read about boys like him, in "Naiad's Weekly", they'd giggled and wondered what boys were, you know, really like... maybe they'd had fantasies, maybe they'd taken turns to pretend to be a boy, to swagger, and talk in a deep voice, to kiss, perhaps.
Oh well. I'm sure you can imagine it.. Teenage naiads. Hormone soup... And suddenly, there he is,  a real boy, the most perfect boy in all the world, kneeling at the edge of their very own pool. So close you could almost... touch.... him. Ahh..
And so they did. They touched him. Looked upon him longingly, they wanted him, this new thing, this boy, so angular, muscly, hard; and he, face burning red, not knowing where to look, oh my, he a boy from a ship filled with big, ugly, smelly men, never  touched a girl before, suddenly surrounded by soft, pink, fragrant, (not to mention pert-bosomed and totally naked) girls, oh my, no wonder he dropped the pitcher, stammering  as strange feelings arose, "But I must go back to the ship.." "No, please, stay a while, stay with us, here, let us loosen your tunic, so, don't shy away, we just want to....."
Look closely at the picture.  Look at how her hands are placed, one at his wrist, the other behind his upper-arm, just above the elbow. Any law-enforcement officer will recognise that grip. It seems innocuous, until he tries to move.  A little push on the wrist, and a tug on the upper arm, and Hylas will topple forward, into their world.
What happened next? All we know is in the official report. The others all returned to the ship, which was by then ready to set sail, Hylas did not. A search party went out, found the empty pitcher by the pool, but no sign of the boy. They searched the entire island.
He was never seen again. What was his fate? We'll never know.

This would, of course, be wise advice for The Sisterhood of the Pointy Heels. (The Sisterhood of the Pointy Heels, Graduation Ceremony)
Posted by soubriquet at 4:21 pm 2 comments: