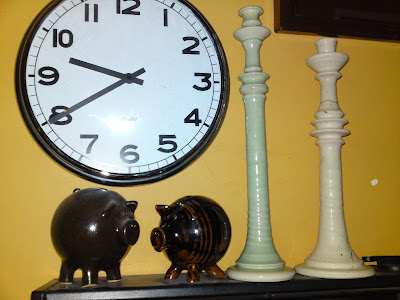 The Red Dirt Mule, guest blogger of the previous post, is leaving on a jet plane. Now she's discovered my secret stash of piggy banks, and learned how to ransack them. See, I was reading a book called'Valverde's Gold'
about the lost treasures of the Incas, and it seems treasure fever got to her. No sooner had I read out a little excerpt than she was.... "Takin four paces nor-nor-west from the ponderin'tree, two to the east, pause by the bookcase and...... home-in on the piggies above the gas heater...............
"How do you get the money out?" she demanded, looking around for a hammer.... I explained the finer points of pig ransacking, then moved on to advanced pillaging.

The pig on the left was made in my pottery in Yorkshire, in the late 1980s, the other?1982, in Ristiina, Finland.
Oh yes, wherever I have travelled, I've made pigs.
I plan to teach the Mule to make them, in due course.
We hope to re-unite the pigs, sooner rather than later.
Posted by soubriquet at 3:46 pm 2 comments:

A guest post by Guestblogger Red Dirt Mule,
The first day trip of my mulish journeys was to the fair (fairly insipid) (Gritinthegears note:The mule saw only a bit of Haffilax, so, Haffilaxers, please extend a little courtesy and tolerance her way!)... town of Halifax to gather clay for my beloved donkey. First a stop at the Piece Hall... 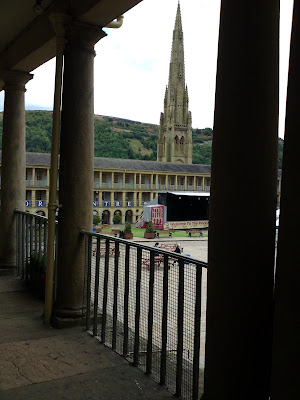 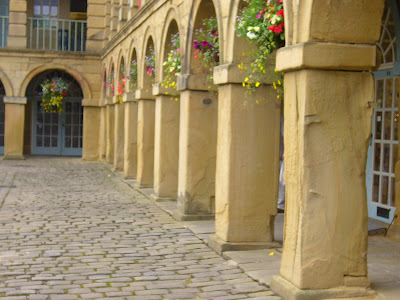 The Piece Hall
(1779)
.....and a quaint book store run by an elfin impostor who fell under the spell of red dirt mulish charm. 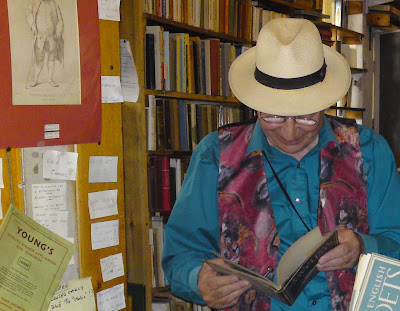 Next, to the 'mud' store. (Navigation to such provided by the mule and her innate sense of location and ability to read the signs ...) Back end loaded with what felt like a ton of bricks (no pun intended) and away back to our abode.

Fast forward to the always too-soon ending of my British sojourns, and my donkey insisted ... no he DEMANDED that we spend a day in clay. I learned quite a few interesting tidbits regarding these potterish folk. Let me elucidate:

1. Spending a day with clay requires spending half a day in preparation: clearing out a workspace in Mum's garage was no sloucher's task.

2. When potterish donkeys begin muttering beneath their breath, it's time for the more horticulturally minded mule to find a pair of pruners and start working in Mum's garden. I called it my quiet red mule 'side-step.'

3. Potterish folk use a lot, and I mean A LOT, of stuff to do potterish things. Fetch me warm to the touch water; I need a smallish sponge; where's my work board ??? Now you might can see why I kept disappearing into the garden under the guise of 'helping Mum out .....'

4. So there the mule sat, with hooves propped up, sipping a delicious cup of tea with dear Mum in the garden - enjoying an unexpectedly sunny cool day. And the donkey ???? As I rounded the garage door to hand him his 'cuppa,' - but what to my wondrous mule eyes did I see ? But a fair bowl with a swirly line being neatly cut off the wheel. 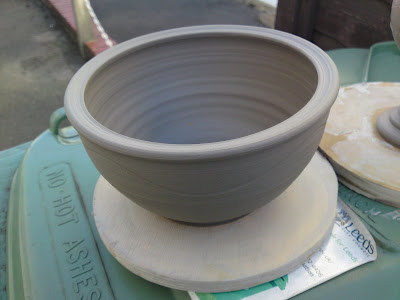 5. Be prepared to be Be-Dazed.

6. In no time, my fair donkey was ram's heading his clay, twirling his swirly wheel, splashing fingers and sponges in water whilst amazing shapes rose and fell beneath his most capable of hands, (oops, I mean 'hooves.')

7. Mum and I brought our seats over to sit in THE FRONT ROW of this Be-Dazzling Display of Donkey and Clay Reunion! And we were quite rewarded for our efforts. Often our potterish teacher asked questions, lectured on techniques, explained the various strange tools of potterly trade and took requests.

(An aside: as a mule, I must confess that sitting at the front of the class is not always the wisest of choices as I tend to snicker a lot and Mum was NO HELP ATTALL in keeping me out of trouble. As a result, the donkey paused often to reprimand our errant ways ..... I'm still snickering ..... I mean, you should have SEEN how BIG that, ummm, 'column' of wet, pointed clay got before the donkey squished it down again .........!!)

8. Our donkey potter, back on the bicycle of throwing on a wheel, began taking requests: a goblet, an egg cup 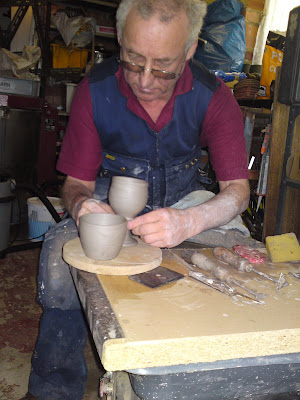 Yes, let me pause yet again for another aside: All who know the red dirt mule, know of my search and subsequent discovery of Gary Rith's pottery piggy banks. So what's the first thing I see when I reach my beloved Donkey's home ??????? THAT'S RIGHT! A piggy bank. A POTTERISH piggy bank made by none other than my beloved donkey hisself. Welllllll I'll swwaannn. (those are Lady-like mulish swearing words). Yep. I was fit to be tied. Donkey's been holding out on me. Knew I was on the hunt and kept his piggy secret-like from me. AND THEN ........ : add insult to injury, he showed me two MORE piggy banks of his that are in dire need of a firing. 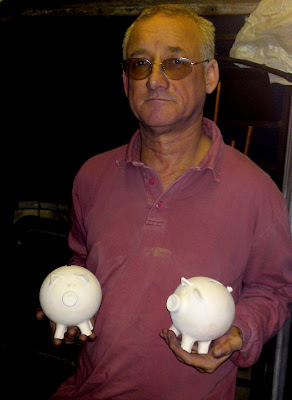 So as a test of his BRAYING ways ..... I requested he throw a piggy bank. Not just any plain ole piggy - I wanted a BLUE RIBBON PORCINE!!

9. And away he went. A whirling, a twirling, a dampening, a sponging, a trimming, a blow-torching (yep, potterish folk like blow torches !!) 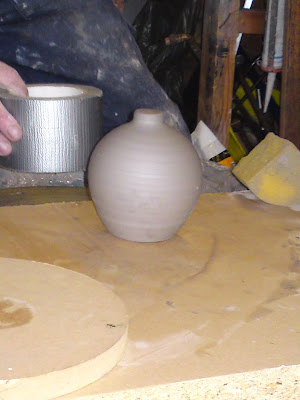 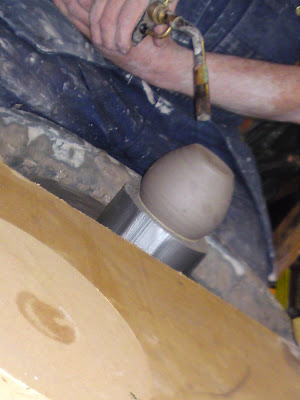 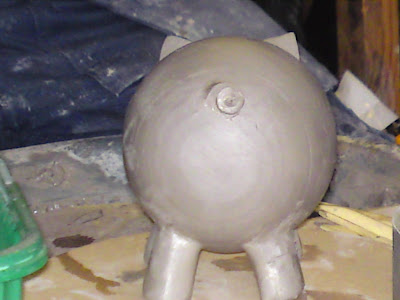 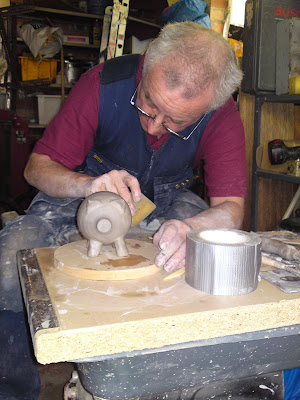 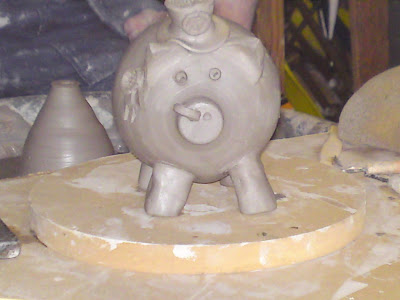 And he prepared the most BE-DAZZLING blue-ribboned pig in front of our eyes. Mum and I were quite impressed and clapped loudly for the top-hatted fellow. 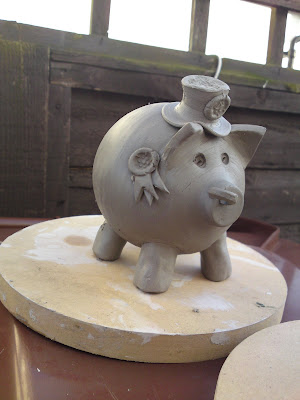 10. Potterish donkeys are able to throw exquisite wine goblets in ONE PIECE..... yep ..... he started with a spirally stem and then flared a bowl and voila' - a cup. 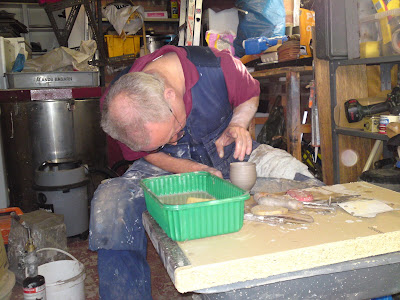 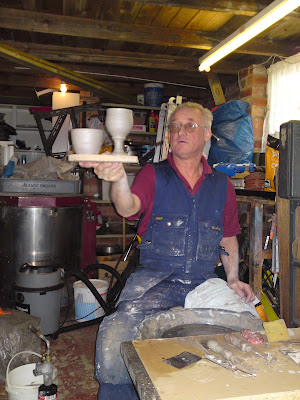 Later I watched as he returned to his cups and hollowed out their stems. 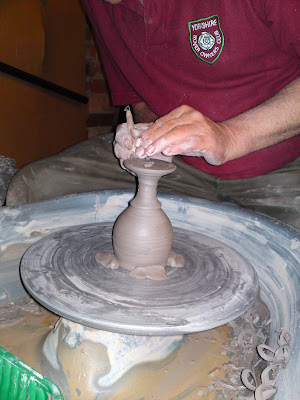 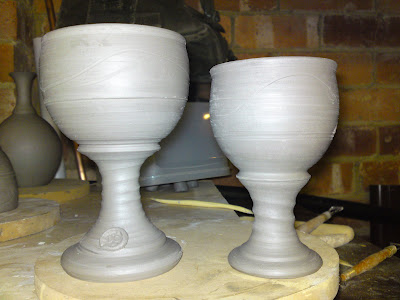 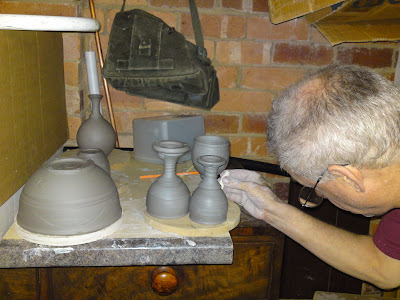 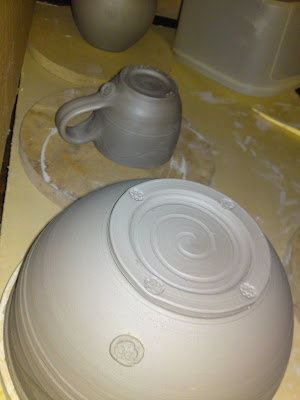 11. Oh. And the donkey cooked dinner somewhere in between all of this potterish stuff as well. I told you he's BE-Dazzling!

12. Yes. The mule put her hooves to the wheel. My beloved is a patient teacher, centering the clay on the wheel for me; showing me how to hold my hands, one hoof steadying the other. And I was happy to play and smash and squish and TRY to form some sort of cylinder. The best part ?? When I was done, he 'autopsied' the piece I had squished and showed me where I had done well (fairly even wall thickness) and where I had failed (too thin on the wall; too thick at the rim.)

When I asked him how did it feel to be pottering again (after .... 9 years + ????) The donkey paused ...... 'Well, it's a bit like riding a bicycle. You never forget how.' And indeed, my beloved potter turned his wheel, cupped his hands and formed beauty out of clay ... with nary a sweat bead on his brow. He makes it look so darn easy !!!! 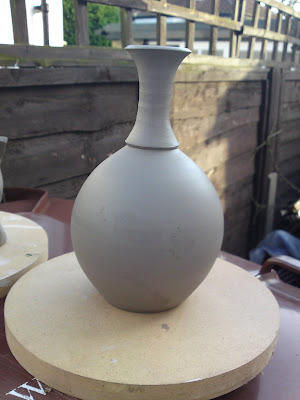 (ps. he still can't beat me at scrabble. but i do take pity on him. donkey dictionaries are notoriously lacking ....)
xLDru>en GoogleC
(Gritinthegears note: The mule saw only a bit of Haffilax, so, Haffilaxers, please extend a little courtesy and tolerance her way !)...
Posted by soubriquet at 2:22 pm 4 comments: