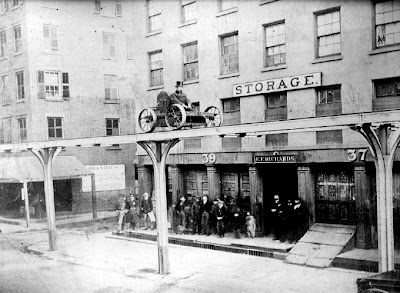 Here we see Ebeneezer,
The founder of Soub-Labs, (or, as it was originally known: "The Ebeneezer Soubriquet Laboratory Foundation for the Invention of Unnecessary Equipment and Commodities, and the Investigation of All Matters Curious and Inconsequential") trying out his tremendously aforethoughtful device, entitled "A Most Serendipitous Means for the Avoidance of Rush Hour Traffic, by Means of Travel Above the Crowded Streets".
As you see, this incredible invention was invented a little too much before rush hour had itself been invented, to achieve its full glory.
Had the device been patented a mere fifty years later, the story might be different.
It was, in a modest way, successful. What you can't see here is the elegant method of propulsion. Behind Ebeneezer sits the projection drum, which casts corn onto a central track in front of the carriage. Ebeneezer holds the reins to a trained team of twelve extraordinarily strong sewer rats, (sewer rats scored highest in traction strength, but early experiments could only take place at night, due to the underworld-dwelling rats' aversion to bright sunlight, this problem being solved by issuing the rats with tiny designer ray-bans)...
All went well until Ebeneezer's arch-rival, that b@stard, Edison, slipped ergotamine into the grain sacks. ~If the contraption had sported the wings Ebeneezer had earlier sketched, he might have survived when the rats went berserk.

Posted by soubriquet at 8:44 am No comments: