Not Grit in the Gears... 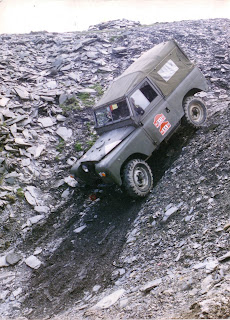 I am, I admit, a serious abuser of machinery. I have toys.
So, the green thing, as seen above, has been dormant since about a year and a half ago. I was using it, at work, to pull tree stumps out of the ground and drag them up the field. Seeing how successful that activity was proving (our general labourer had spent all the morning trying to dig out one stump), I decided to get involved and ripped six out of the ground in under an hour..., my boss suggested that I might try the same tactic on the steel barrier-posts in the car-park.  And I, being a fool, said... "Okay".
Now, of course, when you're on a field, on grass and earth, the amount of torque you can put through any one drive-line component is limited by the coefficient of friction between the tyres and the surface beneath them. On grass and earth, what happens is the wheel grips for so long, then spins, throwing out a divot, or a steady stream of muck. The force is dissipated by the slippage and displacement of earth.
When the object you're pulling at is a six inch square, five-foot high steel post, filled to the top with concrete, and embedded to a depth of two feet, in concrete, and the tyres are on very grippy tarmacadam  surfacing, then the wheel doesn't spin. Something else happens.
I thought I'd broken the transfer-box, because I could still drive in low-ratio four-wheel-drive mode, but transfer to high, and zip. Just a whirring sound. So I was convinced I'd have to do a gearbox/transfer box transplant, and as it's not too far back that I'd done a complete, from the ground-up rebuild, I was not looking forward to the prospect. today, I decided to go and get started on an investigatory process.  First thing was, the damn thing wouldn't start. No fuel... well, fuel in the tank, but none at the carburettor, so I proceeded to strip out the fuel pump, dismantle and check. The filter-gauze was blocked. It looked as though it had been varnished. There's some nasty stuff in unleaded fuel.  It doesn't take kindly to being left standing for a year and a half, so that job took a couple of hours. Once the fuel was getting to the engine again, I could drive to a more comfortable working place, and jack the wheels up.
Now I could engage drive and see what was happening. In 4-wheel-drive mode, both the front and rear propshafts were spinning, but only the front wheels were obliging.
Well, that's a relief, because it rules out the dead transfer-box hypothesis. Duh. If I'd thought about the time of failure and the nature of the fault, I should have already figured out the most likely culprit. If it was driving in low ratio but not high, what's the difference? High uses  2 wheel drive as default, 4 wheel drive is selected by thumping the top of a big yellow button on top of the transmission tunnel. Bang. It drives. So the front wheels are doing the biz, but not the back ones. Obvious. What a muppet I am. If the propshaft rotates but not the wheels, it's either the differential, or a halfshaft... So I take off a drive flange....... 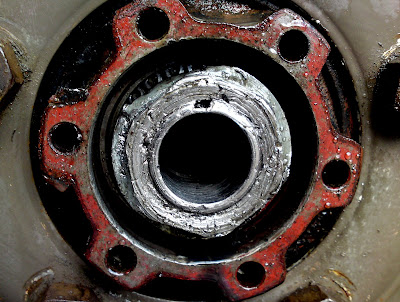 Oh dear. The tooth-fairy's been playing about in there, chewing at what should be a nice flat-faced hex-nut.... 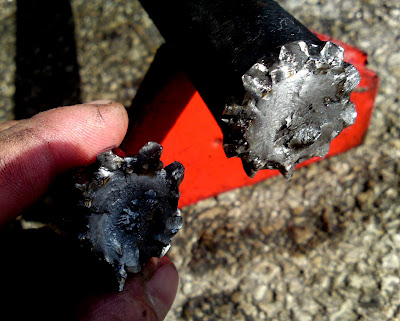 This is where the toothy bits came from. Very hard, very tough  steel, twizzled apart, like play-doh.
Gnaah! 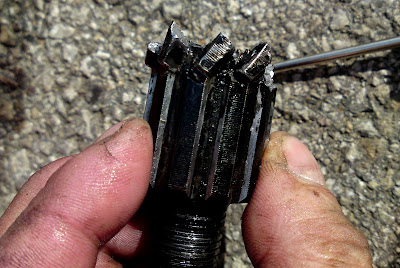 Surely that's not supposed to happen?
And of course, I've been trying to curb my hoarding tendencies, and sent the spare axles to the scrap-metal dealer a year, after the rebuild. I've still got a lot of spares, but.... not the bits I need to fix this. Tomorrow, I'll go see my pal Ken,  and see if we've got a spare set stashed in the pile of really important stuff that his wife keeps telling him to get rid of.
Revised Text: They're not hard to get at all, new, and, would you believe, cheaper than four gallons of unleaded!
That's ridiculous, but  heartwarming; forged, machined, heat-treated and not eye-wateringly expensive. Oooh! Shiny new parts! Might just put them together tomorrow! 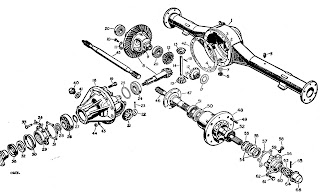