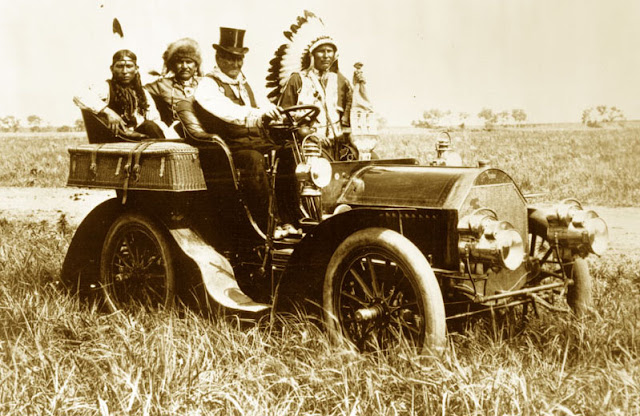 Geronimo was in captivity, but, by the early 1900s this had mutated to a sort of 'house-arrest'. Geronimo, along with a number of other Indian leaders, was held at Fort Sill, Okla. What we see on this day, is Geronimo, paraded for curious white folk to see, a photo-opportunity day.

The car is not his. It belongs to a ranch. A vast ranch, legendary as the biggest ranch of its day, the Millers 101 Ranch, at Bliss, Oklahoma. When the government opened up the land for claims, "Joe Miller raced off, at the crack of the pistol, on his father’s Kentucky thoroughbred, riding forty miles to the desired claim. The horse that had run the race so nobly used his last breath to finish, and fell dead at the close of day on a spot that his rider has marked with a monument to his memory".
The Millers also leased land from various other local owners, including the Ponca Indians. The rather impressive chap to Geronimo's left was Edward Le Clair Sr, and Geronimo so admired the beaded waistcoat Le Clair wore upon the day, that Le Clair gave it to him as a gift. (Geronimo died in 1909, four years after this picture, and was buried in that waistcoat. He's still wearing it now*).

The wild west show was without a doubt, the biggest show of its kind. 65,000 flocked to it by rail, to see all the myth of the Old West re-enacted before their eyes, teepees, cowboys, cattle-roping, stagecoaches, gunslingers... And famous Indians, the semi-mythical old enemy, yet at the same time the 'noble savage'.

And, most famous of all, Geronimo.

While writing this post, I've sought out many original sources, and learned a lot about Geronimo.
I know now that he was not a warrior, to begin with, nor was his name Geronimo. His name was Goyakhkla, and he was a Bedonkohe Apache, living on Bedonkohe land near Gila Bend in what is now New Mexico, but was then territory of Mexico.
What turned Goyakhla from a peaceful life into a feared warrior, a legendary leader, hunted by the white  man for over thirty years?
On March 6, 1858, a company of 400 Mexican soldiers from Sonora led by Colonel José María Carrasco attacked Goyahkla's camp outside Janos while the men were in town trading.

In Geronimo's own words: “Late one afternoon when returning from town we were met by a few women and children who told us that Mexican troops from some other town had attacked our camp, killed all the warriors of the guard, captured all our ponies, secured our arms, destroyed our supplies, and killed many of our women and children. Quickly we separated, concealing ourselves as best we could until nightfall, when we assembled at our appointed place of rendezvous--a thicket by the river. Silently we stole in one by one: sentinels were placed, and, when all were counted, I found that my aged mother, my young wife, and my three small children were among the slain. There were no lights in camp, so without being noticed I silently turned away and stood by the river. How long I stood there I do not know, but when I saw the warriors arranging for a council I took my place."

"He returned home and burned his tepee and his family’s possessions. Then he led an assault on a group of Mexicans in Sonora. It would be said that after one of his victims screamed for mercy in the name of Saint Jerome—Jeronimo in Spanish—the Apaches had a new name for Goyahkla. "

If you want to read about Geronimo, I'd suggest the Smithsonian article here as a good starting point.

Geronimo was a fierce warrior and a great leader.
There's no doubt he was an implacable enemy, slaughtering settlers, attacking wagon trains, and ranches, but he would never have chosen that life, had not his people been so treacherously slaughtered.
When, eventually, he negotiated a surrender, the terms called for him to be imprisoned for two years, then allowed to return south to his ancestral lands. Like every other deal he'd got from the white man, this would not be honoured. He would never ever see the south-west again, and he would remain, for eternity, in captivity.


They put Geronimo in jail down south
Where he couldn’t look a gift horse in the mouth
Sergeant, sergeant, don’t you feel
There’s something wrong with your automobile?
Warden, warden, listen to me
Be brave and set Geronimo free
Governor, governor, isn’t it strange
You never see a car on the Indian range?

People, people, don’t you know
The prisoners ain’t got no place to go
They took old Geronimo by storm
They ripped the feathers from his uniform

Now Jesus told me and I believe its true
The red man is in the sunset too
They took their land, and they won’t give it back
And they sent Geronimo a Cadillac.

The song, as I've explained, is just a song, not the true story. But I like it. Hoyt Axton's version is better known. 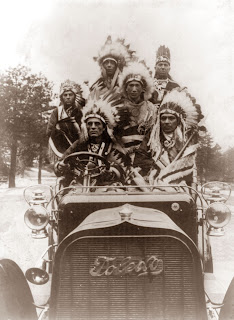 This group is not Geronimo's, I have not tracked down its origin yet. The car's not a Locomobil, either, it's a Toledo.... or is it? The brass badge appears to be covering an earlier name.

The more observant of my readers will note that both of these cars have the steering wheel on the proper side, I've discussed before the driving position controversy. And while there are plenty of reasons put forward for america eventually adopting the napoleonic driving position, there does not seem to be a universally agreed reason.

* Geronimo's burial. He fell from his horse in february 1909, lying injured through a very cold wet night, and never recovered. When he died, the death was due, officially, to pneumonia. He is still in captivity, buried in the Indian Prisoner of War Cemetery at Fort Sill, Oklahoma. However, there have been claims and a lawsuit, alleging desecration of the grave in 1918, by a group of six young army officers, led by one Prescott Bush, son was George Bush Sr, and grandson was George W Bush,  presidents of the United States.


(The grave robbing was exposed when Apache leaders received a photo and information in the 1980s. The informant, fearing for his life and never identified, provided Apache leaders with a photo of the cult museum's display of Geronimo's remains in a glass cage. The informant also provided a copy of a Skull and Bones Society log book, in which the 1918 grave robbery was recorded. According to the Skull and Bones log book entry, Prescott Bush, grandfather of George W. Bush, and five other officers at Fort Sill, Okla., desecrated Geronimo's grave. After receiving the information, San Carlos Chairman Ned Anderson, Thompson and tribal attorney Joe Sparks were in an Apache tribal delegation which met with the Society.

During a series of meetings, they met with Skull and Bones officials and Jonathan Bush, Bush Sr.'s brother, in New York City in 1986. However, Thompson said the skull that the Skull and Bones Society offered to return to the Apache delegation was that of a young boy, not Geronimo, and the Apache leaders refused it.

"They admitted that they called this skull Geronimo. They gave us the skull, but the skull was so small that it looked like a young boy's skull." Thompson said.

"Based on that, we didn't want to take the skull. I think they switched the skull on us."

Thompson said the Skull and Bones Society has other items of Geronimo's, including one of Geronimo's elbow bones and his horse's bridle bit and straps. They have been on display in a museum cage in the secret society's "tomb," as shown in the photograph the Apache leaders received. In the 1980s, Anderson pressed Arizona congressmen, including Republican Senator John McCain, for assistance in retrieving Geronimo's remains. However, Skull and Bones did not return the remains. Anderson gave congressmen a copy of the Skull and Bones Society's internal history, "Continuation of the History of Our Order for the Century Celebration," written June 17, 1933, by The Little Devil of D'121."

This log book states that the attack on Geronimo's grave was in May 1918, at Fort Sill. One of the grave robbers advised the others to proceed with caution. He is quoted as saying, "Six army captains robbing a grave wouldn't look good in the papers."

Skull and Bones members are referred to as "patriarchs" in the early log book. The reference to Prescott Bush is written as "Patriarch Bush." The log book states, "The ring of pick on stone and thud of earth on earth alone disturbs the peace of the prairie. An axe pried open the iron door of the tomb, and Pat[riarch] Bush entered and started to dig. We dug in turn, each on relief taking a turn on the road ·"

"We quickly closed the grave, shut the door and sped home to Pat[riarch] Mallon's room, where we cleaned the Bones. Pat[riarch] Mallon sat on the floor liberally applying carbolic acid. The Skull was fairly clean, having only some flesh inside and a little hair. I showered and hit the hay ... a happy man ..."  )