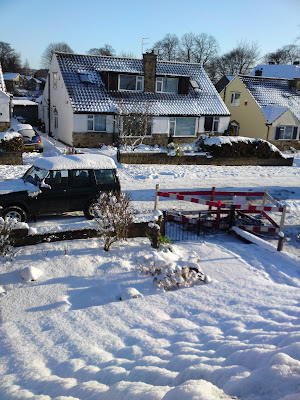 Well, I went over to my mother's house, -she's been away for a while, staying with my brother just north of London. First thing I noticed when I went in, that it was rather cool indoors. So I turned the thermostat up a couple of degrees. Then I thought I'd better check the fridge and chuck out anything that was a bit old.... She's got a tendency to keep stuff opened over-long... So that gave me the need to wash some dishes. Strange. No hot water, even though I let it run a while.

Ahhhhh. And there's a basin-full of water too, the plug's out, and the cold tap's been dripping, so there's already a frozen waste pipe somewhere.

CLICK. oh yes. The brain clicks, go look out of the front window. Hm. There's a hole by the gate. Yes, I'd noticed it, assumed it was to do with the new streetlights they're putting in. I go outside to look. Sure enough, there's a gas pipe visible, and a water pipe ohhh and in Margaret's driveway and front-garden next door, about three inches of ice.

And as I stand up, there's a van coming up the street with a gas-company logo. I wave it down, it seems that the morning before, a water main had burst, eventually fountaining through the asphalt, but... at the same time, the ground movement had fractured the gas main, and water had filled it, causing troubles downhill from here.

But, according to them, the gas was back on.

Not at my mother's house, I told them. We're a different department, it's not our job... oh yes. A bit of argument, and one of the neighbours came out to ask how long it would be before she could have heat? given that it was over 24 hours.

I pointed out that my mother was 87, and if her house froze, and pipes burst, how would they feel? Ring your depot!

The end result was that within an hour we had three blue vans, and got it all back working. Nobody'd been told what was going on, and the gas men said "Things have been busy". I pointed out that the street has a high number of elderly, housebound people, and without heat, for a little longer, they could expect hypothermia, some, my mother's neighbour, Margaret, for instance has senile dementia, she wouldn't know to call for help.

All that sorted out, heating re-lit, I decided to go for a walk in the park, lunch at the Lakeside cafe.  This park, I grew up in it, I know its woods and secret places, its history; it was a hunting enclosure, at the time of King William the Conqueror, 1080 ad, and it was old then. In the late 19th century, a councillor, later mayor of the city, put together a consortium to buy the park from the private owners, he very wisely bought up parcels of land all around the estate, and he and his pals became very rich men, all out of creating a new, fashionable suburb, three and a half miles outside of town, around Roundhay Park. 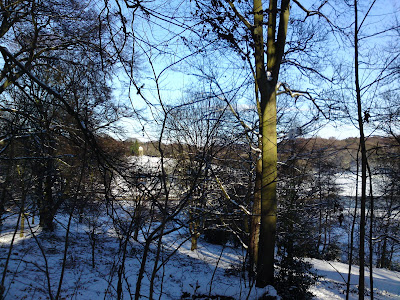 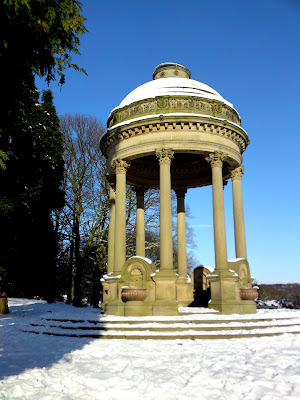 That man whose idea it was to buy the park for the people of the city was alderman John Barran. And here, overlooking the lake, is his memorial, from a grateful populace; 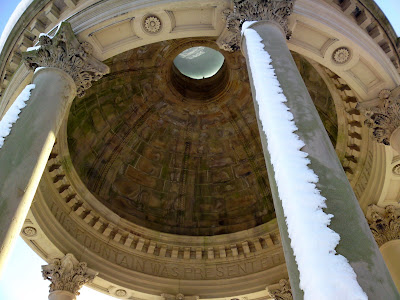 Back, a couple of million years ago when I was at school, Barran's Fountain was one of the landmarks and waypoints on the cross-country running route. Sometimes, but not predictably so, there'd be a teacher lurking somewhere nearby, with a stop-watch and a clipboard, just to make sure you didn't take a short-cut.

The last half-mile of the route was across open fields toward the school. The head of the P.E. dept would often sit in an upstairs room, with binoculars. If, at any time between rising into view, cresting Hill 60, on the park edge, and arriving at the gym, he deemed you had slowed, weren't putting your all into the run, you'd be pulled aside. All the others would be going into the warm, and a few miscreants would be turned outside again. "Run around the running track, until I tell you to stop". "RUN!" And occasionally he'd forget, and we'd be stumbling and staggering on, an hour after school finished, until some teacher, on his way home would say "what are you boys still running for in the dark?" "Oh no, Mr Warham left half an hour ago, go get changed". And they say schooldays are the best days of your life. 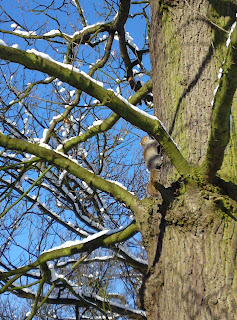 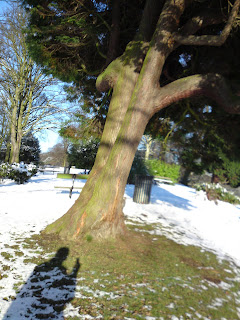 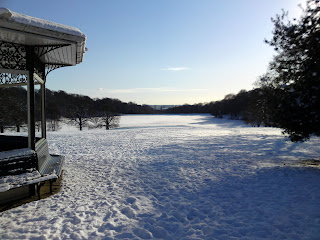 A view down over the icy lake


I finished  with a stroll down to the Lakeside Cafe, built atop the victorian boathouse.  (concerts in the park by the likes of The Rolling Stones, Madonna, Bruce Springsteen, Michael Jackson paid for the cafe, and other infrastructure to be built)
Not so much a cafe, as a restaurant, I had a very good lunch of braised steak in red wine sauce, with seasonal root vegetables. The food is good, the surroundings a little drab, and the price? Significantly more than a good meal in the pub up the road, but I'd ordered before reading the prices.
What I really missed was my long gone dog, Dill, being in the snowy park made me think of him, how he'd race around in the snow, throwing himself into snow-banks and rolling with ecstatic joy... And how he'd have raced from tree to tree, doing his self-appointed job of policing squirrels. And how we'd have a snowball fight. Me throwing, and Dill seeking to catch and destroy them before they hit the ground.

Oh! The Humanity! Latest News From The California Disaster Area!

This is the brother of Scott Adams, (Dilbert's pen-wielding alter ego).
Link to Dilbert/blog

A 6.5 magnitude earthquake has struck off the Northern California coast, about 27 miles southwest of Eureka.

The U.S. Geological Survey says the quake hit around 4:27 Saturday afternoon. Officials say they heard the quake caused some power outtages, but there were no immediate reports of injury or damage.

USGS geophysicist Richard Buckmaster says the quake was felt as far south as Capitola, and as far north as Tiller, Ore.
Posted by soubriquet at 5:23 pm 3 comments: