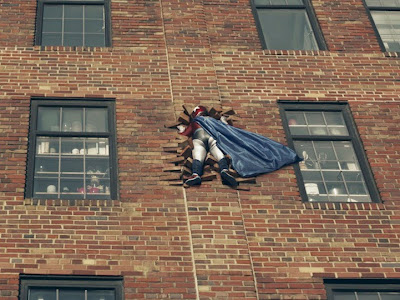 Strolling Around Oxford on a November Evening 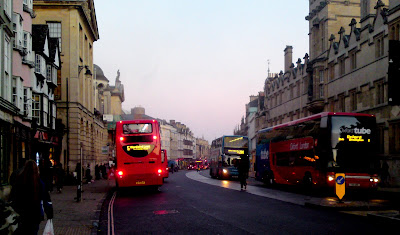 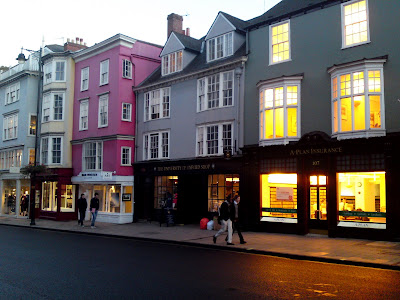 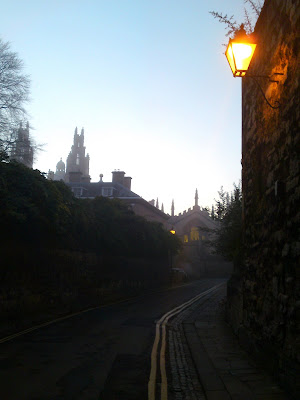 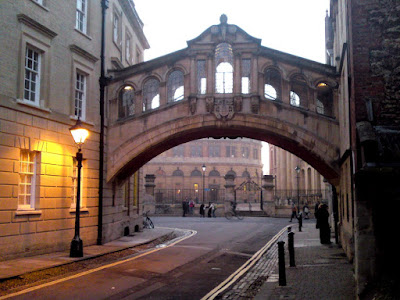 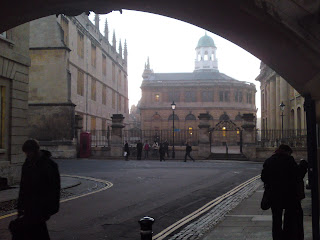 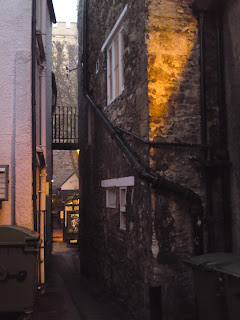 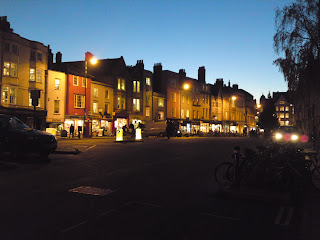 A Good Place to Stay on a Cold and Frosty Night 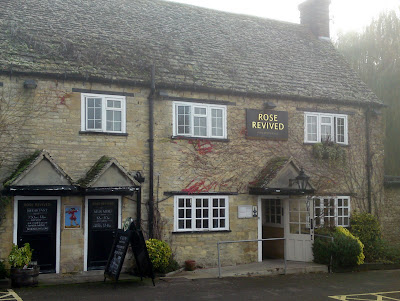 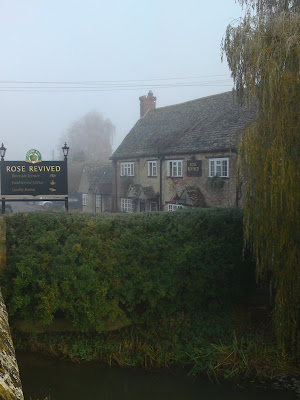 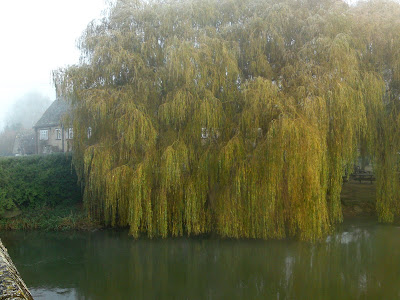 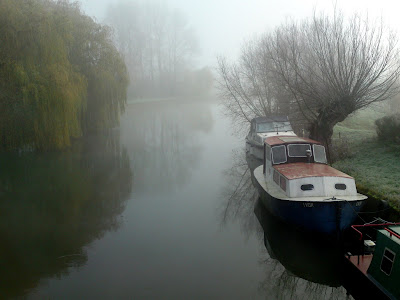 Posted by soubriquet at 5:59 pm No comments:

A Bit of Nostalgia. 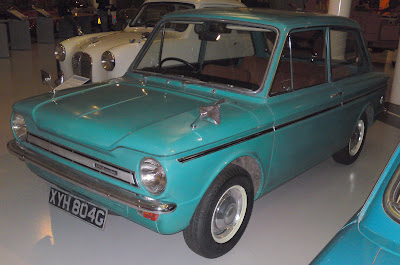 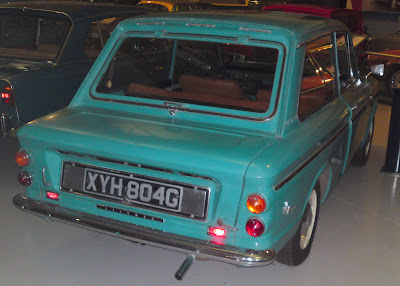 Hillman Imp.
I was, on Sunday, at the Heritage Motor Centre Museum, at Gaydon in Warwickshire.
This little car brought back a few memories. I had one, well, two, really. Designed at about the same time as the Mini, it was, in some ways, a better car. It was rear-engined, had more passenger room, more storage- there was a big luggage space in the front, but the rear window also lifted to reveal a big deep shelf behind the rear seat, which would swallow up the day to day stuff, groceries, overnight bags, coats etc.
The engine was totally unlike the mini's. The mini used a very traditional cast iron block,
mounted transversely at the front, whereas the Imp, breaking new ground, took a light alloy overhead cam engine derived from the famous Coventry Climax engine used in Grand Prix racing cars, and mounted at the rear, driving through an all-new transaxle. My little car was the same year as this, and I really loved it. Yes, it was a flimsy tinny box, but incredibly light and manoeuvrable. That was also its downfall. I don't suppose it ever was wind-tunnel tested in design, as, at speeds over about sixty, the front end tended to lift and with the weight off the front wheels, it would wander a bit. Big trucks displace a lot of air, and the Imp would get blown sideways. A company marketed a solution, they called it a 'Hermes Aerofoil', a wing that bolted on under the front end to provide an aerodynamic downforce. I had a different solution. Ten or fifteen gallons of water, kept in collapsible camping-type bags in the front. That kept it in line, and could be emptied and squished flat if the space was needed.
The car had several other design flaws. The cold start mechanism was an auto choke. It never worked very well. Thus, frosty mornings could be a nightmare I used to pour a kettleful of boiling water over the inlet manifold, which usually worked. Also, the cooling system was all at the back, and was barely able to cope on a good day. If it was a warm day, traffic was stop-start, you could pretty much guarantee overheating, and serious overheating meant the head gasket would fail. I became adept at stripping and reassembling the top end of the engine.
Still, the car was a friend, replaced with a new, improved version that we had for less than a year when some old fool failed to notice the red light and stopped traffic ahead, and drove into the back of it.

I also had a Mini, around those years. The imp was more comfortable, had better space inside, but the mini...
The mini was like a mad little roller-skate on steroids. You could throw it into corners on country roads and fly around them, you could drive flat-out and be totally in control. If I was trying to be a respectable gentleman of suburbia, I'd choose the Imp any day.
But if I wanted to be an uncontrollable hooligan laughing crazily as I drove... Um. Well. I was younger then... It had to be the Mini.
Posted by soubriquet at 10:42 am 1 comment: 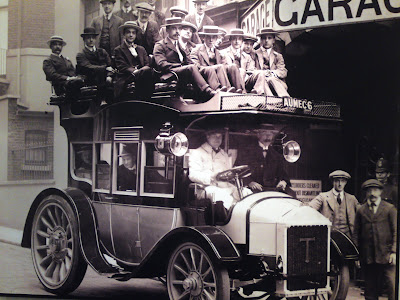 I've been away from home a few days, travelling on the most wonderful, futuristic automobile.
I only fell off about twenty-six times on the first day.
Posted by soubriquet at 9:09 am 4 comments:

A Mediaeval Woman, a Potter 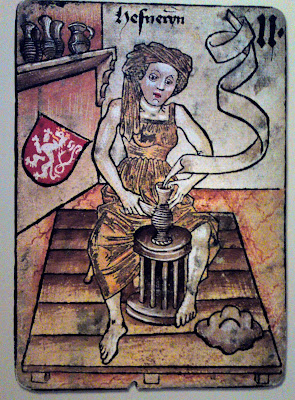 For  the many women  potters out there.
All too often, images suggest that early pottery, hand-building, was primarily a women's art, a home-making art, an art of the hearth, but along came the wheel, which was a machine, and we men do love our machines, so, once we have  a machine,  all of a sudden, men get interested in clay. The wheel-throwing of clay is seen as a historically male-dominated activity.
There's some truth in it even now, but that's a generalisation, and I've seen  it reversed many a time.
I was delighted to find this image, countering that generalisation, in the Ashmolean Museum in Oxford. On a mediaeval German playing card, the image shows an accomplished woman potter making a baluster style cup or vase, we can clearly see she's using a shaped tool, of wood or bone, (we potters call it a 'rib' to this day), to impress grooves into the side.
Look at her dress, it would not be out of place in our times, I look at her face, her posture, her arms, and I think she's very much a real person. I'm interested by the way her wheel is placed upon a wooden pallet, but beneath it is a tiled floor, suggesting, not a humble peasant's shack, but perhaps her employ in the household of a noble family, as is also suggested by the hanging shield....
The wheel is mounted upon a fixed spike, probably capped with steel, which would pass through a loose clearance-hole in the flywheel, and sit in a socket on the bottom of the wheelhead, it might have had a metal (iron or maybe bronze) cup on which to pivot. The flywheel, which she spins with her foot, hangs from the wheelhead on vertical spokes.
She's got a lump of clay ready on the floor, but I see no bowl of water, or slip, of which I think she'd need a little.
The wheel spins anticlockwise, and she's hooking it toward her with her left foot, rather than kicking it. I think the dress might be a hindrance there, snagging on the spokes, but she's hitched it up above her knee on the left there, to free the leg.
I wonder, does she dry her hands on that free end hanging down from her turban? Or is that smudge on her suspiciously wonderbra bosom a hands-worth of clay?
All of this, by the way, is my conjecture from looking at the picture, it in no way constitutes any sort of trained analysis.
Well, Ladies? Any comments?