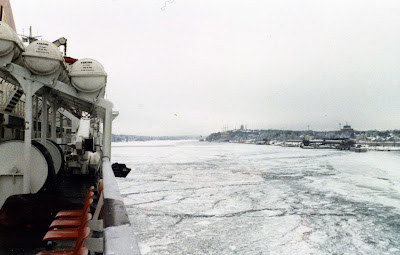 Quite a long time ago I used to live in a little town in the middle of the Baltic.
Posted by soubriquet at 5:46 pm 3 comments: 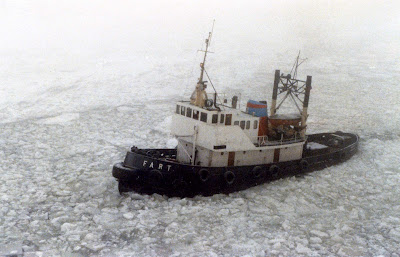 I've Been Rootling Through Old Photos 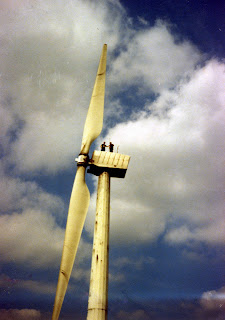 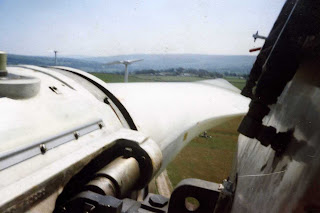 After I had to close the pottery, after working with Earth, Fire, and Water, I decided to work with Air,  and became a Wind Turbine Maintenance Engineer. It's a very responsible post, as without these things there would be no wind....
The top picture's me and my little brother, fitting a new wind-speed sensor assembly on the top of a turbine.
The dark blobs and streaks on the tower were due to  premature failure of the seals meant to hold grease in.
We had to hire a big cherrypicker to get up there with a hot pressure-washer and scrubbing brushes...
Oh, and the bearings all got replaced, needing a very big crane on site. The cherry-picker guy chickened out because we were getting pushed about so much by the wind, which cost us an extra couple of days.
Posted by soubriquet at 3:08 pm 4 comments: 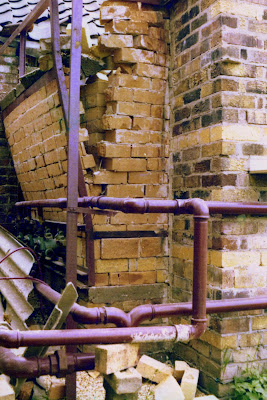 Or "Things That Go Boom in the Night"


Although I often fired that kiln, this did NOT happen on my watch! What happened here was that the kiln was started on small pilot burners, left a couple of hours, then the gas was turned on to the main burners... But three of the four pilot burners went out. And my boss didn't check, or purge the kiln atmosphere before turning on the big gas valve... so it filled with a nice mix of forced air and gas, and... bricks rained out of the sky.
This was in, ahem... 1977. yes, children, when dinosaurs roamed the earth.
I learned a few useful lessons from that. And after the kiln was rebuilt, I learned that combustion experts are not infallible, and that fire extinguishers only last a few seconds.
The gas valve guys had come and fitted new flame-failure devices to the kiln, and were testing the auto proportioning valve. They'd run the kiln up to red heat, and decided to go for lunch whilst it cooled a bit.
So without telling anybody, they popped the door, left it open about an inch. Just above the kiln door was a roof with wooden timbers.
Our clay pugging part timer went into the kiln room, let out a shriek, and yelled "We're on FIRE!", so I yelled to everyone (There were twelve workers) to get out, and call the fire brigade, whilst I heroically ran in the opposite direction, toward the fire... (see how brave I am?) (or stupid?). I grabbed the first extinguisher, aimed it at the flames and ""PHOOOOOOF! it said, and went limp. Yep. phoooooof. No foreplay so to speak, just hit the button, a white jet, and a fire extinguisher hanging limply.
What a disappointment. And the fire was still going. Oh. And the air was filled with choking, eye watering, blinding white powder.  The fire was going even better than before, right up to the apex of the roof. I ran back into the main room, grabbed the foam extinguisher, and tried that. Oooh baby.. the fire loved that, gimme some more, she panted.... but that foam extinguisher? Shppurrrtttttt! tt! tt t... And then, that was it. That fire, she was still going, crackling and banging and moaning. Your extremely brave correspondent said "Fuck it", and left the building, coughing and wheezing .
By which time heehawheehaw! the fire engine was roaring in through the gate.
It turned out, don't-cha know, that my technique was wrong.
The firemen went up the roof with axes, ripped the tiles off and blasted about a zillion gallons of water on it. Well, yes, of course, they smashed a couple of weeks' worth of production, but they saved the kiln room and the glazing room.
Just around then, a white van turned up with two gas furnace experts, who'd had a pub lunch. With beer. And missed all the excitement they'd caused. Their company's insurance faced a big claim, and I hope those two were sacked.
After that, I went on a fire training course. I've forgotten most of it now. But my technique is better.
Despite my heroism, I didn't even get a medal.

Seriously, potter-friends,  learn what to do in a fire. I know. kilns are good at NOT starting fires. But we can all be stupid at times.
Get the right extinguishers. Your local fire department will often do free training sessions. A fire extinguisher comes and goes in about fourteen seconds.