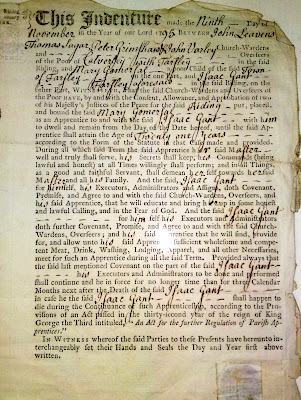 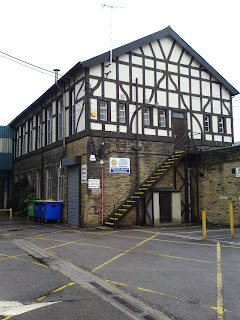 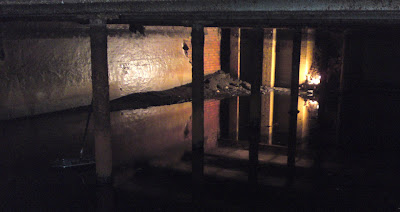 This week, and last week, I've been busy with a bit of building maintenance. We have a building, under which was rumoured to be a basement full of water. The only person who could recall having been in there was the company chairman. Apparently, in the late 1950s there were all manner of educational and hobby clubs among the company employees, and he, then in his twenties, was a member of the Archery Club. They used to practise indoors in winter in the basement.
The building was erected in the 1920s, with a water-filled reservoir beneath it which supplied fire-fighting water, and boiler cooling water, this was fed from springs on site, and also from a sixteen-inch iron pipe running from a deep-well pump at the other mill, a quarter of a mile away.
When, in the late nineteen-thirties, war in europe was expected, the reservoir was drained, tanked with asphalt, a nine-inch thick, heavily reinforced concrete slab poured above it, and it was turned into an air-raid shelter, with steps at both ends, steel blast doors, and an escape tunnel to an open area nearby. There were toilets, a kitchen, bunk-beds, a first aid station... We have all the plans in the archives.
In the late nineteen fifties, however, there were plans to install a steam-turbine power-station on site. This would generate electricity for both mills, and reduce the costs of running all the post-war electricall powered machines. So the clean-water reservoir was needed again. The stairs were taken out, the rainwater diverter pipes smashed, the drain closed, and the basement allowed to fill to a depth of about 7'6". The access hatches were concreted over.
When the turbine, known as "Eleanor" was taken out of service in the early eighties, the basement was forgotten.
Now, with the ground-floor untenanted, we decided that a structural inspection was due. I had to find the hatch, Which proved not to be easy. The measurement indicated on the plan was bogus. But after a fair bit of jackhammering we found a steel hinge, and from there, managed to cut a hole, finding the original steel ladder. 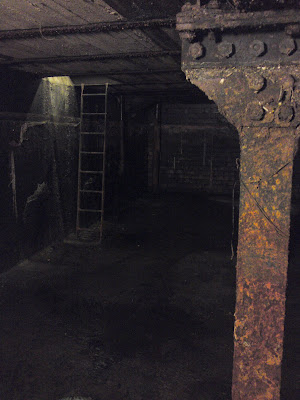 A cheap sump pump was lowered into the water, and I checked the rate of level drop. It took two days to get to within wading depth of the ladder section, then, surprise, a doorway. And three steps down. Gak. Thigh deep water. No ghost so far. Nor skeletons, or pirate treasure-chests. 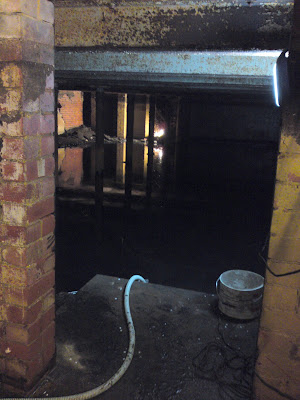 The old stairway, now filled with rubble is at the far end.
Down the pump went again, for another day, I calculated that the cheap pump, of the sort you might buy to run a waterfall in a pond,  had shifted over 480 tonnes of water.
Down in the bottom layer, however, there was a lot of black ooze, and the pump kept clogging, so we ended up with a big tanker, and three men, using it as a giant wet-vac. Yesterday, we shifted 4,500 gallons of black goop. 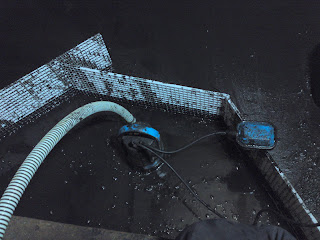 Next step was to get the structural steelwork guy in to assess the corrosion. He said it was all okay, scale off the loose stuff, wire-brush, paint with bitumen, and check every five years.
Oh, and prise out the rotten shuttering wood. It won't be me doing it. we'll contract it out, I suspect two men, maybe two weeks, in the dungeons. Then we'll let it fill again.. 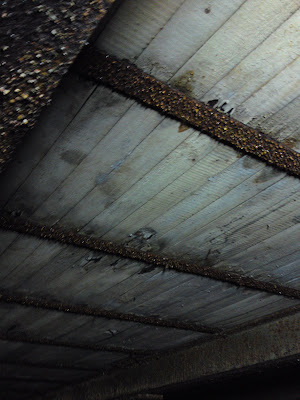