Energised by recent events and encouragements, I got my mother, voluntarily, without any duress, to agree to let me use her garage as a pottery.
This meant, of course, further clearance of assorted stuff, stuff which had been there since my mother
moved into the house about eight years ago. The sort of stuff that fills the garage of an elderly lady who has no car, but who has three sons. Well, I owed her a few jobs, there was a little tree to cut down, my brother had a load of rubble in his back yard, there were old lawn chairs... So I hired a miniskip, and on friday night, coerced my brother into helping. First, two trailer-loads of rubble, old fence panels, etc, then a load of stored stuff, kitchen units smashed flat, a gas fire, forty years worth of tupperware and cake-tins. plant pots, coolboxes, light fittings of the nastiest sort, bags of solidified cement, twenty year old paint tins, wallpaper from the previous house, carpet tiles...... Need I go on?
I cut down a bit of bench to mount a temporary wedging table. Much of the remaining stuff is mine, destined for my flat, but.... um
yes, well, I moved it nearer the door. Got the electrician to visit and work out what's required to fit a 42 amp kiln... (bought off ebay)..... Now of course, a while ago, we had lots of spare heavy cable at work, which I could have used, but our numpty labourer cut it all up into short lengths, to put in our scrap recycling bin. Yes, we do get to keep the money we get for ripped out cable and copper pipe, but I try to save re-usables, it makes a lot of sense to reuse, rather than buy new... but Peter? he looks at it and beer money signs light up in his eyes.
Now I'm searching my memory for where I might find ten metres of armoured cable, 16 mm or bigger. We ripped about half a mile of it out at the end of last year, sigh.

So. Here's the situation. I've got a 16'x8' space to play with, plus a bit about 4' square at the back. I will clear it further, and build work tables and racking, there's hot and cold water in there, because the previous owner had a washing machine. so I'll fit a sink and a settling tank for the drain outlet, by the door.
Better lighting is needed.
Now I have to look through all my pottery books and check out other people's ideas on space usage.
Added bonus? theres a little solid fuel stove in there. An antique yacht stove. It was once in the library in Wordsworth's house at Hunting Stile in Cumbria. Whether it was there when William Wordsworth sat in the library and wrote poetry, I do not know. Still, with a bit of stove-pipe, it could solve the winter heating question. 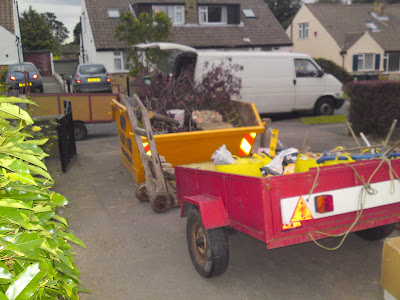 Two trailers and a skip. Ithought the skip was going to be far too large, but by today, it was two feet deeper than in these pictures. 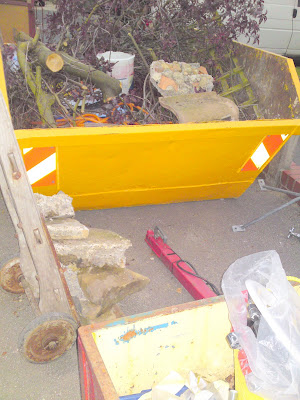 Found time to cut down a (diseased) ornamental tree and clear a load of rubble too. 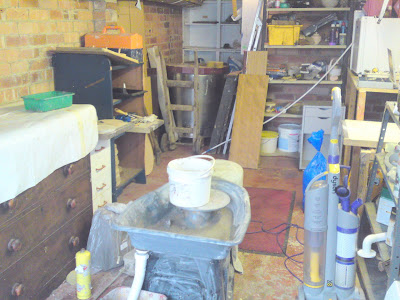 Even used the Dyson vac on the floor, and to the horror of the garage's spider poulation. -I imagine the spider-inside-a-dyson scenario to be a bit like Dorothy's experience in a Kansas tornado in The Wizard of Oz. But not with a happy ending. 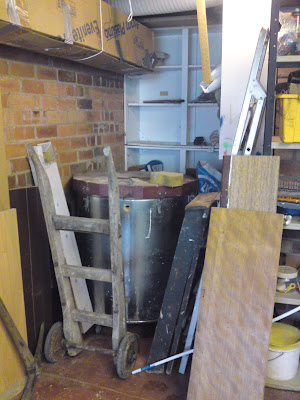 kiln corner. Kiln is on wheels, it probably won't end up living here, but I do forsee this as glaze bucket corner. 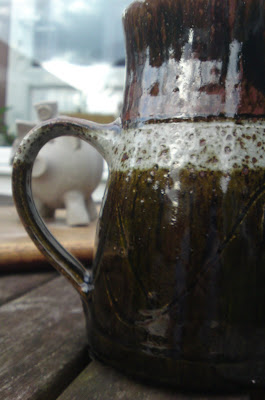 Here's one I made earlier. Found it in a box in the garage, 1985, clay sample testing. 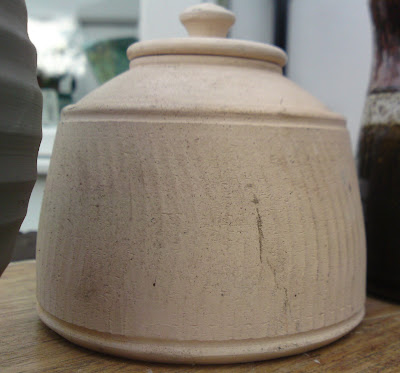 Here's another I made earlier, 1989, bisqued, and packed away since. This was a teapot body that got too dry for handle and spout, repurposed as an anything canister. 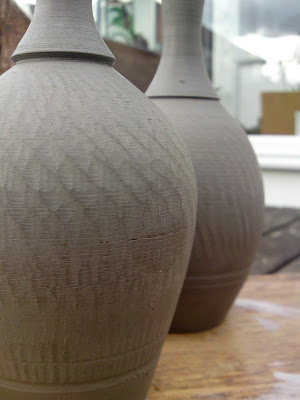 And so, to work. I find myself in an interesting situation. Parts of me have forgotten so much, yet somewhere, deeper, there's a me who knows the answers. So I am, at the same time, pupil and teacher. I've not got a clear idea of what I want to make yet, so I'm making a few things as exercises. I need to set up some kind of throwing gauge and practise making same size/same shape pieces. I need to stretch myself a bit.
And I need to work on my back and torso muscles. I do some fairly physical stuff in my working life, but those muscles a potter uses have been asleep too long. When I was a full-time potter, I was also a keen canoeist (kayaker), messing about in whitewater and sea-surf. And I swam every week. And cycled. All good for the back and torso. Arms are okay.
I refuse to go to a gym. I can't stand the boomboom music (we have a gym which is a tenant at work. Also a karate school. I avoid the place....)

Anyway, all this has been waiting to happen, and I must thank my muse for gently nudging me in the right direction. And my friends of the internet who have been supportive and said encouraging things. Feel free, please, to criticise, question, and make suggestions. In fact, feel free to point at anything, say "that's horrible", and tell me why. 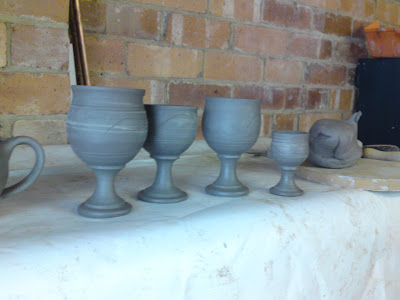 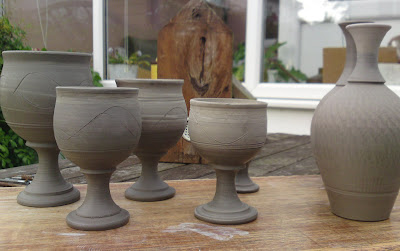 Assorted goblet/chalice forms. I like the challenge of throwing these in one piece, I think of it as a zen activity, I can only do it with my mind emptied. Just hands and clay, fingertip feedback, one clumsy move and that stem twists, the bowl flops, Blop! 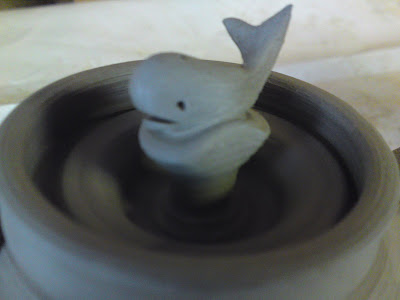 And a little one-cup teapot.With a whale... okay, I made the knob on the lid too small, so... hence the whale. Not sure what it has to do with teapots though. 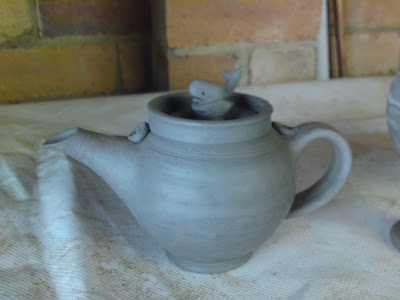 Skilled teapot appraisers will see a lot of faults. I put the spout on at too low an angle. the collar around the lid looks far too wide in proportion to the foot. The handle lacks spring, life...
Still, it's a start.

A Gross of Grocer's Apostrophe's Please 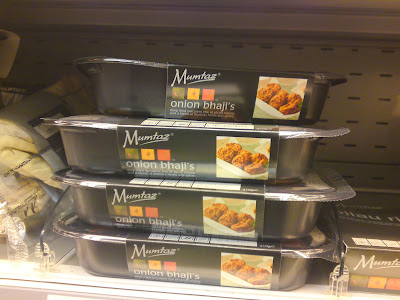 I'm sure there are people out there who think every letter 'S' should be preceded by an apostrophe.