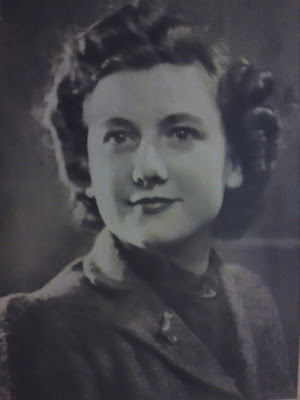 
My childhood memories all have the sound of my mother in them, singing. -I suppose I was exposed to arias for all of the nine months before I was born. She sang. As she cooked, oh the scent of baking is Puccini...as she ironed, fed a baby, she sang. It was her default position in life, sing whilst you're happy, sing when you're sad.
She'd planned a life as a singer, soprano, and then Hitler intervened and bombed her. repeatedly. her career was derailed. She'd worked, she told me, on the edge of a ragged hole, on the fourth floor of Swansea's Telephone House. Telephones were vital, in wartime, so she, her boss, and one other girl had to work, despite the bomb that had come through the roof, tearing down the ceiling, and crashing down floor after floor until it ran out of floors and stopped, fins uppermost in the basement.
Bomb disposals men were down there with it, working gingerly, trying not to set off the detonator tumblers, the timers, the vibration sensors. My  mother was tapped on the shoulder by the sergeant. "Please, miss, stop singing, you'll wake it up!"
In recent weeks, the blog's seen little of me as I was attending to more important matters.  She was diagnosed with a while back Hodgkin's Lymphoma, and the early phases of Alzheimer's. The last year or so has been difficult, the last couple of months made the last year look easy.
On wednesday, we had to travel to the hospital to see her consultant. We knew there'd be results of a biopsy. Those results were no surprise. We knew there'd be bad news. Emergency radiotherapy was planned, but she, who'd lost already the sight in her left eye, might become blind, and maybe deaf. And that was just to relieve a few symptoms, the longer term? there was no longer term; -two to three months, maybe.
She was, overall, in good spirits as my brother and I wheeled her through the hospital. She selected a cream-cake at the cafe, joking that at least she didn't need to worry about her figure any more. On the way home she was joking about having to wear an eye-patch, said we should get her a parrot for her shoulder. I suggested we saw her leg off, and replace it with a table leg.  "Sheraton, no less!" she demanded.
So the pirate was in good spirits.
Something in the medication, or perhaps that evil malignant intruder, was making her crave sweet things, cakes, and we'd had to instigate a "No cake after eight" rule, as sugar too late would keep her hyperactive and awake, and night-time was the time for falls.
I'd gone home, but my brother, temporarily living with her as a carer, heard the fridge door open, and caught her, cream-handed, sneaking an illicit piece of cake. He thought he'd hidden it well, behind a lettuce.
She laughed at him, told him it was too late, she'd eaten the evidence.
He sent her off to bed, told her he'd bring her a hot milk drink, and she went, still chuckling.
A few minutes later he tapped on her door, she said "wait a minute, I'm putting on my nightie". Minutes later he heard a bump, a faint cry for help. she was on the floor, struggling to breathe. He lifted her to the bed, her fall alarm did what it's supposed to do, and the alarm centre came on line, and called a paramedic ambulance. he called me, and I broke a few speed limits and was there in a little over five minutes. no pulse. no breath. cold hands...
Paramedics, half an hour after she stopped breathing had shocked her heart into beating, raggedly, and insisted on taking her to the hospital. She hadn't wanted that, but they would not listen. The hospital, however, couldn't bring her back. And that's it. What she wanted, to go quickly, at home.
She's spared the worsening stages, the indignities and pain that had been forecast. She was ready to go, and had made her goodbyes. For me too, it's a relief. It's been hard to see her struggle with this sickness, the chemotherapy, the loss of balance, loss of sight, loss of dignity, loss of hearing, the frustration of not being able to read, listen to music, sing.
A longer life is only of value if you're able to live it, on your own terms.
My brother and I left the hospital at after two in the morning. Then we walked. In the dark, through the woods, around the lake, walked, and walked, until the birds started to sing, until the black sky was shading to blue, the sun starting to rise, on a world, that, for the first time ever in our lives, no longer had our mother in it.
A song, gone.
.

Interesting: Man Films Japan Quake as the Ground Cracks Beneath his Feet.

He stays remarkably calm. Mind you, he's a lot likelier to be safe where he is than amongst buildings.
Most quake videos show office furniture falling over, ceilings breaking loose. This interested me far more, showing, in real-time, ground fissures opening and closing.
And liquefaction. Where apparently solid ground liquefies and flows, where water is squeezed out of the earth.
In the comments on youtube, people say "I'd have run away!" Where to, I wonder?
The quake areas are sufficiently large that running or driving is fairly irrelevant. all you can do is wait for it to end. or like this guy, observe it keenly, in a fairly detached sort of way.
Such a contrast to the usual "Gosh! Wow!" school of youtube videoist.
Posted by soubriquet at 2:31 pm 4 comments:

I suppose it could be said this is my favourite band. Maybe. I can never make my mind up about things like that.
They were a great night out, in the days when big names still played on small stages in university dining halls.  Back there in the early seventies, (the old feller muttered, grasping his walking-stick,), going to see a band meant, well, seeing them. Not being half a mile back in a sea of heads, watching the action on a sixty-foot high tv screen. And I saw Family quite a few times. On one occasion, Roger Chapman, the lead singer, passed me a bottle of his beer. well, yes, the bar was open, but he'd just chucked a tambourine into the sky in a fit of wild exuberance. Unfortunately, it smashed the glass globe of a light above me. My injuries were minor, but bled well, and I spilled my pint... It was a masterly stroke for Chappo to stop singing, peer in my direction through the bright lights, say "Are you alright? Sorry..." and then proffer a bottle of Sam Smith's Nut-Brown Ale.
Good man. Ta for that.

There's a bit of a Waltzing Matilda theme going on here, sparked by Adullamite and Relax Max's blogposts of late.
Posted by soubriquet at 6:29 pm 3 comments:

Students of this blog will know that I've posted this song before, with the backstory, Mathilde, etc.
It was more recently brought to mind by a blonde joke on Adullamite's blog, and a Waltzing Matilda word quiz on Britishspeak.
This song is NOT Waltzing Matilda, it quotes it in the chorus, but it's properly called "Tom Traubert's blues (Four Sheets to the Wind in Copenhagen)".
Tom Waits, clearly, is not everybody's cup of tea. In fact, there are a lot of people out there who'll look horrified and say "What the F****?!", but to me, he's the real thing. He puts his heart into it. He puts his all into it. Many of his songs are far better known sung by other people, Jersey Girl, for instance, a massive hit for Bruce Springsteen. But I'd say, Put away your prejudices, your snap decisions, listen to the man.

It's not mainstream, it's not ever going to be at number one.
Justin Bieber will outsell him in a heartbeat. But I know who I'd go to listen to, if he were in town. I'd throw away a free bieber ticket, and pay good money to hear Tom Waits.

Well, my loyal three and a half readers? what do you think?
Posted by soubriquet at 3:03 pm 4 comments: