Yesterday, I was listening to the radio, and it was "Womans Hour" on the BBC.
The interviewees for part of the programme were women who had worked on the recent BBC series "Frozen Planet".  Sarah Wheeler, ex writer-in-residence in Antarctica, described how, before travelling to the Mc Murdo, she'd been given a U.S. Navy Antarctic Survival Manual. One of the useful tips in there is that if you touch very cold metal with bare skin, such as an ungloved hand, then you'll stick to it, firmly. The best way to release yourself with minimal injury is to urinate over the join between self and metal.  "before going south, I did a 'dry run' so to speak, in the privacy of my own bathroom, and... y'know, it's a man's world!". 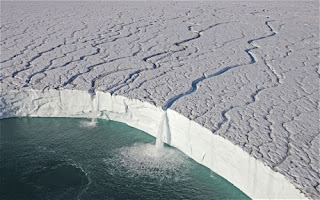 After clearing up the mess of the tea I'd snorted, I gave that a tiny bit of serious thought. And, you know, I'd suggest that if a man gets stuck to something, then he's likely to find it nearly as difficult as it might be to a woman to aim pee at the intersection. Say, for instance if it's his hand stuck to a door-handle.
Where we do score more highly, is that we're more likely to be able to direct an aimed stream of pee at a colleague's sticky problem.

(And before we all go "eeeuooo!" in disgust, for heaven's sake, grow up. Unless you've got a kidney or urinary tract infection, pee is pretty much sterile.  Safer than saliva... that kissing?  it's more dangerous!
The advice came from the U.S. Navy, which, like most military forces, advises its personnel that in the absence of sterile boiled water, peeing into a wound is a safe way to flush it clean of dirt and bacteria.) 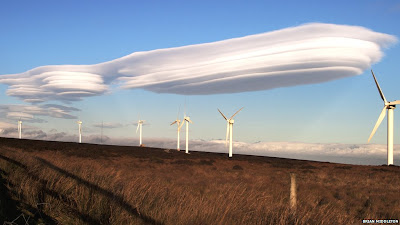 A better pic than I could get, of clouds over the windfarm at Oxenhope Moor

This one's not mine, it's off the BBC Leeds Weather Site,
where other pics of these unusual lenticular clouds can be seen. 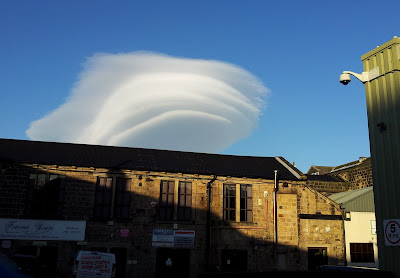 This one's taken from my place of work. 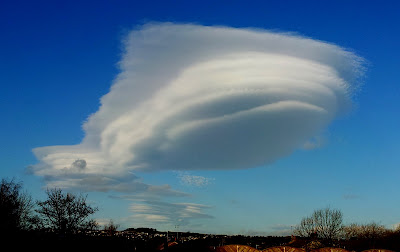 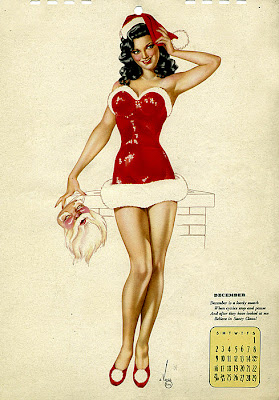 I think this style of Santa will revolutionise Christmas, the time spent dealing with firmly-wedged corpulent old men will be available for other purposes. You'll note the sinuous curves for easy negotiation of chimney bends, the self-sweeper-muff at the broadest point, and the two fur-trimmed orbs, which locate the Santa and provide balance.
The only thing that troubles me is the casual way she's holding the poor old fella's face, I wonder, did she really need to mutilate him in order to take over? Does it help with the reindeer?

I will have a trip-wire and net set up by the fireplace, so I can ask her what she did with the old man. If her answers absolve her, then I'll gladly offer her an assisted shower to get all the soot off.