Seen at Nag on the Lake , in Chicago, there's a new, huge, statue of Marilyn Monroe, in one of her most remembered scenes, with her skirt flying up as a subway train passes beneath the grating on which she stands. That white dress, not long ago, sold at auction for $5.6 million.
Of course, this pic has spawned innumerable copycats over the years. It was the iconic image of the poster for the film "Seven Year Itch" in 1955. It's said that Marilyn's then husband,  Joe Di Maggio was somewhat angry about the scene, and it may have been the last straw, because they divorced shortly after. 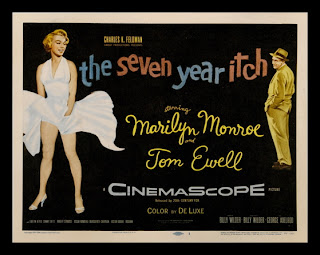 The shots were used in the posters for the movie, but the video above was NOT seen. Oh no. The censors deemed it too shocking, so the scene was re-shot, and edited so audiences saw mostly above the waist shots, and nothing above mid-thigh. That was more than racy enough for 1955 though.

Marilyn's dress antics were the talk of the town, and are again, in Chicago, where the giant sculpture by Seward Johnson has not been universally appreciated. It seems some of the good folk of Chicago are embarrassed by Ms Monroe's bronze undercladding. It's caused something of a furore there. Not with everybody of course. Teenage boys are universally in favour of it, -and not just the boys.
Mind you, her nether regions are clad in Bridget Jones' granny panties. For which the residents of Chicago must be universally grateful, as opposed to the dental-floss netherwear of a modern equivalent. 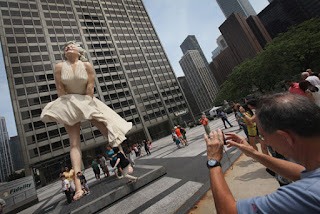 Girls? Whatever are you all thinking? 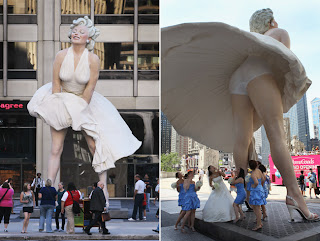 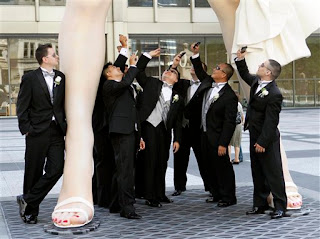 Every woman needs a little man, -this guy's about nine inches tall, he does pedicures, touches up the toe-nails, and sleeps in your make-up bag, ready for emergency repairs and fine detail work. 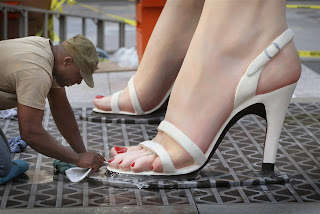 And here's the guy who knows the truth. Yes, it seems as though not all of the wind's from the subway. He's wearing a mask... Marilyn? Go easy on the cabbage please? 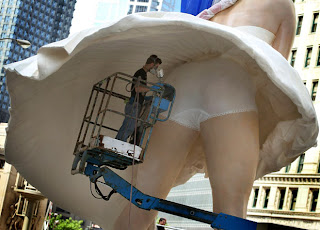