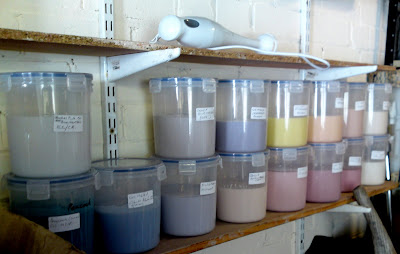 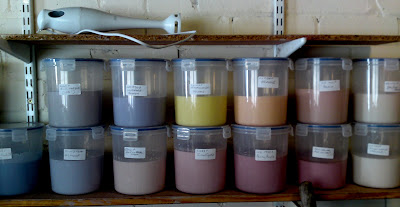 ...A whole stack of doll's-house sized glaze batches today. Now the last time I tried mixing one of these 1Kg, 2.2lb bags of glaze powder, it drove me mad, trying to get a smooth mix, push it through an eighty-mesh sieve, clean multiple containers, I even resorted to pestle and mortar to scrunch the lumpy bits...
Then, wandering through the large supermarket, (where I bought all those snap-top containers)... I saw a little hand-blender. How much? £4:50? ($6.86), so I thought... give it a try. When I got to the checkout, the girl said, "Keep the till receipt, it's your guarantee!"
Ha!, little did she know just how far away from milky drinks my plans were. I can report it does an excellent job.
As you can see, I was not too scientific about water amounts, I'll adjust the thicknesses later. I'm still amazed what a totally smooth lump-free mix the thing does. I wish they'd existed back in my college days! It did get a bit hot, but hey, it's under guarantee. I wonder how many I'll get replaced in the coming year? 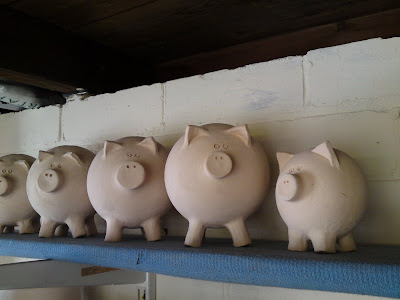 Next question is what colour to glaze each item in. And so far, I've not settled on a chosen clay body, and I've made NO test tiles.
I used to make stacks of the damn things, some would go on a board on the wall as a quick reference, others would be tied to glaze buckets and bins as clear identifiers, given that one batch of gloop often looks exactly like another, in wet form...
I used to have a matt turquoise/blue/green/purple glaze, I remember it had a heap of barium carbonate, and copper carbonate, I think the purple might have had manganese, but... disaster. somewhere there's a dog-eared notebook, with every glaze I ever mixed, and I can't find it. I really don't think I could have ever knowingly thrown it away, but there have been a couple of chaotic periods in my life in between, with house moves and an interim period of posessions scattered all over the place, boxes, bags, basements, attics... I may never see it again.
The glaze recipe was given to me by a potter who died a couple of years back. It may take quite a while to reinvent it. It was such an electric colour, so bright, verdigris, lapis-lazuli, such a beauty. 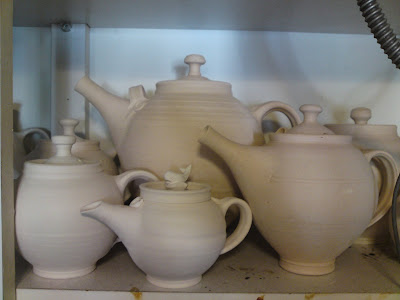