The Pope and the Falklands.

Pope Francis, it is reported, shares his Argentinian President's belief that the Falkland Islands, a British Overseas Territory, should belong to Argentina.

Last week, there  was a referendum on the islands to find out what was the will of the people in terms of future sovereignty. This was closely monitored by a team of international observers.
Here are the results.

On Monday 11th March 2013, Keith Padgett, Chief Referendum Officer gave notice that the result of the referendum on the Political Status of the Falkland Islands are as follows:
The number of ballot papers issued was 1,522
The number of votes cast at the referendum was 1,518
The total number of rejected ballot papers was 1
The total number of votes validly cast at the referendum was 1,517
The percentage of turnout at the referendum was 92%
The number of “Yes” votes cast was 1,513 (99.8%)
The number of “No” votes cast was 3 (0.2%)
1 vote was unaccounted for
The international observation mission’s preliminary findings were released after the official announcement of the vote result.  Full statement is available to download in English and in Spanish here.
“It is our finding that the Falkland Islands referendum process was free and fair, reflecting the democratic will of the voters of the Falkland Islands,” said Brad Smith, the Head of the International Observation Mission. “The international observation mission has concluded that the voting process was executed in accordance with international standards and local laws. The process was technically sound, with a systematic adherence to established voting procedures.”


Clear enough, wouldn't you say. Some of those voters are in the ninth generation of families to have lived there.
Argentina's president dismisses it as 'irrelevant'.
She claims the islanders are 'squatters' on land which naturally must be Argentinian territory, because... well, just because.

Here's a timeline, via Wikipedia , showing who, and for how long, has historically held the islands.


So  it seems several others could proffer a claim too. Including the U.S.
The people there speak English, and their houses, their roads, their world owes nothing to Argentina.
If we are to talk of the tyranny of colonialism, which President Kircher brings up, well maybe we might ask her to explain why the population of the country she represents speaks spanish as its main language?
And we might ask her  how the native Fuegian and Patagonian tribes fared under the colonisation of her forbears? How they were hunted and slaughtered by the colonial Argentinians of european  origin.
It seems to me that the people of the islands should be heard, and supported by the world. And that any nation who talks of 'Democracy' as an ideal, should stand by them.
(Next Week:  Canada invades St Pierre and Miquelon, after finding a tiny French colonial outpost only a few miles off the southern edge of Newfoundland. )
Posted by soubriquet at 6:47 pm 8 comments: 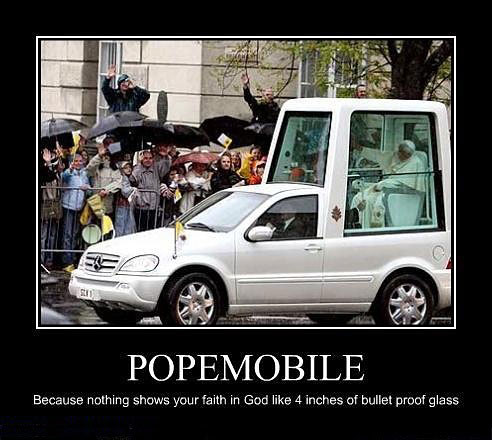 Yes, I know... It's an old pope, one or other of them.
The point made remains relevant.

There's a time in a kid's life when dance is natural. Whatever happened to mine passed suddenly, and I thus have all the dancing ability of a block of stone. Two left feet. Disconcertingly unco-ordinated.

My best friend, when I was a kid, was sent by his parents to dance classes. I ridiculed him, unfairly, because by then, young teenage years, it seemed to me that dancing was a neat way to get a grappling hold on the mysterious, and largely unapproachable opposite sex. In truth, I was a bit jealous.

Whether wibbling about to contemporary pop, or those ballroom dancers I saw on T.V.,  or Fred Astaire and Ginger Rogers, the whole thing was a mystery, into which other people were initiated, but somehow, I was held in ignorance.

Luckily for me, my lack of prowess in this particular field is not usually a problem. The Red-Dirt Girl is not big on dancing either.
What pisses me off no end is when someone at a party, who has had a bit too much to drink, insists I dance with them, and won't take no for an answer.

The expression "Dancing is a vertical expression of a horizontal desire" has been attributed to Robert Frost, Oscar Wilde, ...... And George Bernard Shaw.
There seems to be no evidence whatsoever to back up the claim for either Frost or Wilde, and the only printed evidence for Shaw was in an article written twelve years after his death, but it was actually thus:
Google Books The Oxford Dictionary of Quotations
By Elizabeth M. Knowles
New York, NY: Oxford University Press
1999
Pg. 709 (George Bernard Shaw):
[Dancing is] a perpendicular expression of a horizontal desire.
in New Statesman 23 March 1962
Posted by soubriquet at 4:24 pm 3 comments:

Some Images from My Working Week.

There's no real need for  an accompanying text, I was just going through my pics, taken as part of my working life, I use the phone-cam as a handy memory aid as I work, saves me innumerable notebook pages. Sometimes, I think the places I work are a computer-gamer's dream world. I expect space-suited explorers of the abandoned facility to leap out at any moment, brandishing the Super Plasma Cannon that they picked up on level 8. 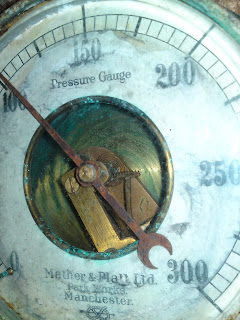 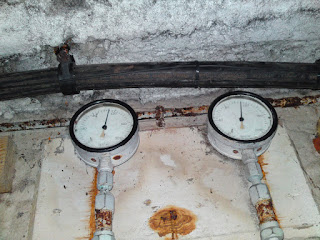 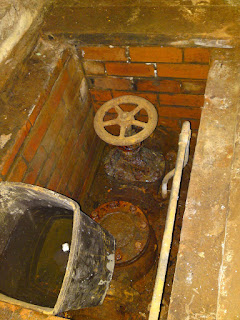 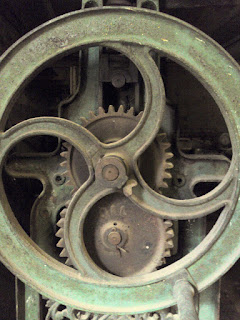 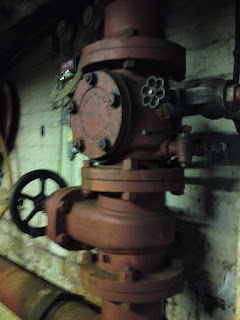 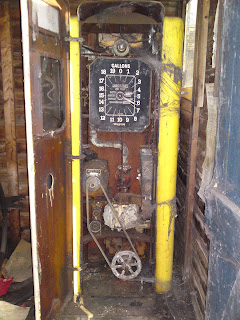 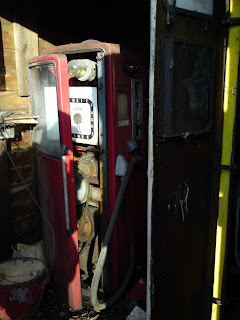 Vintage fuel beneath this, I'm sure.
My 1962 Landrover drools for a hit of the old stuff as we pass by. 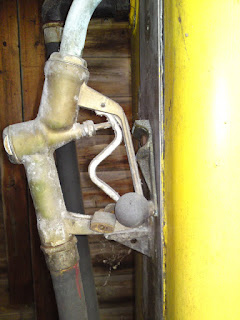 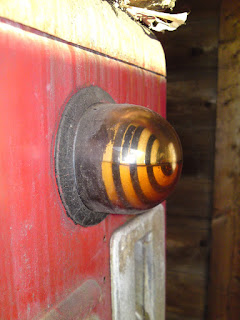 Mmmm... still got some in, none of that bio-ethanol nonsense in there, it's all old-school carcinogens, and tetraethyl lead additives.

In what feels like a spectacular act of betrayal, I sold my wheel on Ebay. Just pause for a while, as I sob uncontrollably.
That wheel has travelled with me to foreign lands, it's turned tons of clay into pots that are in at least thirty-two different countries, it's entertained children, educated, demonstrated, and helped me earn my living. And, in all the time since I bought it in 1980, its never once failed me, never once broken down. I've looked after it, greased its bearings, adjusted its drive belt, but never once has it failed to do its job. Yes, I kinda bent the tray, whilst using a gas torch to stiffen a very big pot, but I've lumped it in and out of cars, trailers, trucks, trains, ships, and up and down stairs, we've demonstrated in museums, mediaeval halls, schools, town squares, castles, everywhere.
Heads of State,  tourists by the million, and secret-policemen have watched me and my wheel working together. 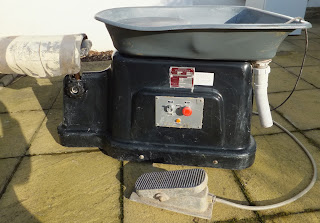 Why  sell it, then? Well, I'm moving, as many of my readers know, from the north of England to Texas.
"Can't you take it with you?", you ask. Well, yes, I could. But my wheel runs on a 230 volt AC supply alternating at 50 cycles/sec. And the U.S. power supply is fundamentally different. Yes, you can get 240v, but it's a completely different ballgame. U.S. 240v is from two opposing phases, unlike the european phase/neutral. And the clincher is that the alternation is not at fifty, but sixty cycles per second. I could get a step-up transformer, and feed it through that for the voltage, but the frequency would not work well with the electronics of the speed-control box.
Or so says a professor who specialises in speed control of electric motors. 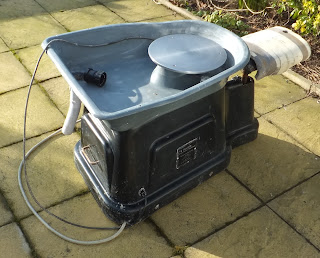 The buyer is an enthusiastic potter, just starting out. He and a friend are planning to learn throwing, they're both hand-building at the moment,  but, chatting with him, I felt it was going to a good home. I chucked in a couple of bags of White St Thomas' Body (a stoneware clay), to get them started. 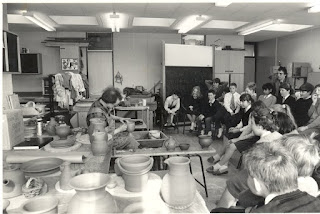 Back in the eighties, art residency in a school, funded by the Arts Council. A display, a demo, then project work with small groups of children. I wonder if any of these, adults now, parents, probably, remember any of it? I had a heap of roman pots that I handed around for them to touch, and hold, then I made facsimiles of each one, but the fun part was the kids challenging me to make odd things. A Caterpillar! A Car! A Bucket! A Princess! 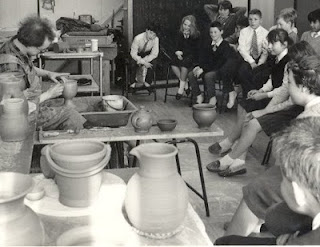 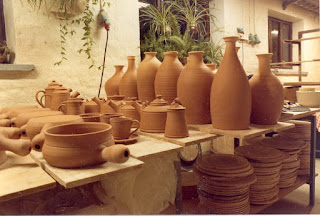 Products of the wheel, on tour in Finland. 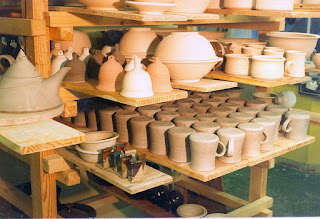 In my workshop in England 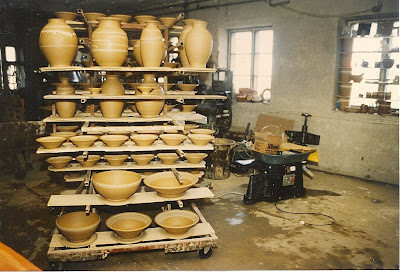 The wheel, resting, after a busy day in southern Finland, throwing clay dug from the fields behind the pottery, the floor's been mopped, It's time to go home on my bike, across the little bridge over the stream, above the micro-turbine hydro-electric station that powers the village. A mile or so uphill, to my home in an old wooden house, then a stroll down through the woods to the lake, and a leisurely paddle in my kayak.....

On arriving in Texas, I'll start looking for a new wheel. Potter-friends, your advice and preferences and warnings would be greatly appreciated. I want smooth creamy torque at low speeds, no lumpy acceleration, and fairly quiet would be a bonus. I'm wondering about the Shimpo VL Whisper?

I use water, I'm a messy thrower, so I like a big wheel tray to catch glop and trimmings, but that's something I think I can get around. I've used the old cone-drive shimpos, with their little trays, they're okay, but I don't like that fixed pedal, I'd get foot cramp after a few hours, I like a pedal I can shift about, lift  up, whatever.

I just moved house.
Well, to be exact, I moved back into my place after two years of house-sitting my mother's much nicer little house a couple of miles away. We, my brothers, sister, and I, were trying to sell it, and I was living there in much nicer leafy suburbs than my own. Last weekend, we finally did the move-out, it's sold, furniture and things apportioned, sales at auction, which brings me around to my subject, Stuff. Things. Kipple.
The debris of a life.

As you may recall, I blogged some old family photographs. In the same closet were the boxes of my dad's stamps. He started collecting stamps when he started work, in a business which exported all over the world, and by the time I was eight or nine years old, I had a stamp album, a Stanley Gibbons catalogue, a lot of little tissue paper stamp-hinges, and a fascination for these little coloured patches of paper, these world travellers from far-off places and times. 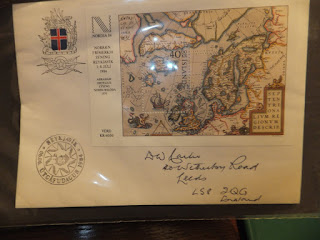 A stamp-collection is a poor-man's art gallery. 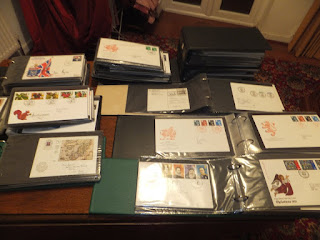 My father collected for over seventy years. 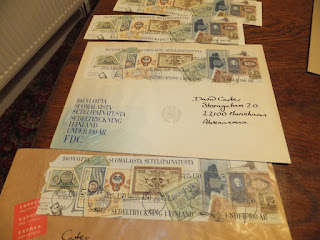 I bought stamps for him, on my travels. 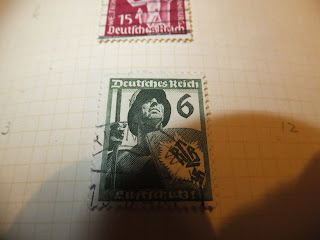 History on the pages. 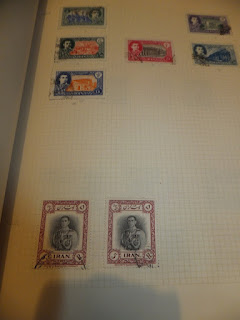 The Shah of Persia 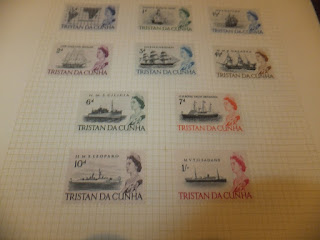 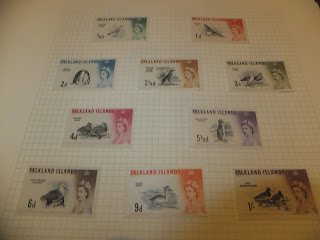 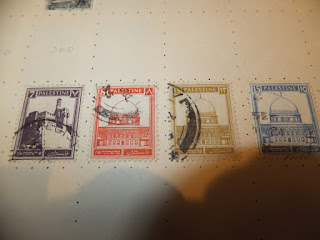 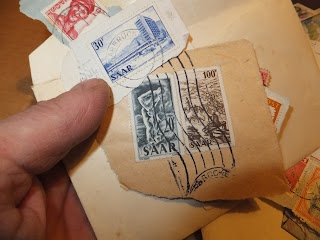 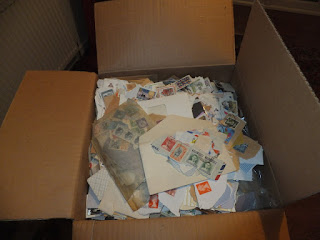 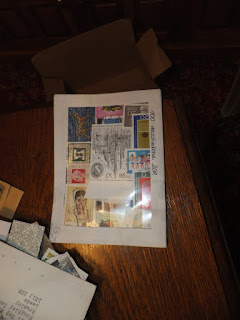 
And so, about seven boxes of stamps, albums, first-day covers went out to the auction valuers, and we're told they might bring in a hundred and twenty pounds. Pah! For that I'll have them back, frame a few. I value them, personally, at more than that.
But here I am, in the midst of trying to downsize my possessions to start a new life in another country, and I'm getting bogged down by stamps.