We all have them at some time in our lives. I sent the Red Dirt Girl a pic of a bumper sticker I saw..

It read "Sometimes I Wrestle with my Demons, Sometimes We Just Snuggle".

I know she's wrestled with hers, I've wrestled with mine. For all of us, the things in life we might define as our demons are different. Our demons may be people, behaviour, drugs, alcohol, self harm, even our very selves.
But the bumper sticker made me laugh. Because, in every conflict, I'm sure there's a moment when both sides think "Does it really need to be this way? Do we really have to fight?"
Like the christmas truce in world war 1, when the men of opposing trenches climbed out onto the frozen waste of no-mans-land, shared their christmas fare, kicked a football about in a makeshift game, until their officers shouted them back into a properly approved stance of murderous hate.

When I was a kid, my primary school was a place where kids fought, there was a ritual to it, to establish the pecking order. Bigger boys would set it up, and you'd be surrounded by a ring of kids, facing someone you had no grudge against and ordered to fight. It's a microcosm of world politics. Amazing, really that I didn't end up in the army, prepared to fight whoever I was pointed at.

I was never an aggressive kid. I didn't want to be there, fighting. However, if you showed weakness, then the mob would descend, you were prey. So I fought. And my method owed nothing to decency and the Marquis of Queensbury's rules of fair play. I soon realised, as a skinny kid with asthma and no muscles, that any sort of sustained bout would be disaster. That my modus operandi would be overwhelming and devastating force, no restraint whatsoever, and... the pre-emptive strike.
So, if you had the misfortune to be pitted against me, then while the big guys were telling us the rules, you'd suddenly get my elbow smashed in your face, my knee in your nuts, and I'd be trying to gouge your eyes out. And bigger kids would be pulling us apart, trying to limit the damage before a teacher came running.
I didn't want to fight. I'd apologise afterwards, try to make amends. After only a few bouts like that, kids were backing off, conceding defeat without bloodshed. Bigger kids, of course, weren't going to show they were afraid. I still got beaten up by groups of bullies, but I developed a reputation for always getting revenge, preferably in some way that would leave you a laughing stock.
One day I carefully dismantled the desk and chair of my arch-nemesis. Then I reassembled it, with matchsticks and rolled-up paper where the screws should be. That was over lunchtime. I was supposed to be in the library, but I snuck out.
We lined up outside our classroom, waiting for Mr Nyman, and filed in obediently on his order. When Rod went to sit at his desk it collapsed in a heap with him on the floor in a pile of chair components. The laughter was so loud the teacher next door came to see what was going on.
Yeah. I got beaten up again for that one.
Then I put itchy powder all over his sports kit.

Anyway, I'm wandering off-topic. Point is, I didn't want to be constantly in conflict. I just wanted them to leave me alone, which is what happened, eventually. They just gave up on me and left me to my books and my non-interest in sports. 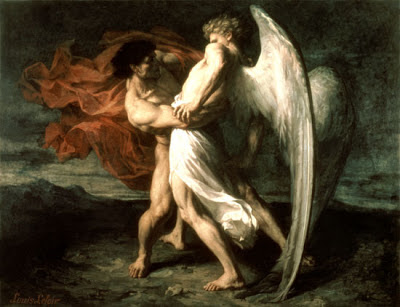 I have no enemies, so far as I know. No demons.If one came, I'd like to think I could say, "Hello Demon, I've got no reason to fight with you, nor you with me, can we just sit down and talk it over ?"

Let go the grudges, agree to walk away, just as I wanted to all those years back, surrounded by a feral gang of demons, all under  the age of ten. Offer your demons chocolate, get them laughing, show them there's no need for the fight. Be Gandhi.

It was strange glue that held us together
While we both came apart at the seams
She said, 'Your place or mine
While we've still got the time'
So I played along with her schemes

When faced with my demons,
I clothe them and feed them
And I smile, yes I smile as they're taking me over
And if I cannot sleep for the secrets I keep
It's the price I'm willing to meet
The end of the night never comes too quickly for me

When faced with my demons,
I clothe them and feed them
And I'll smile, yes I'll smile as they're taking me over
And if I cannot sleep for the secrets I keep
It's the prize I'm willing to steal
Oh, the end of the night never comes too quickly for me