Matt, here's some you'd like: These date from the time when I was making repros for an archaeologicist, museums, and for re-enactment groups. 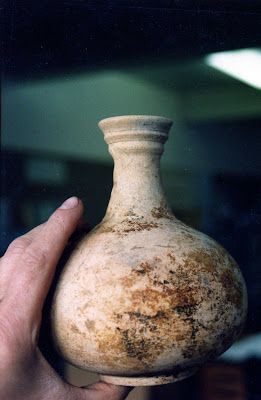 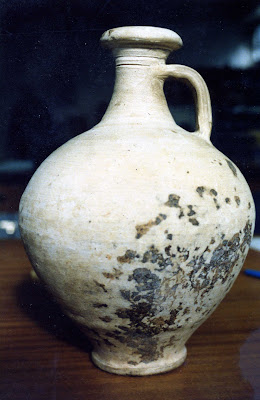 Roman Bottle, unglazed. A real beauty, I didn't want to give it back. 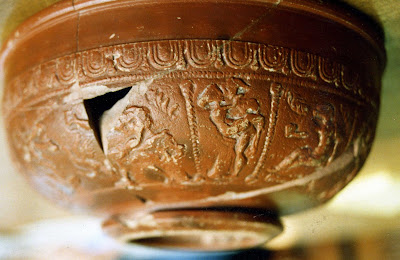 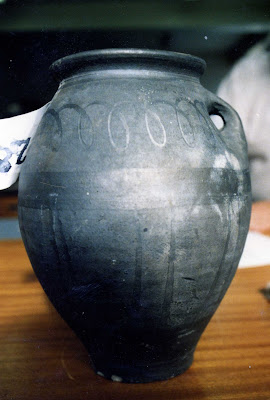 Bronze Age pot. Burnished decoration, the 'handle' is made by pinching through the side of the pot, and adding fresh clay. I suspect it's for attaching a cord. The museum's store had at least twenty of these, uncracked, looking as if they could have been made just last week.

"Once out of nature I shall never take
My bodily form from any natural thing,
But such a form as Grecian goldsmiths make
Of hammered gold and gold enamelling
To keep a drowsy Emperor awake;
Or set upon a golden bough to sing
To lords and ladies of Byzantium
Of what is past, or passing, or to come." 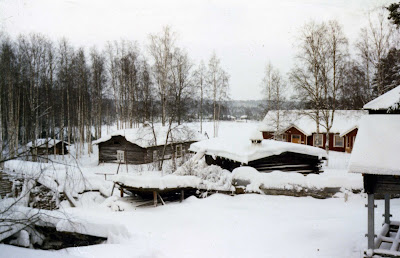 The view out my window, december 1981. The red-painted building is the pottery I was working at. 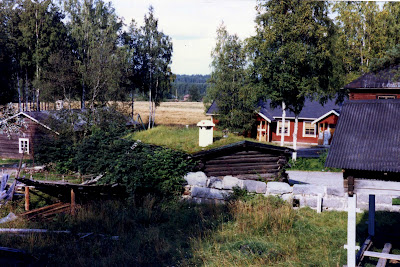 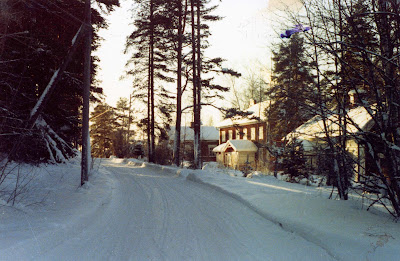 A year later, dec '82, I was living in the second house along, I grew tomatoes in that porch, in the summer. 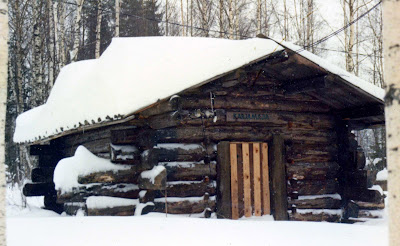 A Cabin, near the pottery.
Posted by soubriquet at 5:42 pm 1 comment:

Dylan Thomas, an extract from "A Child's Christmas in Wales"

From "A Child's Christmas in Wales "
"Years and years ago, when I was a boy, when there were wolves in Wales, and birds the color of red-flannel petticoats whisked past the harp-shaped hills, when we sang and wallowed all night and day in caves that smelt like Sunday afternoons in damp front farmhouse parlors, and we chased, with the jawbones of deacons, the English and the bears, before the motor car, before the wheel, before the duchess-faced horse, when we rode the daft and happy hills bareback, it snowed and it snowed. But here a small boy says: "It snowed last year, too. I made a snowman and my brother knocked it down and I knocked my brother down and then we had tea."

"But that was not the same snow," I say. "Our snow was not only shaken from white wash buckets down the sky, it came shawling out of the ground and swam and drifted out of the arms and hands and bodies of the trees; snow grew overnight on the roofs of the houses like a pure and grandfather moss, minutely -ivied the walls and settled on the postman, opening the gate, like a dumb, numb thunder-storm of white, torn Christmas cards.

"Were there postmen then, too?"
"With sprinkling eyes and wind-cherried noses, on spread, frozen feet they crunched up to the doors and mittened on them manfully. But all that the children could hear was a ringing of bells."
"You mean that the postman went rat-a-tat-tat and the doors rang?"
"I mean that the bells the children could hear were inside them."
"I only hear thunder sometimes, never bells."
"There were church bells, too."
"Inside them?"
"No, no, no, in the bat-black, snow-white belfries, tugged by bishops and storks. And they rang their tidings over the bandaged town, over the frozen foam of the powder and ice-cream hills, over the crackling sea. It seemed that all the churches boomed for joy under my window; and the weathercocks crew for Christmas, on our fence."

Dylan Thomas: My mother knew him, back in Swansea, in the nineteen thirties, he was one of her brother's friends. Her brother, Leonard wrote poems too, declaimed in greek and latin.. my mother, significantly younger, did not like Dylan Thomas, didn't like the way he leered at her... She would cross the road to avoid him. Said he was usually drunk, she'd hear Len and Dylan coming up the road, after a few beers, reciting poems in sonorous voice. Dylan Thomas, she says, was "Pompous".
Posted by soubriquet at 5:14 pm 1 comment: