I have to go change my petrol tank (gas to you, though gas is gaseous, and gasoline is not...), so I'll...(what? oh yes. gasoline/petroleum... the mix that approximates what we use in our car engines is a petroleum distillate, which was, once upon a time, sold, in Britain, as clean-burning lamp-oil.......).
We Brits call it petrol, Americans call it gasoline. So far as I can determine, after etymological searches, the most likely origin for gasoline is not in the U.S., but over here. It seems that back in the 1860s, John Cassell, publisher, and Coffee-house magnate of London, having seen the  newly discovered petroleum wells in Pennsylvania, became also a purveyor of clean-burning lamp oils, ( the internal combustion engine was yet to be invented), and sold a petroleum distillate with his invented trade-name, 'Cazeline'.  He first advertised it in the Times, in 1862, which was the first recorded instance of the word.


"The petroleum oil is sent from America in a crude state, just as it pours out of the earth. The business of refining and preparing it for use is extensively carried on in England and France. The London Hydrocarbon Oil Company, in their manufacturing establishment at Southall, apply to the American oil a patent process of distillation, by which the pure transparent liquid known as cazeline, giving, a most beautiful light, is disengaged from the grosser elements of the petroleum, as well as from the spirituous part, which yields an explosive gas. The latter substance is largely employed instead of turpentine for various manufacturing purposes, while the cazeline is burned, without the slightest danger, in the lamps on our drawing-room tables, free from smoke and smell. Nor are these the only uses of the petroleum oil. Experiments have lately been made, by order of the French Government, to test its value as fuel for the engines of their steam navy. It has been proved that a given quantity of this substance will generate, in half the time, as much steam as could be produced by burning twice the weight of coal. It seems likely that the introduction of this portable fuel will have a great effect upon the development of steam navigation. The Southall works alone can refine fifty thousand barrels yearly."
("The Petroleum Oil-Fields at Franklin, Pennsylvania" The Illustrated London News,
July 23, 1864)
Cassell's  business thrived, but soon the company noticed a falling of sales in Ireland. On investigation, they found that a shopkeeper in Dublin, Samuel Boyd, was selling counterfeit Cazeline and wrote to him demanding that he stop infringing their registered trade name. Boyd, rather than respond, or cease trading, simply went through all his stock with a pen, altering the first letter to a 'G'.  He was, he claimed, no longer selling Cazeline, his stock was 'Gazeline'.
"Cassell v. Boyd was heard by the Master of the Rolls in Dublin in 1865. Boyd claimed he had coined gazeline himself in 1862, from the French word gasogène (which is a device for producing fizzy water), and ordered his own labels. But, he said, the labels had been misprinted. The coincidence of Boyd’s printers producing in error the name of the market leader was more than the judge could believe and he ruled for Cassell.
Yet cazeline did not endure. Its latest mention so far found is from 1920. It was gazeline (or gasoline) which flourished."
"Gasolene was first used in an advert in the British newspaper, the Hampshire Telegraph & Sussex Chronicle in 1863. The first use of gasoline to be found in America is in an 1864 Act of Congress which declared a tax on the oil." (Oxford Dictionaries' Blog)

The new tank is not as well or as heavily made as the originals. The original tanks were made of an anti-corrosion coated steel, looks as though it was tinned all over. The new ones are just painted. I doubt they'll last fifty years.
That's the sort of thing that keeps me from being too idle at the weekends. I drilled the rear cross-member to fit a quick-release tow-hitch/recovery-hook assembly, too.
Posted by soubriquet at 6:23 pm 5 comments:

I've been a bit busy. 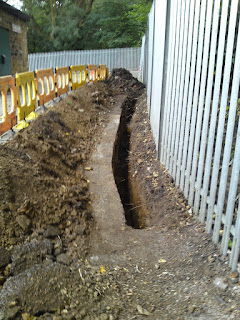 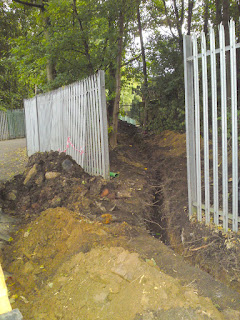 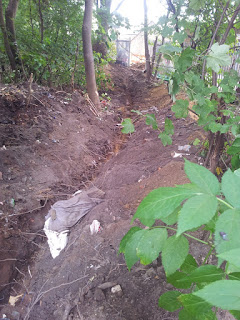 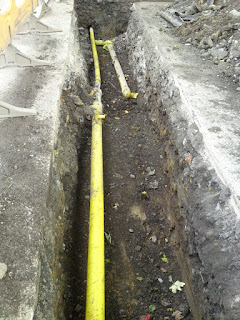 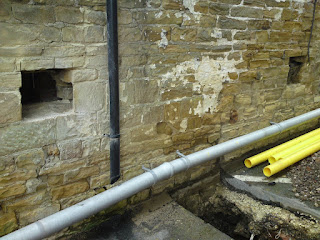 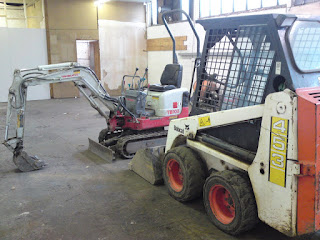 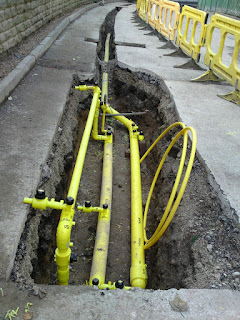 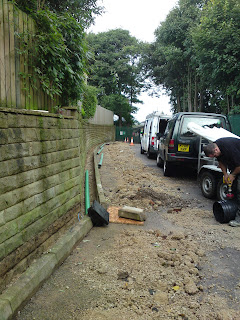 It's been a bit chaotic. Diggity diggitty dig, pipes, conduits, cables, draw ropes, lamp posts to raise, bash holes in 150 year old walls, uncover all sorts of mysteries, go home filthy, collapse and fall asleep.
And repeat. There's more, inside the buildings, new 3" gas pipes to run, new incoming mains cabling, new fibre-optic data cabling. Meanwhile the fire-sprinkler system air-compressor thew a fit and burned out its switchgear and fuses, so that's to do in the morning,  and the cctv cameras on one wall need to be moved for the bricklayer to put up a new fascia wall...
And tomorrow, there's a forecast of storms and torrential rain. Luckily, we're mostly out of the trenches now, but I don't much look forward to putting up aluminium scaffold towers around the lamp-posts and working up-top if there's lightning. Hey ho. I'll wear my rubber boots.

Posted by soubriquet at 4:58 pm No comments: