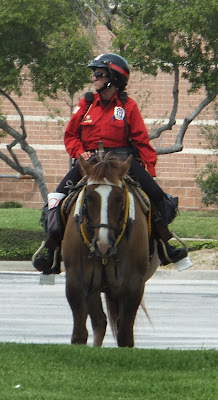 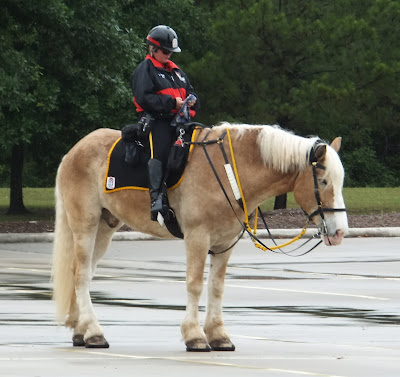 The Woodlands, Texas, is not misnamed at all. It's a largely invisible city,you can drive from end to end of it pretty much unaware of any buildings. Everything is screened and blanketed by trees. Running, cycling and walking paths criss-cross it, residential neighbourhoods are small enclaves, yet not physically far from village malls. Yes, I know, village/mall= oxymoron to we brits, but over there, in a city that started a few heartbeats ago, it's not so strange.
As in most of america, there are a confusing number of different law-enforcement departments. I've never understood it and probably never will. Sheriffs departments, police  Mounties?

Around and about, you see these guys, the mounted police, they clip-clop through the mall car-parks, they roam the jogger-tracks. I like them. I like the fact that they're out there, cop and horse, not cop in a tin box.
One of them stopped me, as I was wandering from the Woodlands Mall toward the area of fantasy housing neat Lake Woodlands. Where was I going? There was an initial touch of suspicion, possibly by the fact that I'd stopped at the roadside and clearly tossed a mental coin as to direction.  A true Texan would of course be in a car. Or a huge truck.
But as soon as he heard my accent, he smiled and became my pal.
Update : They're not actually Police, they're a private mounted security company, Alpha and Omega.

Because?
Mad Dogs and Englishmen

"Coward wrote the song while driving from Hanoi to Saigon "without pen, paper, or piano". "I wrestled in my mind with the complicated rhythms and rhymes of the song until finally it was complete, without even the aid of pencil and paper. I sang it triumphantly and unaccompanied to my travelling companion on the verandah of a small jungle guest house. Not only Jeffrey , but the gecko lizards and the tree frogs gave every vocal indication of enthusiasm"."
Posted by soubriquet at 10:43 am 3 comments: 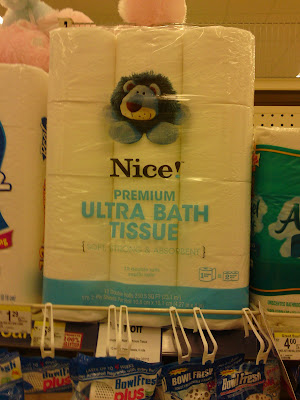 This stuff is deeply flawed. When I tore off a few sheets to wash with, in the bath, the moment they got wet, they collapsed into pulp. And then, when I emptied the bath, they blocked the plughole.

If I see a sign that says "engine-room", I know there's likely to be an engine in there. Or that a "store-room" will be used for stores. But I can fairly well assume, in America, that most bath-rooms don't have baths. Unless that low thing, with a seat and a pool of cold water is a foot-bath.

It's not just America: here in Britain, though to a lesser extent you'll find euphemisms in denial of excretory functions. Especially where it concerns facilities for the ladies, they'll retire to the "powder-room" (powder-rooms, historically, supplied bags of gunpowder for loading cannons).... no, well powder-room's a bit archaic, most likely to be found in old hotels which are firmly stuck in the nineteen-fifties. Women still do say "I'm just going to powder my nose." men might say " "I'm just going to see a man about a dog"....
Cloak-rooms.. Who do you know who wears a cloak these days? How many superheroes are likely to need to pee in your local hotel? Whereas, in some countries, Finland, I know for sure, there's no shame whatever in saying you're just going for a shit and will be back shortly.  And why should there be? We all do it, every day, so why, oh why, is there such a conspiracy in our world, to pretend we don't. Ever. 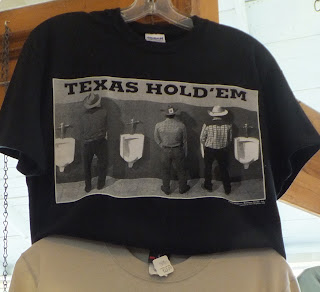