A Grand Day Out

The title, of course, was the title of the first Wallace and Gromit movie, in which they built a rocket to go to the moon and harvest cheese.


Wallace & Gromit, In A Grand Day Out

It's a curiously british animation, and I love it. Nick Park, who created Wallace and Gromit went on to make feature-length movies of them. I know at least one American citizen who loves the genre, especiallt the same studio's 'Shaun the Sheep', but I do wonder how well the very british, (and even more specific, northern british, Lancashire and Yorkshire) references translate?

But my title was not really about an animated set of Plasticine characters. I had a grand day out. Often, by the weekend, I've got a heap of chores awaiting, and I'm so diligent at avoiding them, that I feel all oppressed, and spend so much effort on procrastinating that I get nothing done whatsoever. The last couple of weekends have been much busier.... Last week I was getting muddy in Wales, the week before I was at an off-road show in Harrogate, and today? Today I went out and headed east. I wanted to buy a couple of a specific type of rope-cleat, and I thought I'd get what I wanted at a yacht chandlery, but the first place I went to had none, nor the second, nor the... And eventually, I'd got about as far east as I could get in Yorkshire, without falling off.
I'd got to Hull, which is a city which doesn't really exist. Well, semantically. Everybody calls it Hull, the ferries across the North sea dock in Hull, Hull, Hull, Hull. But actually, there's no such place. There's a river Hull. And long ago, where the river Hull meets the Humber estuary, a town grew, Kingston, the King's Town, the king's town on the Hull.
So really it's Kingston on Hull, but nobody calls it that. Ask anybody to direct you to Kingston, in Yorkshire, and they'll frown, flummoxed. Say "Oh. Sorry, I meant 'Hull', and the frown will go and you'll be directed to the M62 motorway, and told to head east until the road ends. Well, that too's a confusion, it really ends a bit short of Hull, but a road with different numbers ensues, which takes you into the city.
And there I ended up, headed for the Hull Marina, I figured that there were a lot of sailing boats of assorted sizes in there, so there must be a decent size chandlery supplying them all with lamp oil, harpoons, hard-tack lifeboat rations, Schermuly rockets and....... CLEATS!.
Well yes.
Lots of stuff.
But hey, never mind that, because, as I neared the dock, there was a roar of engines, and cheers, and guess what? A round of offshore powerboat racing was about to start! 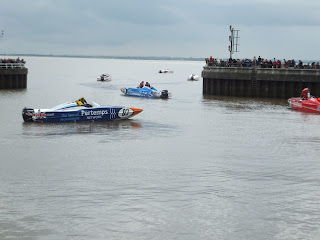 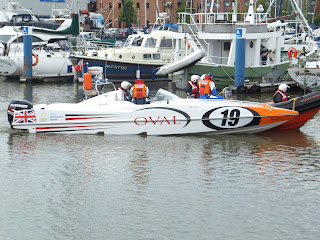 I managed to get my cleats from the chandlers. Then I stood on the harbour wall and watched the racing, but all the action was happening a bit far out, and, to be honest, I got bored watching far off things zoom about in the distance. On the shore, you've got a little bit of a commentary, interrupted by helicopter noise overhead, but you can't really tell what's going on. I'm sure it was thrilling, if you were out there. 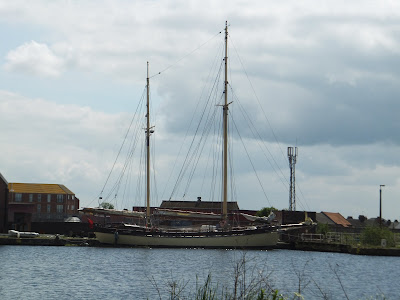 This was more my style. Not at Hull, but at Goole, on the inland end of the Humber estuary. After the powerboats, I went for a wander, had some coffee,near the old Fruit Market, and mused on Caleb Rhodes. 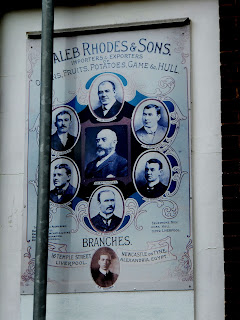 I'll bet sea-captains were delighted that they could re-stock their onion-lockers with trustworthy english onions, whilst docked in Egypt.

After my coffee, I soon needed to pee, and fortuitiously, happened upon a grand old public convenience, a rare edwardian palace of a place, spick and span and polished. 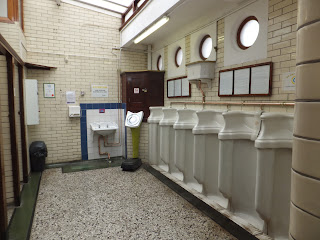 I can only guess as to whether the ladies' side is as good, and whether they get framed stories to read.... 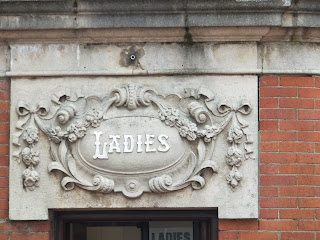 I parked alongside a rather grand building which house among other things, the Law Courts. 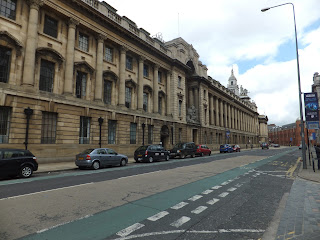 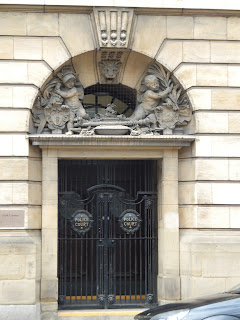 And this bit is within a sniff or two of the quaintly named street, "The Land of Green Ginger". 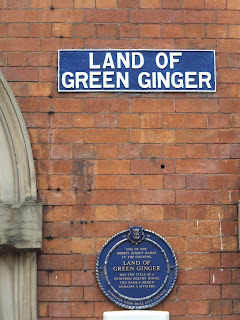 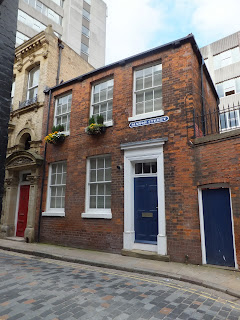 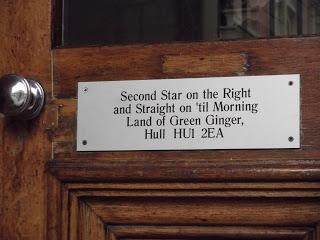 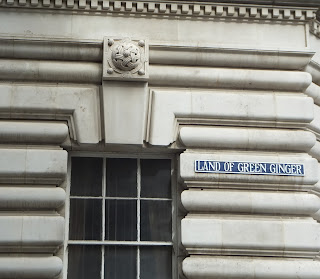 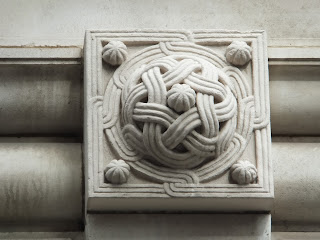 I love the stone knotwork.
A seafaring town, of course would be full of people who used knots and appreciated their decorative quality too. 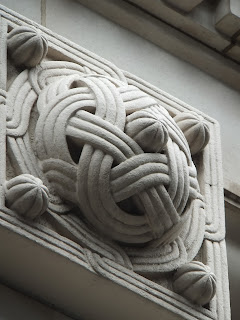 Nobody seems to know where the street's name came from, but it came into use sometime between 1640 and 1705, and has stayed. My surmise is simpler than others I've read. I'd guess that merchants stored and sold green ginger from china there. 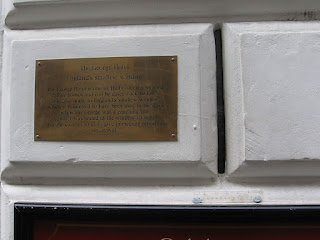 The Land of Green Ginger has also another claim to fame.
It has what is claimed to be britain's smallest window!
The gap between these two stones in the George Hotel is glazed. Back in the days of stage-coaches, there would be a porter, peering out, awaiting the coach. The George was famous for its servants always being ready when a coach arrived, this was their secret weapon.

This blogging, I've been neglecting it, and now I find my blogging muscles tiring, weak and underexercised, I'll have to call a halt now, and continue my story tomorrow, I have mermaids, and mud, and abandoned factories and more. 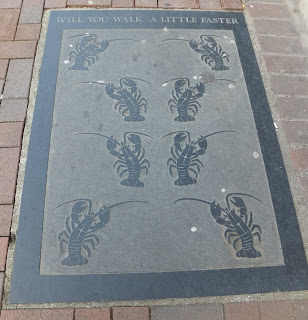