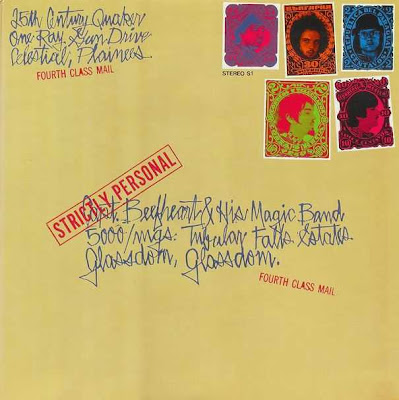 Yeah, roosters, ol' glass roosters, hymn to your age,
In a jazz-queen, white-red farmhouse
Tractors are crawlin’; people are calling,
Trees grow, I'm in a coach and I blow rich
Red, blue, yellow sunset
Where I set and you set; and I've loved and you've loved
And I've seen and you've seen

(I've seen various versions of these lyrics elsewhere, these are as close as I can get them... The line after "Roosters, old glass roosters" eludes me. "pinned to your face"?, Hymn to your age...
This was one version I found:- 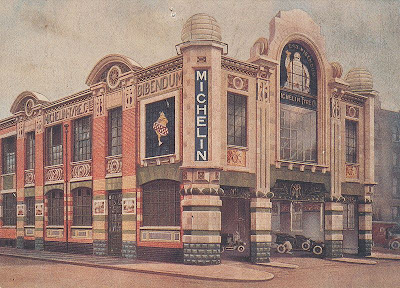 In London there is a splendid building, designed by Francois Espinasse, and opened in 1911. It was built as Michelin, (the tyre company)'s headquarters in the Fulham Road, London.
Here were offices, stores, and of course, the Michelin tyre-fitting bay. Motor Cars were still a very recent phenomenon. Most of London remained horse-powered at the time. Many vehicles were shod with solid tyres, and of pneumatic tyres, Dunlop was the dominant name in the british (and empire) market. The french company of Michelin was determined to wrest a significant portion of the market from Dunlop. To that end, it built its palace of motoring, decorated with glazed tiles and stained glass windows. The building was richly decorated, and was the domain of Michelin's fiction character, a big, jolly man made of a stack of tyres. Monsieur Bibendum.
Michelin's advertising stressed their superior ability to "drink up" the sharp stones and nails that would puncture other tyre brands. -Their motto, Nunc est Bibendum, "now is the time to drink." 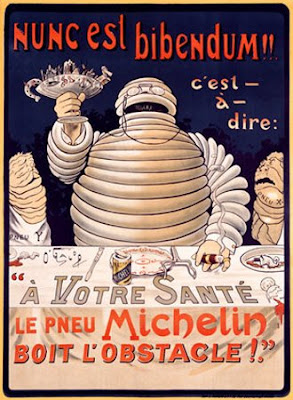 "Now is the time to drink, that's to say, to your very good health, The Michelin tyre drinks up obstacles!"
Tyre-Man, Monsieur Bibendum, making a meal of all those sharp things that puncture tyres. The Michelin tyre was, perhaps, slightly less-prone to puncture, but its other advantage was that it was much quicker to repair than its rivals which were glued to their wheel rims. Michelin made wheels and rims which required no glue, and were fast to detach and disassemble. 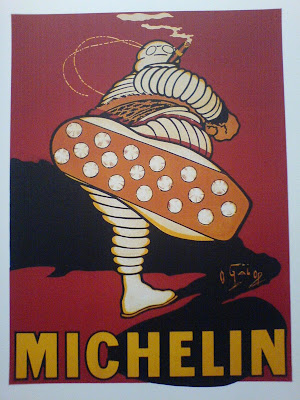 M. Bibendum shows off his new studded grip...
And what better way to prove your superiority than by crowing your successes in the new sport of motor racing, and 'reliability' trials?
To this end, the company commissioned a series of tile panels from the Parisian firm of Gilardoni, Fils et Cie, based on the art work of Ernest Montaut.
I first saw these panels in the early seventies, in 1985, Michelin left the building, and designer Terence Conran took it over, since when it has been turned into an up-market restaurant, called, appropriately enough, Bibendum. The panels and other decoration have been cleaned and restored, the place is out of my price bracket for a meal, sadly.
So the panels in my pictures? They're at the British Motor Industry Heritage Centre, at Gaydon in Warwickshire, (near Stratford on Avon), The museum is well worth a visit if machinery stirs your soul. 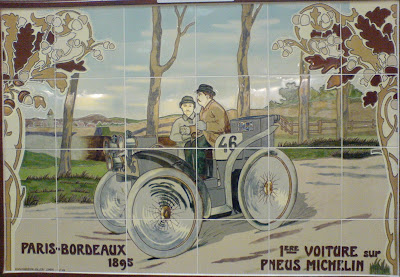 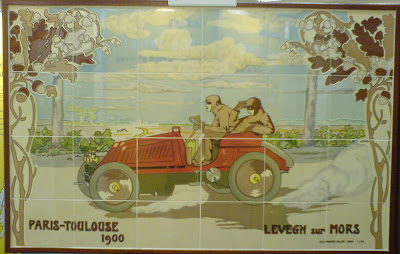 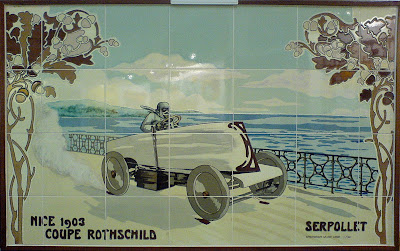 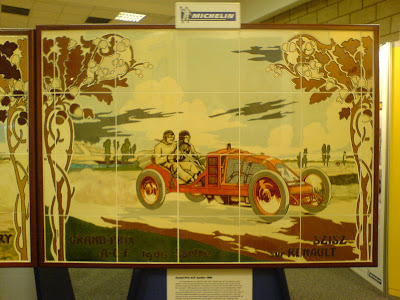 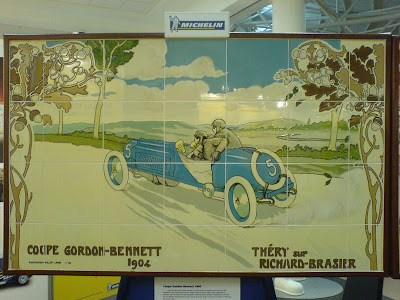 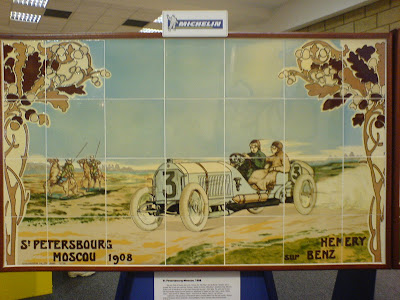 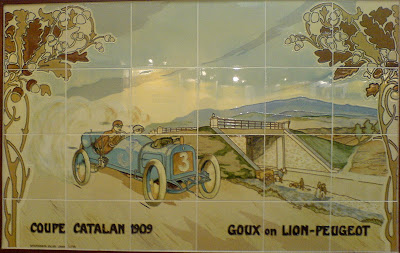 These are just a few of the 32 tile panels, -for further reading, others can be seen here.

Once, in another lifetime

.. I made things from clay. 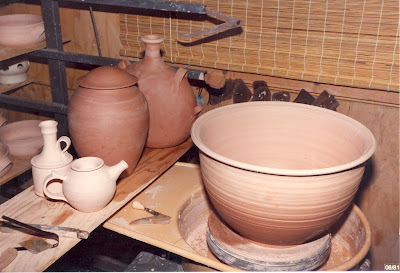 People often think that those potters who normally make things upon the wheel, can only think in terms of "round".
Not quite so.
A customer was seeking a gift for her daughter and son-in-law, on moving into their newly built house. Could I make them a ceramic house with a light inside? Hmm. "Of course.", I say, rashly. Asking for the whereabouts of this house led me to a muddy building site where I photographed, drew, and measured.... 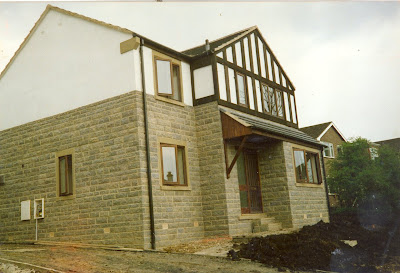 Some time later, I made this: 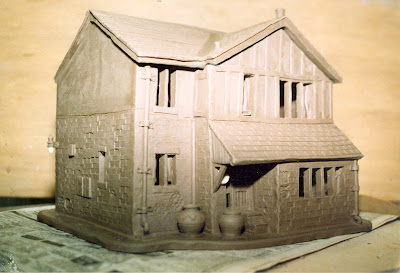 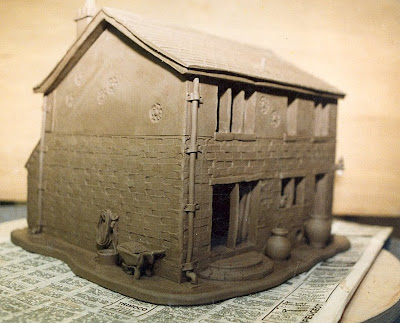 Okay, I confess I couldn't resist adding a few wheel-thrown bits. In the hope, perhaps that they'd then have to buy some big garden pots from me.
It was a success, but a rod for my own back, as lots of other people then wanted their houses to sit for a portrait. And the time involved in making one was huuuuuge.
And of course, the longer it takes, the more there is at risk in drying and firing. Break one and then redo all those hours? Argh!
And the price? Sigh. I was never good at extorting realistic sums, so I'll confess, in terms of hours versus price... I made a loss. No wonder I say I was once a potter.
I really needed a good business manager, a third party who'd do all that distasteful haggling. Toward the end, I had such a creature, a lovely gallery owner who could sell my wares for prices I'd never dreamed possible, but then.... came the change of bank-manager, the taxman's demands, the tripling of the rent........
So instead of making teapots, which I'd have loved to be doing today, I was getting very wet, pumping out industrial buildings after a humongous downpour.
Had to get a wet-vac onto the job....... A BIG one. 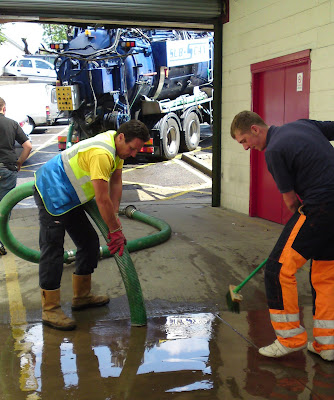 (No! I am not in this pic, I'm behind you, and no, it wasn't just a little wetness as you see here, the water was about four inches deep to start with. and stretched some sixty feet behind me. Luckily there was a manhole cover which we could lift to send the flood mostly into the depths of the earth.)
Sigh.
I'd have preferred to be making teapots. 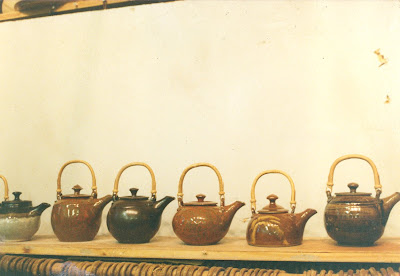