Hats, a Commodity Vital to Texas

Because I'm planning to go out for a beer with my pal, Ken, I'm a bit stuck for time, I'm working on a few long posts, full of pictures, but I thought I'd hurl these pictures into the aether for you folks, I know you all think I'm not working hard enough at this blogging. Truth is, I was up til 3 a.m. this morning, reviewing dense reams of paperwork for the U.S. Embassy in London, and booking rail tickets and a hotel, for next thursday, when I'm away to the big city for my K1 Visa medical. If you've not been there, you can't imagine just how complex the process is, and the embassy warns you, in no uncertain terms, that if you're deficient in one piece of paperwork, then it's turn around and go home, and wait another month. They have a little youtube video showing the hapless applicant who has failed to properly check the list of vital documents. The barbarian is always turned around at the moat. If I had known it would be so difficult to get permission to enter the United States, in order to marry a U.S.citizen, I'd have arranged to be born there. I'd certainly have started keeping an accurate journal and huge scrapbook of significant events and dates when I was sixteen, which is so long ago that I can barely remember who I was back then, let alone every place I lived, for over six months, and the dates I arrived and left. I can't remember the name of the guy who was my immediate supervisor in the job I had in 2001. Well, I do know he was called Chris, and someone told me he died a couple of years after I left. So I don't suppose he'd give me a reference anyway. I lived quite a few places since I was sixteen. More than many, less than some. Study and then work. I digress as usual. As I have to go out for a beer, I'll have to vaguely promise more text later. 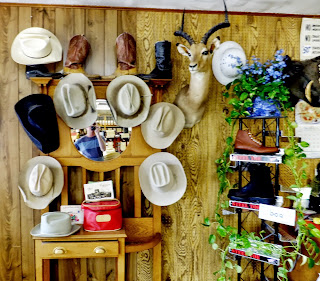 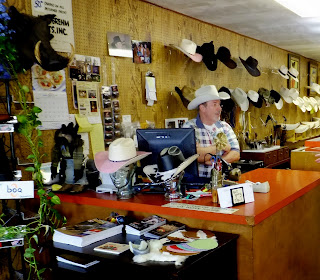 
Here, you can buy yourself a new hat, or take your grand-daddy's hat in, to be cleaned, repaired, re-blocked, and fitted to your head.
The best known names in Western hats are probably Stetson, and Resistol, who are, these days, both made in Garland, Texas by the same company.  They're not the only hatters in Texas though. There are a very few individuals left who still make made to measure, bespoke hats.
Here in New Braunfels, we met one. And it may be that one day, I get a new hat from him.
I do wear a hat, the top of my head has less thatching than it did when I was sixteen, and I find it appreciates a little shelter from both the noonday sun and the cold and wet of winter. Mostly, I wear an Australian Barmah hat, not too dissimilar to a western hat, a narrower brim though. When the weather is really nasty, I wear a Rogue leather hat, made in Mpumalanga, South Africa. I've had that hat for fifteen years now, it's been submerged in mud and in sea water, it's been used as a makeshift water bowl for my dog, it's been driven over, stomped on, and somehow it just gets better.
But it might look a bit out of place in Texas. 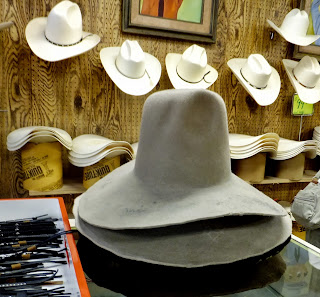 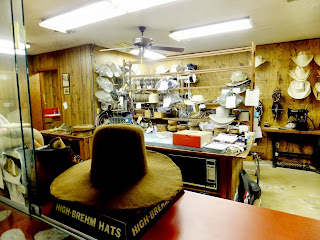 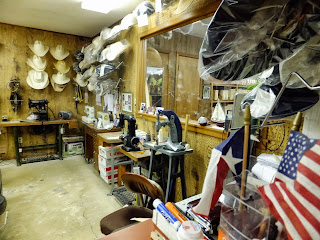 
We were made welcome, I'd actually come in to buy a pair of shoes, the  store sells shoes and workwear, the shoes I  really wanted were not in stock in my size, sadly, I'd have been happy to purchase here rather than at a possibly cheaper big outlet, because I believe in supporting real, traditional local businesses.