In my last post, of a fat-assed truck on steroids, I sparked a disparity of nomenclature in the comments.

A dually, duallie, or dooley, is a name given to a large pick-up truck, specifically one with double, or dual wheels at each end of the rear axle.

Why, you may ask, might one seek that configuration? After all, the black rubber rings on on my current transportation cost a king's ransom at every corner, why would I want a total of seven instead of five?

Well, the dooley/dually needs them because of its humongous load rating. The biggest two, the Ford and the Dodge Ram, are both rated to haul close-on eight tons. This load is too high for a single set of rear tyres (tires)... In most cases, especially with a crew cab (double cab)... there's not really enough room in the bed for eight tons of anything. But there's room for a shiny chrome ball.

That shiny chrome ball takes a gooseneck trailer-hitch,  which hooks on a big articulated traile so its noseweight bears slightly forward of the back axle, making it far more stable, and more easily manoeuvred than the  more common rear end mounted ball coupled trailer.
Musical break... Tom Dooley.
Tom Dooley was actually Tom Dula,  a poor boy, a soldier who on returning home from being a confederate prisoner of war, took up again with his sweetheart. Actually, he had a lot of sweethearts. One disappeared, and was later found, with a single stab wound to her heart.
He was hanged for this, though it was a matter of considerable debate whether it was Tom who did the deed, or his primary lover, a married woman called Anne, or perhaps her husband, seeking to get rid of his wife's lover forever.
More here;- http://www.blueridgecountry.com/archive/tom-dooley.html
Here's an alternative version:
Hang your head, Tom Dooley,:
Hang your head and cry;
You killed poor Laurie Foster,
And you know you're bound to die.
You left her by the roadside
Where you begged to be excused;
You left her by the roadside,
Then you hid her clothes and shoes.

You dug the grave four feet long
And you dug it three feet deep;
You rolled the cold clay over her
And tromped it with your feet.

"Trouble, oh it's trouble
A-rollin' through my breast;
As long as I'm a-livin', boys,
They ain't a-gonna let me rest.

I know they're gonna hang me,
Tomorrow I'll be dead,
Though I never even harmed a hair
On poor little Laurie's head."

"In this world and one more
Then reckon where I'll be;
If is wasn't for Sheriff Grayson,
I'd be in Tennesee.

You can take down my old violin
And play it all you please.
For at this time tomorrow, boys,
Iit'll be of no use to me."

"At this time tomorrow
Where do you reckon I'll be?
Away down yonder in the holler
Hangin' on a white oak tree.

Hang your head, Tom Dooley,
Hang your head and cry;
You killed poor Laurie Foster,
And you know you're bound to die.
The song was hugely popular soon after his death. Wiki says "Impoverished Confederate veteran Tom Dula (Dooley), Laura Foster's lover and probable fiancé, was convicted of her murder and hanged May 1, 1868. Foster was stabbed to death with a large knife; the brutality of the attack partly accounted for the widespread publicity the murder and subsequent trial received.
Dula had a lover, prior to his leaving for the war, named Anne Melton. It was her comments that led to the discovery of Foster's body, but Melton was acquitted in a separate trial based on Dula's word. Dula's enigmatic statement on the gallows that he had not harmed Foster but still deserved his punishment led to press speculation that Melton was the actual killer and that Dula simply covered for her. Melton, who had once expressed jealousy of Dula's purported plans to marry Foster, died insane a few years after the homicide. Thanks to the efforts of newspapers such as The New York Times, and to the fact that former North Carolina governor Zebulon Vance represented Dula pro bono, Dula's murder trial and hanging were given widespread national publicity. A local poet, Thomas C. Land, wrote a popular song about Dula's tragedy after the hanging.
A man named "Grayson," mentioned in the song as pivotal in Dula's downfall, has sometimes been characterized as a romantic rival of Dula's or a vengeful sheriff who captured him and presided over his hanging. Some variant lyrics of the song portray Grayson in that light, and the spoken introduction to the Kingston Trio version did the same. Col. James Grayson was actually a Tennessee politician who had hired Dula on his farm when the young man fled North Carolina under suspicion and was using a false name. Grayson did help North Carolinians capture Dula and was involved in returning him to North Carolina, but otherwise played no role in the case.
Dula was tried in Statesville, because it was believed he could not get a fair trial in Wilkes County. He was given a new trial on appeal but he was again convicted, and hanged on May 1, 1868. His alleged accomplice, Jack Keaton, was set free. On the gallows, Dula reportedly stated, "Gentlemen, do you see this hand? I didn't harm a hair on the girl's head."

Down by the barn there's a horse-trailer. Or here's one I tried to catch...

See? Both trailers being pulled by doohickeys. Monster horse-shifter. 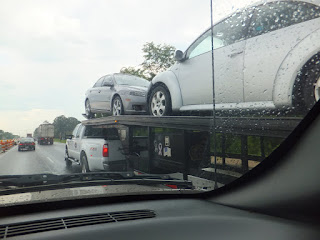 Or car-transporter.
Now Ford, in its literature, called them duallys, but GM and Chevy, dooleys... Either one's right, or wrong, however you like. The Red Dirt Mule is adamant they're Dooleys in Georgia, never duallies. And one of the abovr dooleys belongs to her sister, so she must be right, yes?