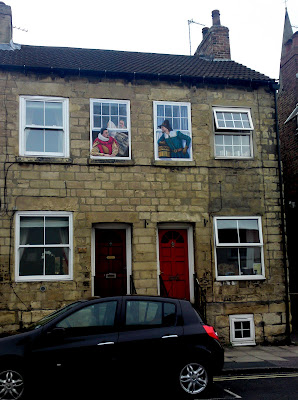 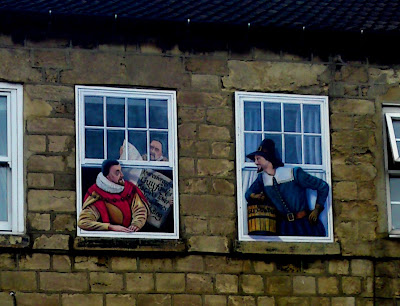 Pictures of Guy Fawkes in Knaresborough, Yorkshire.
As part of Knaresborough's "FEVA" arts festival, somebody had the bright idea of reinstating various bricked-up windows and doorways with trompe l'oeuil paintings.
Seen above are the windows alluding to Guy Fawkes, who was born in York and lived for some time at Scotton, a village close to Knaresborough.
For those readers who are not british, Guy Fawkes was the man of whom it it said "He was the only man with honest intent to ever enter parliament"
In fact, he was one of a group of plotters who sought to overthrow the king and parliament by blowing them all to pieces with a huge bomb made of 36 barrels of gunpowder. The plot was discovered, Fawkes was apprehended in the cellars below parliament, in the early hours of the morning when the king was due to open the year's sessions.
In Britain, every year since, on the fifth of november, people hold bonfires, let off fireworks, and burn effigies of Guy Fawkes.
The country was ruled by a protestant king, which catholics such as Fawkes believed was unlawful.
It was held that a king ruled by the will of god and was placed in his reign by god. However, to a catholic, a king who did not acknowledge the pope as god's representative on earth, was a heretic, and therefore could not be ruling by god's will...
Fawkes was the man who was to set a torch to the fuse. He and his co-conspirators were all arrested or killed whilst attempting to escape.
They were hung, drawn, and quartered, Fawkes is the only one widely remembered. 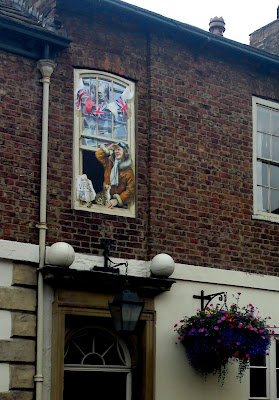 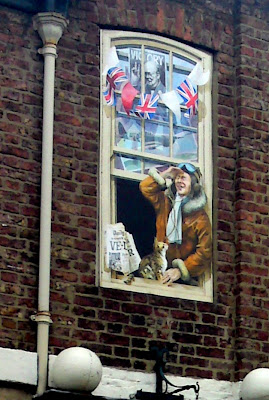 The next pair of pictures are of  "Ginger" Lacey . Lacey went to King James Grammar School, Knaresborough, before the second world war, when he became an R.A.F. pilot,  and during the Battle of Britain became one of the top fighter aces. 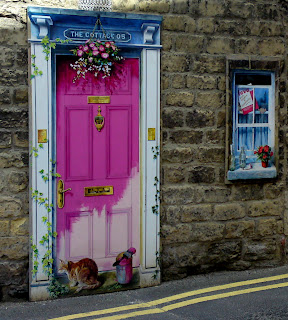 I've lost the leaflet from the tourist office, so I'm not sure of the other artists involved, and the various involved websites, FEVA, and Yorkshire Forward, which between them commissioned and sponsored the project are surprisingly uninformative on the subject, which is, I think, a shameful way to treat artists.