Half an hour ago, I'd never heard of a Waboba.

Well, now I have, and so have you. And here's a video that shows the strange things that happen when you throw things at the surface of water. Like skimming stones, we've all done that, no?

(did you know that children played that game in Roman times? "And when we came to that place where the little ships, drawn up on an oaken framework, were lying at rest supported above the  ground-rot, we saw some boys eagerly gesticulating as they played at throwing shells into the sea. This play is: To choose a shell from the shore, rubbed and made smooth by the tossing of the waves; to take hold of the shell in a horizontal position with the fingers; to whiff it along sloping and as low down as possible upon the waves, that when thrown it may either skim the back of the wave, or may swim as it glides along with a smooth impulse, or may spring up as it cleaves the top of the waves, and rise as if lifted up with repeated springs. That boy claimed to be conqueror whose shell both went out furthest, and leaped up most frequently."
Minucius Felix,  about 1700 years ago.)


Update: Now for something related: During the second world war, the Allies made numerous bomber raids to attempt to disrupt German war-production.  Much of Germany's heavy industry, building tanks, aircraft, warships, weaponry, was dependent on the factories of the heavily defended Ruhr valley. A british scientist called Barnes Wallis had an idea that massive disruption could be caused by destroying the dams on reservoirs in the valley, causing a deluge, and denying industry of hydro electric power and water. These dams, however, were massive concrete structures, impregnable to an ordinary bombing attack. Torpedoes might be effective, hitting deep below the water line, but the german defenders had stretched torpedo-stopping steel wire nets in the water. So Wallis hit upon a plan to build a new type of bomb. One which would skip over the water, over the defences, hit the dam, and roll down its face before exploding deep underwater. 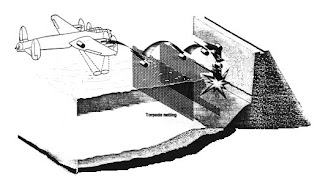 Nothing like this had existed before. How do you make a four ton steel bomb skip like a pebble? The answer? You build a special bomber to carry it in a cradle, you fit a motor to spin the bomb, and you drop it, still spinning, at a precise height, distance, and velocity.


The result? In the Möhne and Ruhr valleys 11 factories were totally destroyed, 114 seriously damaged, 25 road and rail bridges were destroyed and throughout the region power, water and gas supplies were seriously disrupted. The breaching of the Eder dam caused severe disruption to road and canal communications and destroyed over 50 hectares of valuable agricultural land. In the flooding below the Möhne there were 1,294 casualties including 593 foreign workers. The flooding below the Eder resulted in a further 47 deaths.

20,000 men were needed to work on repairing the damage, and were taken from Hitler's "Atlantic Wall" fortification works, for the remainder of the war, an extra 10,000 troops were diverted from other duties to guard the dams against further attacks.

Of the aircrews that took part, only 11 of the 19 who set out returned. 8 aircraft and 56 men were lost. Three men survived and were taken prisoner.

Was it justified, or was it murder? I suppose that depends on how vital you think it was to stop the German war-machine, a nation which started the war by invading its neighbours and enslaving more than a million of its own people. A nation which invented the "Blitzkrieg" or "Lightning war" in which the first phase of attack was the systematic bombing, with fire-bombs and high explosive, on civilians in towns and cities.

For the record, Barnes Wallis never forgave himself for the death toll his invention produced.
It was never used again.

Second Update. britain's Channel 4TV commissioned a documentary of a Cambridge University engineer, Dr Hugh Hunt, attempting to recreate Barnes Wallis' device. Wallis' notes are gone, nobody knows the exact details. Dr Hunt set out to build a bouncing bomb, and hired a team of Canadians to build a dam... and another team of Canadians to bomb it, (Some of the original 'Dambusters' crews were Canadian), using a 1940's Douglas DC4. Here:

The Royal Society of Arts was founded in a London coffee-house in 1754, as the "Society for the Encouragement of Arts, Manufactures and Commerce".

Ever since that date it has hosted a series of lectures on diverse subjects, and more recently, has published some of those lectures in a form accompanied by animated illustration. The talk here is fascinating (to me, at least), but enhanced, humorously so by the illustration.
Long ago, I was an associate member of the British Society for the Advancement of Science, and attended some great lectures, where enthusiastic scientists would expound upon subjects you might think from the title to be dry as dust, and hold all the audience, the high-fliers, and the plodders like me enthralled.  I love to hear impassioned and articulate people talking about their subject, I may only glean a few pearls of wisdom therefrom, but to me, any day where I learn something new, is a day not wasted.

I have no logfile. Unlike my computer, I can't tell you the rate at which I forget stuff. Or misfile it. I liken my brain to a chaotic library where someone keeps shuffling the index cards, and perhaps destroying a few. The information may be in there, somewhere, but I have no means of reliably accessing it. On the other hand, the brain-librarian bot, wandering about aimlessly in there, can come up with the oddest of stuff that I didn't know that I knew.
Like the fact that Doctor? or Professor? Thaddeus C. Lowe was appointed the first official "Aeronaut" of America.  He persuaded President Lincoln that the lighter than air balloon had great tactical value on the battlefield.............

Anyway. enough of my muddled brain, here's a cleverer one altogether.