The Curtain Rises. And Billows.

The Scene: centre stage: darkness, a bedroom,  a bed.

Him: I can't believe you did that!

Him: You just shattered the silence with a barrage of bottom-burps!

Her: Sam Houston did it.

Him: Sam Houston was in our bedroom?

Him: And he got here how?

Her: In his buggy.

Him: So you're saying, Sam Houston, (first president of the Republic of Texas), who died in 1863, resurrected himself, and harnessed up his ghostly horses, drove in his buggy to our bedroom, where he let loose a trombone solo in the vicinity of your rear end, then got in the buggy, flicked the reins, and trotted off down the stairs and into the night?

They go back to sleep.
Outside, ghostly hooves and creaking of harness fading to the distance.

In the morning he asks her about Sam's visit. She has no recollection. And no shame at trying to pass off her farts as those of a hero of the Texas revolution.

From now on, mystery occurrences in this household, from trumps to empty ice cream cartons in the freezer, will be blamed on Sam Houston.


(When we first met, back in 2007, and she visited me in England, as we were carrying her compendious baggage into the house, somebody farted, and it wasn't me. She looked me in the eye, and with a straight face, said "did you hear that?" "I did, I heard a fart."
"No", she said. "A bark.  -it's the barking spiders."
She persisted in trying to tell me the sounds I kept hearing were made by barking spiders, a subset of arachnid I had never previously encountered. And they had followed her, from, she thought, the airport in Atlanta, Georgia, perhaps stowing away in her baggage.)


More from the bedroom: The Morning After.

If This Blog was a Delivery Company...

Posted by soubriquet at 11:47 pm No comments:

Shock News!: Grit in the Gears Written by Robot! 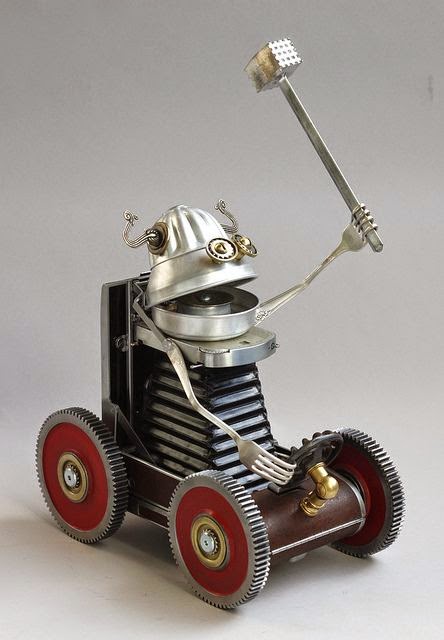 Picture found by Red Dirt Girl on Pinterest, this is an assemblage by Brian Marshall. 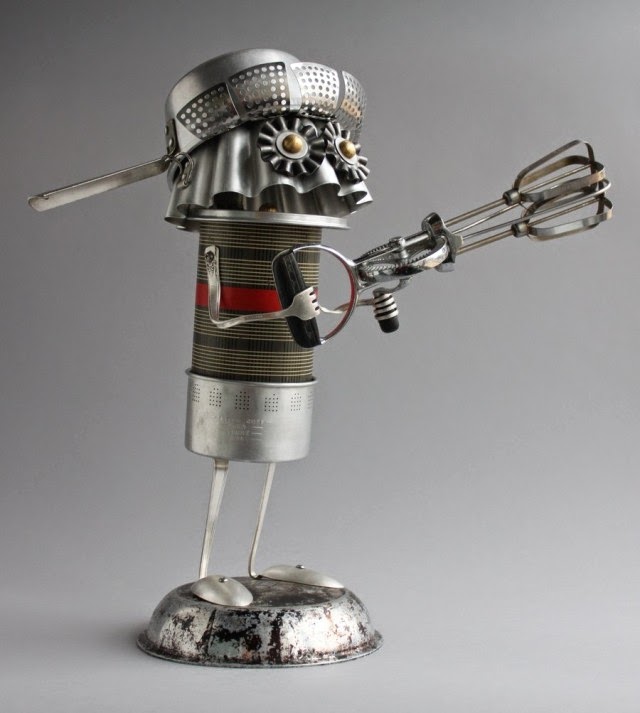 The author of this blog sometimes feels like he's a machine, and right now he's got a cramp in his left side rib actuators. He identifies with these fellows.
Un-grit my gears, gimme oil!
Posted by soubriquet at 11:27 pm 3 comments:

"Nothing is More Dangerous to Men Than a Sudden Change of Fortune". -Marcus Fabius Quintilianus (Quintilian).


I have never put my faith in Horoscopes. I don't believe the relative position of the stars in the sky, as viewed at and from the place of my birth, can realistically be said to predict my character, nor my fate.

I hold no truck with the Tarot, nor Gypsy Rose Lee, nor the lines on one's hand, nor the disposition of tea dregs, nor the entrails of a chicken as guides to the future.

Not after this, anyway: A worker at the Wonton Company's factory in Houston, Texas, was recently found deceased, in the dough mixer used to make Fortune Cookie dough. Foul play not suspected, "Death by Misfortune"?

"The Wonton Food company operates facilities in New York, Texas and Tennessee, where it manufactures food products including noodles and wonton wrappers, and is one of the leading fortune cookie makers in the country, making around four million cookies a day in its New York headquarters and a smaller number in its Houston factory."

If only there was some way a fortune-cookie maker could predict the future?

(It was NOT this machine, but probably something very similar.)

p.s...... I learned this not by local news, despite being fairly close to Houston, but Via "Nothing to do With Arbroath", a blog which has been a regular read for me for years, I recommend it, and if you don't know where Arbroath is, then don't worry, because the blog is NOTHING to do with Arbroath.


pps: I'm aware that the event is, in fact, a terrible tragedy. But I can't resist making quips about the situation. "He was a crazy mixed-up kid....."