And So to Bed 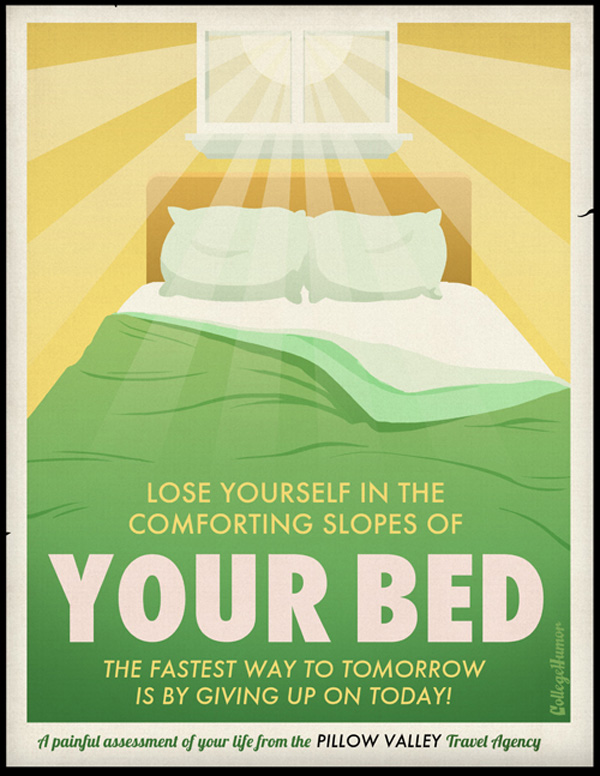 Not me. I'm getting out of my bed and travelling 5000 miles tomorrow.

Poster via
Posted by soubriquet at 4:36 pm 3 comments: Richard Thompson , from Rumour and Sigh .

Oh says Red Molly to James "That's a fine motorbike.
A girl could feel special on any such like"
Says James to Red Molly "My hat's off to you
It's a Vincent Black Lightning, 1952.
And I've seen you at the corners and cafes it seems
Red hair and black leather, my favourite colour scheme"
And he pulled her on behind and down to Boxhill they did ride
Oh says James to Red Molly "Here's a ring for your right hand
But I'll tell you in earnest I'm a dangerous man.
For I've fought with the law since I was seventeen,
I robbed many a man to get my Vincent machine.
Now I'm 21 years, I might make 22
And I don't mind dying, but for the love of you.
And if fate should break my stride
Then I'll give you my Vincent to ride"

"Come down, come down, Red Molly" called Sergeant McRae
"For they've taken young James Adie for armed robbery.
Shotgun blast hit his chest, left nothing inside.
Oh come down, Red Molly to his dying bedside"
When she came to the hospital, there wasn't much left
He was running out of road, he was running out of breath
But he smiled to see her cry
He said "I'll give you my Vincent to ride"

Says James "In my opinion, there's nothing in this world
Beats a 52 Vincent and a red headed girl.
Now Beezers, and Triumphs, and Nortons won't do,
Ah, they don't have a soul like a Vincent 52"
Oh he reached for her hand and he slipped her the keys
Said "I've got no further use for these.
I see angels on Ariels in leather and chrome,
Swooping down from heaven to carry me home"
And he gave her one last kiss and died
And he gave her his Vincent to ride.

I know. I've posted this before. It's still as good as it was back then. Enjoy!
Posted by soubriquet at 4:13 pm 2 comments:

Last year, in July/august, I went to Texas, and saw this house. It just needs a lick of paint....

Tomorrow morning I shall leave the house at five a.m., and set off for Texas again. Blogging has been a bit erratic and sporadic over here, of late, mostly because my pencil broke and the dog ate my homework. Well, probably more that I couldn't think of anything much to say. The Red Dirt Girl often says that I should start a blog of comments I've left on other blogs, because I write blogpost-length comments, and comment-length blogposts. She's probably right. Anyway, I'm a-hoping that she hasn't forgotten I'm coming, and will be waiting in the airport at Houston.
She might as well set off from home about half a day after the plane lands, because last time, the line in purgatory seemed to last forever. Shuffling souls being tormented by demons in uniform. Show your papers, put 'em away, show your papers, and so forth. Several flights-worth of non U.S travellers had landed, but only a handful of the many booths were open. And the guys running them, well they were there for the full shift, whatever, so why should they care how long I'd been shuffling that interminable zigzag line?
Lordy it's frustrating. I know, I know, they have a job to do, keeping undesirables out, but me? I'm lovely.  I really am. I even know a few words of The Yellow Rose of Texas....

Anyway, after a few hours I might make it back out into the sunshine, with my sweetheart.

Oh. And I've got the space centre (geesh!, center), on my list, and there's a weather museum,  presumably full of the winds of yesteryear, and very old clouds stored in jars, and there's a great art museum where they wouldn't let me take any photographs, and?
I'm open to suggestions. We're based about 40 minutes north of downtown Houston.
I kinda hanker for seeing the battleship "Texas", which fought in two world wars.
I liked the idea of a flight on a B17, until I saw the price.

What else? Well, we're heading toward Austin and San Antonio, and small towns in between. I'm looking to relocate, ya see, and I need to find me a saloon to get a job in. I kinda fancy a career as .... A Floozy-Wrangler Aaah haha hahahaaaaaaaaa!!!!!

(The ouch is in anticipation of what she'll do when she sees my chosen career.)
Posted by soubriquet at 4:08 pm 5 comments: