In just a few hours it will be Veterans Day in the United States,

The 11th hour of the eleventh day of the eleventh month, the time the guns were to fall silent, the end of the first world war.
Who, I wonder, was shooting on that morning, and why? what did they hope to achieve?  A last kill before shooting season ends?

Anyway, it was over, it marked the end of "The War to End All Wars",  at the end of which, humans kept on developing weapons and seeking wars in which to use them.

Nonetheless, we hold remembrances, we Brits wave our poppies, Americans their flags. Our neighbourhood is full of flags, very patriotic, these Americans. Veterans day is a holiday, and  retired service personnel will wear their medals, badges, uniform caps with pride, strangers will thank them for serving.  It's not all about the dead, the living are remembered here too. 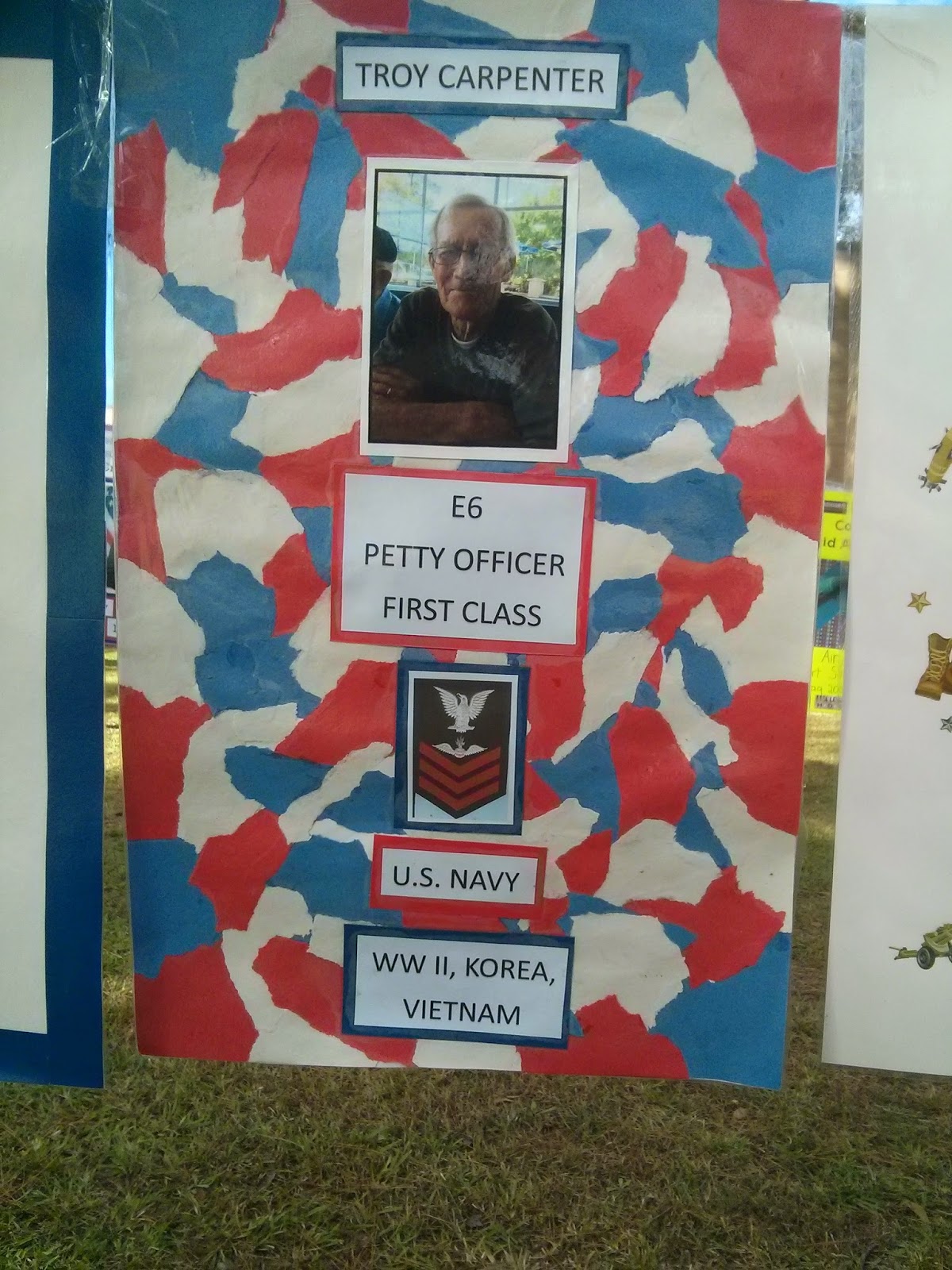 The school does a yearly project, where each pupil is set to meet and interview a veteran of the forces, to photograph and make a poster featuring that person, on the back is the interview, dates served, nature of service etc. My step-son interviewed a man who's become a friend of mine , Troy is one of a group of friends who meet once a week  over lunch. They all have stories. I thought I'd post here some pictures I took outside the school. 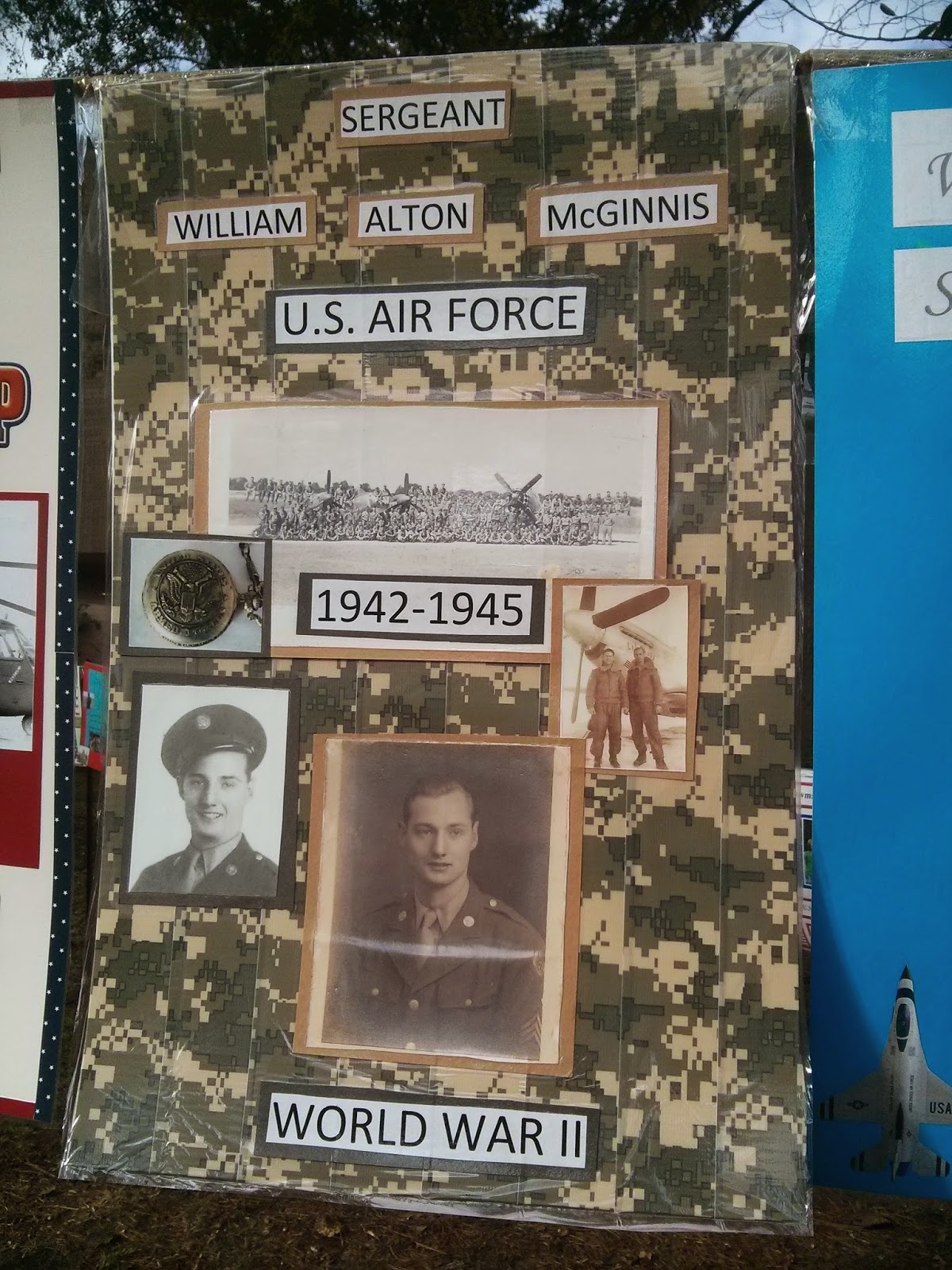 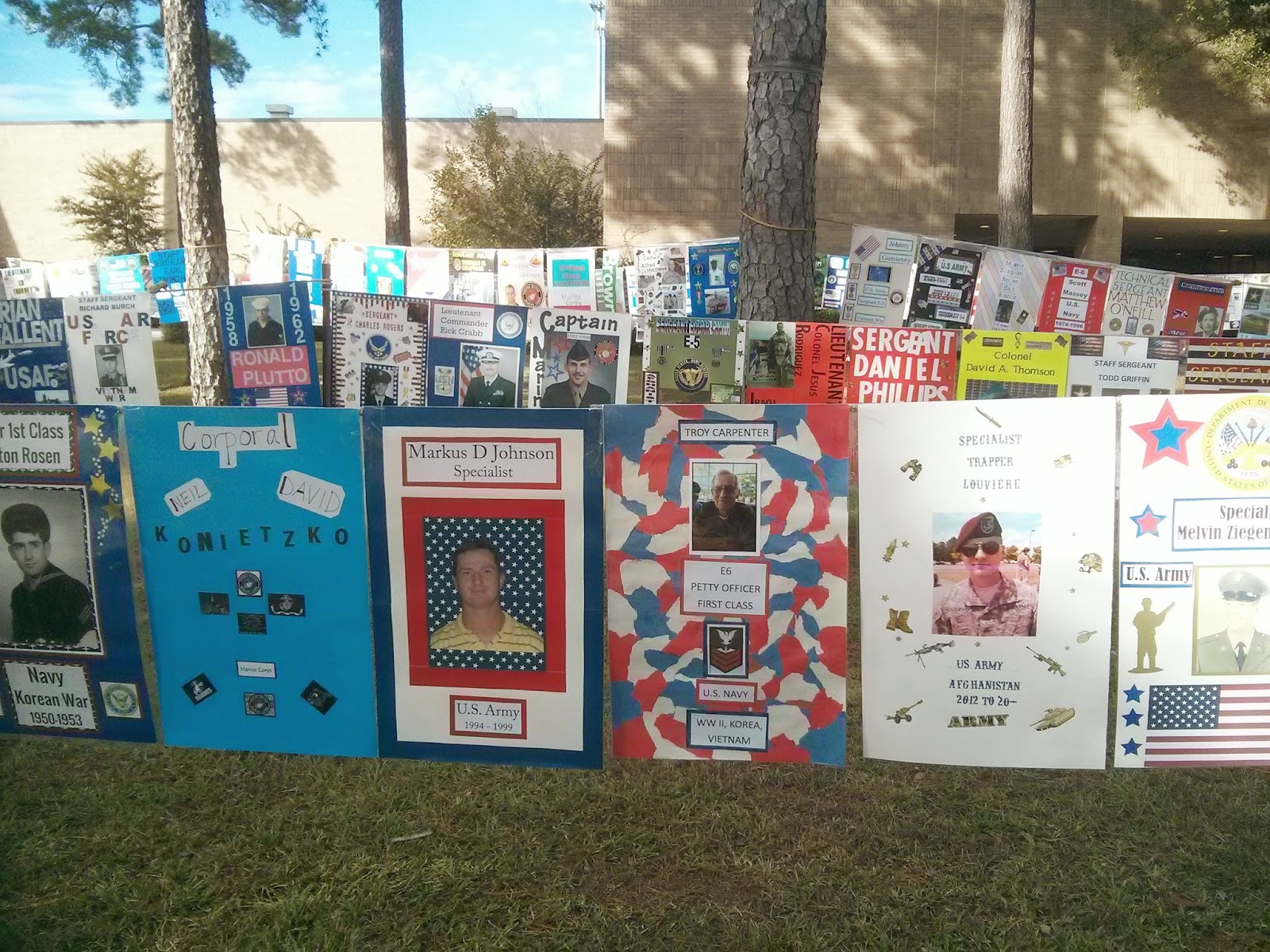 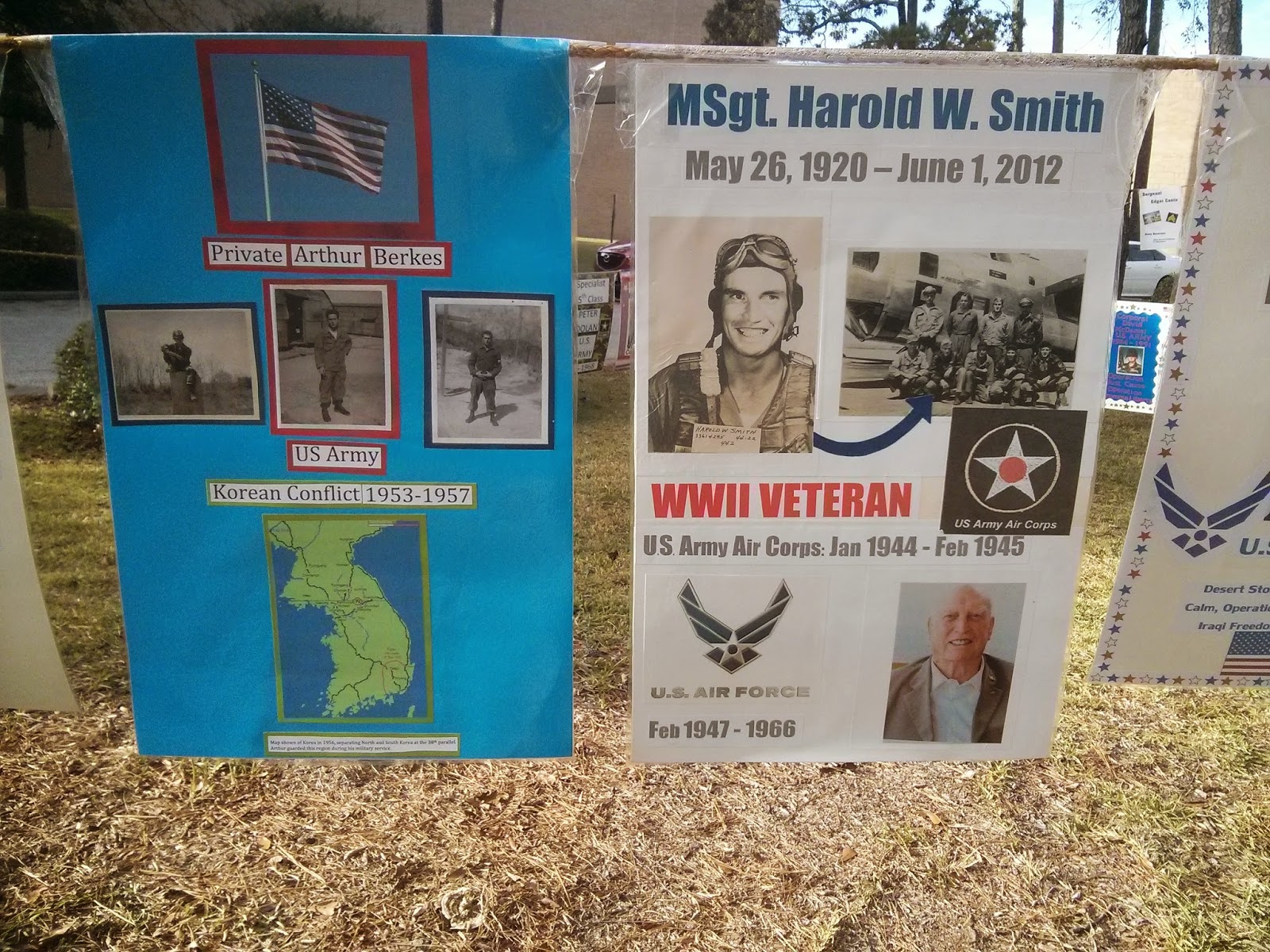 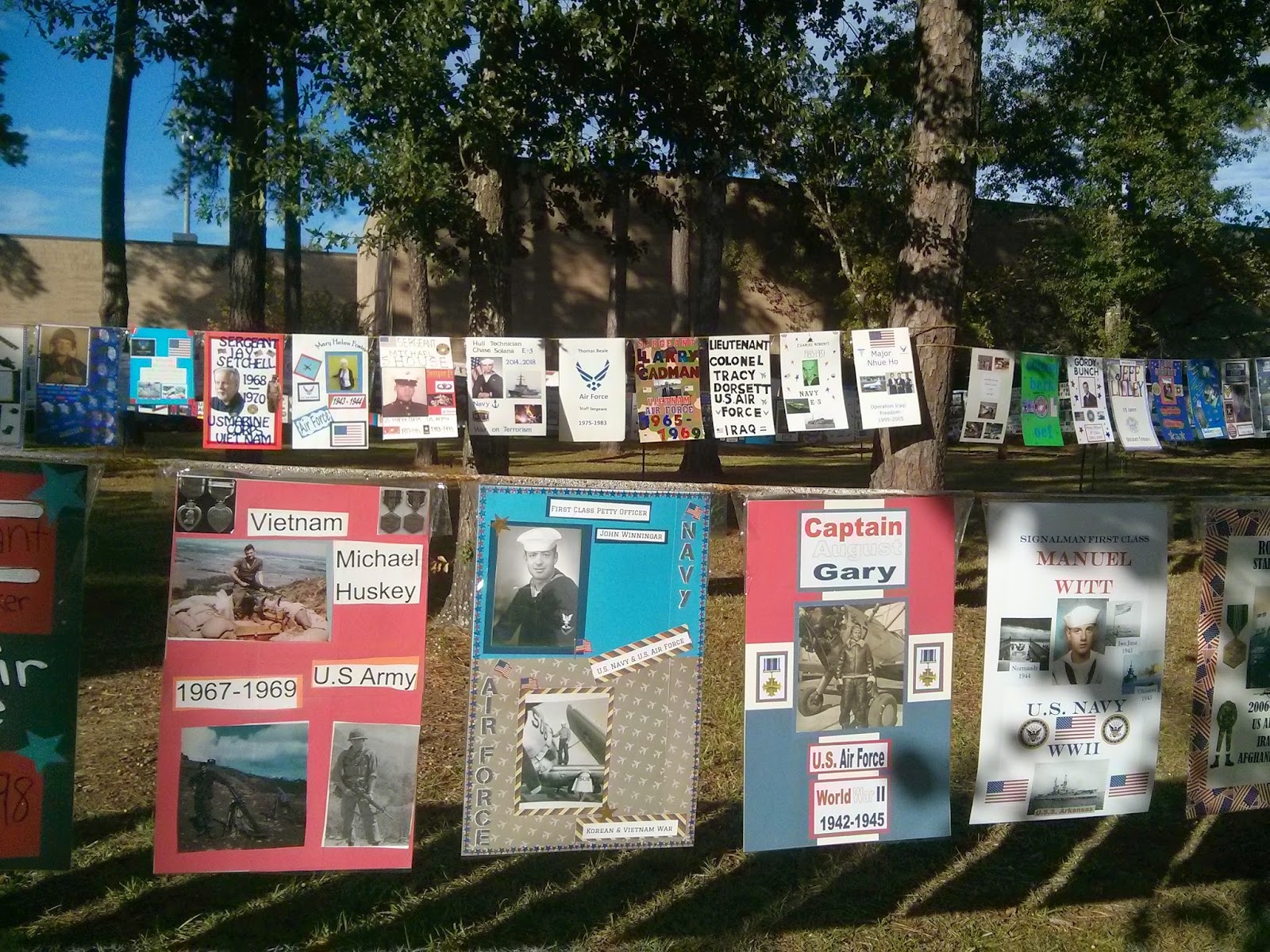 So many are represented, from the humblest rank to the dizzying heights of gold braid, veterans from pre WWII to the present day. Some of these kids have dads, uncles, brothers, mothers, sisters, aunts, in the military, in harm's way, serving, prepared to give their lives if need be.
Whether or not I believe in the wars they are sent to fight, I have the greatest respect for them. The old guys I have lunch with on a thursday have so many stories, war cold and hot. And of tragedies too.

Tomorrow, they are saluted. But here, as in Britain, there's another reality, of the veterans who failed to reintegrate, the PTSD, the alcoholics, the guys who hold up cardboard signs "Ex soldier, Hungry, Homeless", and I, like the other drivers, check my door is locked, try not to meet the gaze... And drive on by.
Posted by soubriquet at 9:39 pm 7 comments: