Right now, Iceland is in the news in Britain, mainly because of the collapse of its banking giant, Landsbanki, and the subsequent suggestion by the Icelandic government that the reported several billion pounds of money placed there by british investors, (such as the Local Government Association (LGA), which represents local councils, which said that 108 of them had deposited nearly 799 million pounds (one billion euros, 1.4 billion dollars) in Icelandic banks) is unlikely to be paid back.
Transport for London, the agency responsible for the capital's public transport, had 40 million pounds invested with Landsbanki's subsidiary, Kaupthing Singer and Friedlander. Fifteen police authorities had nearly 100 million pounds invested in Icelandic banks, according to the Association of Police Authorities, with London's Scotland Yard authority saying it had 30 million pounds invested.
This put our government in such a tizzy that Prime Minister Gordon Brown was moved to a cunning stroke... Let's use our newish laws designed to stop terrorists money laundering through british banks.... And seize all Icelandic assets in Britain!

Some of that money's not been there very long. Foreign banks got a lot of british money as british banks wobbled under the hit they took with the collapse of Lehman Brothers in the U.S.
Here's the take on Landsbanki's Icebank on the 18th September, less than a month before it collapsed.


"A large number of savings account holders in the UK transferred their funds to Icelandic banks on Monday, reports Mbl.is Icesave, a savings account offered by Landsbanki, and Kaupthing Edge, a similar high interest product offered by Kaupthing Singer Friedlander, saw a surge in business after UK customers lost faith in their own banks, according to Kaupthing.
“Savers in the UK became somewhat nervous of their banks and moved their money over to us,” said Gudni Adalsteinsson, managing director of Kaupthing’s Treasury Department.
The share prices of major British banks such as HBOS and Barclays plummeted in value on Monday, following the collapse of Lehman Brothers investment bank in the US. Kaupthing said that Monday was in fact the fourth best day of business since it launched its Edge savings account in February this year. The two Icelandic banks have completed this year’s refinancing of ISK 820 billion (USD 8.7 billion, EUR 6 billion) worth of loans and next year’s is well underway."

These market experts are so wise, we should always trust their utterances, shouldn't we?

This rather sets the cordial relations between the U.K. and Iceland back a bit.
Almost to the Cod Wars...
Or the British invasion of neutral Iceland in 1940.

Anyway, it seems we are seizing Iceland's assets even as I write. I would argue that using the anti-terrorism laws is of course, nonsense, and I expect Iceland to challenge the legality of Brown's move, and he's hardly in a position to criticise the Icelandic state's lack of foresight, as Prime Minister Brown, with a number of years as Chancellor of the Exchequer, britain's top money-man, under his belt, proved no more prescient as british financial institutions collapsed and were bailed out by the state, following the New York debacle.
Here to Cheer you up, is Iceland's nuttiest song-pixie, crazy as a box of frogs, but oddly appealing :-

It's oh so quiet : it's oh so still
you're all alone : and so peaceful until

It's oh so quiet : it's oh so still
you're all alone : and so peaceful until

You ring the bell (bim! bam!)
you shout and you yell (hi ho ho!)
you broke the spell
gee, this is swell you almost have a fit
this guy is gorge and I got hit
there's no mistake : THIS IS IT

'Til it's over and then : it's nice and quiet
but soon again : starts another big riot 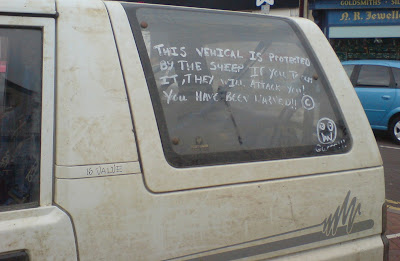 As usual, Click for Embiggenment
My pic, by the way, not outsourced or googled or whatever.

Sent by a friend. Source of picture says it was taken in Bristol U.K, recently. 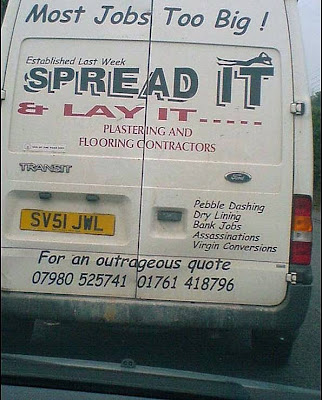